Six years after deciding that our family was going the route of self-directed education, it’s almost hard to remember what we used to think. When I think about my wife and I earnestly discussing whether we’d choose a conventional public school (the diversity!) or a conventional private school (the opportunities!), it’s like I’m a fly on the wall in the house of people I barely recognize.

But that was us. My wife Taylor and I both went to college to be teachers, and while I never “used” my teaching degree, my wife taught in a well-to-do private elementary school for three years before we had our first son, Oliver (Ollie). We had both worked with children for the duration of our adult lives, and thought we pretty much had things figured out. Thankfully, Oliver became our greatest teacher. 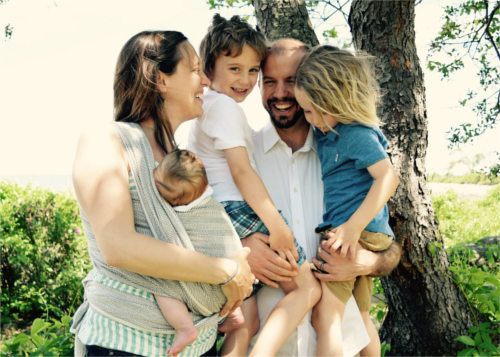 You see, Ollie didn’t care for daycare. He didn’t care for doing things on other people’s schedules, and had no interest in being dropped off with strangers, or sleeping alone, or any of the other plans that the well-meaning adults in his life had for him. We were at a loss. We figured we’d be awesome at parenting, and six short months in, we felt completely clueless.

And then Taylor came home from a continuing education seminar having seen a video that she just had to show me. It was Ken Robinson’s now famous RSA Animate video called “Changing Education Paradigms.” When it was over, I sat there feeling stunned. My mind was swirling. Schools could be a detriment to creativity? Kids might be better off choosing what interests them, instead of the established curricula designed by PhD touting grown-ups? I watched it again. More revelations. School as we know it was designed in the industrial era, and is closely modeled after factory assembly lines? ADHD might be over-diagnosed?

I started to process my own childhood through a new lens. I realized I didn’t really feel entitled to pursue my own passions. I couldn’t recall times where the teachers in my life took my goals and dreams seriously. I could only recall feeling worthy when I demonstrated knowledge or skills in all of the things they thought were important. As I held my infant son in my arms, it all felt so real. Did I want to sign this little child up for 12 years of trying to please others, or was there another way?

As we went down our personal self-directed-learning rabbit hole, we were even more shocked. These weren’t new ideas.

We read John Holt’s works, found Peter Gray’s books and blog, read about Sudbury Schools, and Summerhill. People had been unschooling for decades (well, millennia, but you get the idea), and whole schools had been dedicated to self-directed learning that we had never even heard of.

And that was really the weird part. We had both majored in education in college. Why had this approach to learning never even been mentioned? It’s not like our professors brought it up, and then made reasoned cases against why it didn’t work. In two different states, at two different universities, a whole segment of child development theory had been omitted entirely. And every teacher I’ve ever talked to since has had the same experience.

Now I don’t hope to offer up any conspiracy theories as to why that might be the case, but we did find it more than a little curious. And we did continue to dig to see what we could find. It didn’t take very long – within three weeks we decided that we were going to unschool our children. What’s more, we wanted to help bring these ideas to others. We considered starting a school, but the red tape involved was too intimidating. Instead, we took a smaller step – we found a summer camp that would let us work there and let the kids do (pretty much) whatever they wanted to.

The results were miraculous. We’ve now done six summers of self-directed summer camp, and the kids continue to surprise us each year. All of the little objections and fears that we had upon initially learning of this approach have slowly been rinsed away. The kids don’t try and walk all over us – they value us for creating a community where their voices are heard. The kids continue to try new things, because kids are wired to try new things. And it means so much more when they try them on their terms.

The campers love to put their creativity to work, make new friendships, and treat one another with kindness – not because we force them to, but because human beings will often find harmony with themselves and one another when given the space to do so.

And the learning? The learning is amazing. Sure, the kids learn “skills” like archery and canoeing, but what they’re really learning is how to use their own freedom wisely. They learn to interact with people that they love, and don’t like so much. They learn what happens when you stay up “too late,” or choose to hang out with friends instead of do the programmed camp activities, or what happens when you stick your neck out for a friend. All of this without being forced to say sorry after conflicts, or to go swimming “just to see if you like it,” or any of the other power-over approaches we were taught in college.

It’s not always perfect, but it’s always real. We figure that real experiences will do a much better job of preparing kids for their future than we can, even when we have the best of intentions. When the kids wake up someday with no one to tell them what to do, we’re content knowing that they’ll have a lot more experience with that kind of freedom than we did, and we are confident that that experience will be helpful.

As for our own family, we’re now up to three kids who direct their own learning. Some days that looks like Minecraft and Plants vs Zombies, and some days it looks like going to the Farmer’s Market to meet up with friends. Other days we travel the neighborhood LARPing, and others we watch YouTube. They decide what’s important to them, and we help nurture the skills that they are looking to develop.

Our oldest son is a budding mathematician thanks to his desire to be better at games and his natural curiosity about how things work. Our middle son, Ezra, is a story-teller, inspired by both the stories he hears from books and videos and the open ended time he needs to explore the worlds he creates in his own mind. And they are both so much more than both of these things, of course.

Our youngest son, August, is six months old – the same age that Oliver was when we first started down this journey. It’s amazing to think how much joy has come into our lives in the six years that we discovered self-directed learning. As we watch August crawl around and begin to explore the world on his terms, we marvel at how freeing it is to let him write his own story. He’ll navigate the uncertain waters of childhood and adolescence without the additional pressure of trying to live up to the expectations of parents or teachers who try to steer him toward learning things that are “more useful” or “more valuable.” It feels like the best gift we’re capable of giving him.

Letting kids cultivate and follow their own inner voices still isn’t always easy, but I suspect that’s because I’d lived so long without seeing it in action. After six short years though, I can’t imagine any other way.

I remember the attitude of general suspicion that adults had toward children in camps and schools I’d worked in the past, and discarding that in favor of trust and acceptance has been a breath of fresh air.

Our kids still make mistakes, but we help them work through their mistakes without shame.

Our kids sometimes have regrets, but they don’t resent us for causing them to miss out on the things that are important to them.

Our kids sometimes get angry, but it’s usually comes from frustrating moments while doing things are important to them, rather than getting angry because we are a barrier between them and their goals.

When talking about new ideas, it’s easy to want to offer disclaimers. I’ve spoken about self-directed learning as it pertains to both camping and parenting, and have occasionally felt self-conscious about being too absolute. While I run the risk of that here, I’ll say this – six years, thousands of campers, and three children later, I believe that every parent and educator owes it to themselves to open the door for more self-directed learning. My guess is that you’ll find the same beauty I have.