A recent New York Times piece by David Leonhardt reports on the research of Raj Chetty which shows that the odds of a child earning a greater real money income than his or her parents has declined from 92 percent for children born into the average American household in 1940 to 50 percent for those born in 1980. The implication is that the “American dream” of doing better than our parents is dying and the policy prescription is, of course, that we must reduce the inequality that is causing this problem through the usual progressive wish list of government interventions.

Even if you make less than your parents, would you go back in time to the world they lived in at your current age even with their higher real money income? Let’s step back, though, and ask if the data Chetty presents really make the case they appear to. That is, even if it’s true that children are less likely to earn higher inflation-adjusted incomes than their parents, does that make them “worse off” in any deep sense? More specifically, is real money income the best indicator of one’s standard of living and therefore the best way to make these sorts of intergenerational comparisons?

What is meant by the “American dream?” Leonhardt implies that the dream is to earn more than our parents did. But another version of the dream is that everyone has an opportunity to work their way up the income ladder. Economists talk about this in terms of “income mobility,” or how easy or hard it is for people to move from one place in the income distribution to another (either up or down) in a later year.

We also distinguish intragenerational mobility from intergenerational mobility. The former refers to how easily households in one generation can move from year to year, where the latter refers to degree to which children end up in a higher or lower income range than their parents. The data on the first indicate that mobility is still alive and well, though slightly less than in the past.

Over pretty much any ten-year period since the 1970s, well over 50 percent of households in the lowest percent of the income distribution in one year had moved up at least one quintile by the end of the period. Some data sources indicate that over 80 percent of poor households were no longer poor a decade or so later.

With respect to intergenerational mobility, a 2007 study found that the children of the top 20 percent of income earners in 1969 had real incomes in 2000 that were roughly equal to what their parents had in 1969. At the other end, 82 percent of children of the bottom 20 percent in 1969 had incomes in 2000 that were higher than what their parents had in 1969. The median income in 2000 of those children of the poor of 1969 was double that of their parents. The differences between this study and Chetty’s may reflect differences in their data sources, but at least it suggests that taken on their own terms, Chetty’s results might not be the only way to parse the data.

Other Forms of Compensation

Even if our real money incomes are less likely to exceed that of our parents, what our incomes can buy us is far more than what our parents’ incomes could buy them.One other point to consider is that comparisons of money incomes ignore the question of non-monetary compensation, which has become a much greater portion of total income over the period Chetty is examining. As one example, just looking at money incomes ignores the value of employer-provided health insurance (as well as the value of employer contributions to retirement programs). A whole variety of studies have pointed out that once we look at total compensation, much of the decline in money wage growth rates since the 1970s disappears.

But even if Chetty is right on the data, his study does not address the question of what our real incomes can buy us. What ultimately matters for human well-being is what our real incomes enable us to consume. Consider the fact that even many of the poorest Americans are walking around with smartphones in their pockets that were not available at any price to the richest Americans of a generation ago. Consider the range of foods available at the typical grocery store in a middle class suburb, or even a rural town, and then compare it to the typical grocery store of the 1970s or 1940s.

Even if our real money incomes are less likely to exceed that of our parents, what our incomes can buy us is far more than what our parents’ incomes could buy them. From food to clothing to electronics to medicine to cars, most goods and services are cheaper and/or better than ever before in human history.

What Can We Buy?

We can see this process at work with a variety of consumer goods over the last 55 years: 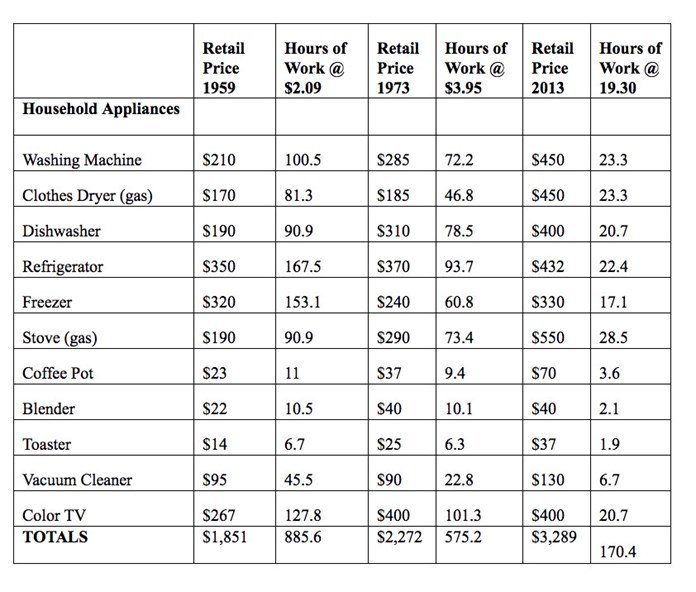 Other data make clear that these household items are increasingly available to poor Americans. In fact, Americans below the poverty line today are much more likely to have these sorts of things in their homes than was the average American family in the 1970s. And when we consider the higher quality of these goods and services, we are that much more well off than our parents were, whether rich or poor.

In 2013 this typical set of household appliances required less than 20 percent of the working hours than it did in 1959 and less than 30 percent of what it did in 1973. That we spend so many fewer of our working hours buying these items, not to mention food and clothing, is what makes it possible for us to afford smartphones, Uber rides, more widespread air conditioning, not to mention new medications and other health care.

It may well be less likely than in previous generations that children have real money incomes in excess of their parents, but that doesn’t mean they are necessarily materially worse off than their parents. Those born in 1980 have innovative new medicines and technologies, new production processes that have reduced the real cost of most goods and services, and breakthroughs that have improved the quality of many products as well.

Ask yourself this: even if you make less than your parents, would you go back in time to the world they lived in when they were your current age even with their higher real money income? My guess is no, and that’s the most powerful evidence that whatever your income, you perceive yourself as better off today than they were then.

Shades of Gray in the Russia-Ukraine War
Global Food Shortages: How Does Your Garden (or Pantry) Grow?
The Corruption of Money, a Key Source of The Corruption of The World
In Defense of Ideology
Lying to Congress Isn’t a Crime Because Their Laws Don’t Apply
A Taxing Day
Reflections on the Ukrainian Refugees
BLM Versus Collective Guilt
War is the Crime; Its Perpetrators Seldom Face Justice
Musk May Help End Liberal Narrative