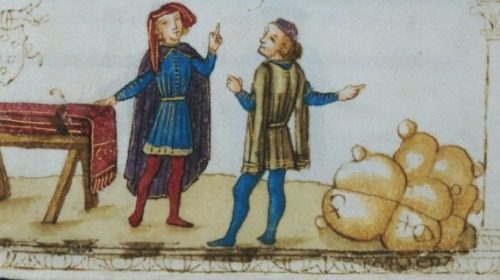 I think we market anarchists make our lives difficult when we try to convince people that statelessness will “work” with a thought experiment in which we start from scratch using examples that might have been relevant to primitive humans, but can be difficult to relate to in the modern age. Yes, you can make a point with using an example of a small number of people interacting in an isolated system, but you could just as easily create a thought experiment starting from our current situation that people might find easier to follow. Such a thought experiment might look something like this.

1) Suppose we peacefully disassembled the federal government. Unless you believe that one world government is necessary, then you’ve already accepted the premise that states can be subdivided without major problems. The states could provide for defense through contracts with each other (they already do this for emergency response). No abstract concepts or major jumps of logic so far. Whether this is a good strategy is beside the point. This is a thought experiment.

2) Now relax the travel requirements usually associated with state borders (presumably through contracts between the states). Suppose you can easily travel to or live in Arizona while remaining a citizen of Colorado and largely subject to Colorado’s laws. Colorado and Arizona governments would probably either have an agreement about jurisdiction or would abide by a prevailing convention. This isn’t too hard to visualize because it’s already the case both in the US and with those living outside of their home countries. It’s also the case with many businesses that incorporate in Delaware but operate in many other states. There’s also an analogy to be made with religion. In this scenario, the individual would be largely subject to the law of wherever they are citizens, rather than only those of the region in which they reside. This requires a little imagination, but not too much.

3) If you get to step 2, you probably realize that borders don’t serve as much of a purpose anymore, especially for certain aspects of law. In principle, people could subscribe to any state’s laws and live anywhere so the states are essentially competing for members and are not significantly different from businesses. The states that provide better and more widely accepted laws, better security solutions, etc. at lower cost will win out in the market. “States” (not really an appropriate name anymore) will reconfigure themselves to add value to their shareholders just as corporations do now and market forces will do their thing. I might subscribe to one state’s laws for one thing and another state’s laws for another thing and as long as both of those sets of laws were recognized by whatever state I was living in, there likely wouldn’t be any problems with it. 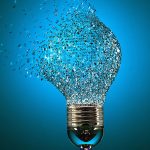 I was recently asked whether I thought intellectual property (IP) encourages or inhibits innovation. I believe the latter for several reasons, but first, let’s cover some background.

I won’t address the philosophical bases for IP that have been offered except to say that as far as I’m concerned, there are no sound philosophical, rights-based foundations for IP. Many thinkers including Stephan Kinsella, Sheldon Richman, Kevin Carson, and dozens of others have decimated every philosophical justification that has been offered for IP.

Taking a more consequentialist angle, IP laws, specifically patent laws in this context, have the net effect of discouraging  innovation and technological advancement for (at least) three reasons:

Innovation exists on a spectrum from marginal to disruptive. Because marginal innovations are often not patentable, the incentives provided by patent protection encourage a “societal innovation portfolio” that emphasizes disruptive innovation more than it would absent the incentive. One could make the argument that a society benefits more from a focus on disruptive innovation, but I believe that the only practical way to actually determine the optimal innovation portfolio to benefit society is to allow market forces to do their thing as free as possible from arbitrary distortions of incentives.

Once a potentially disruptive innovation is made and patented, others are prevented from making marginal improvements on the technology without making licensing payments to the innovator. Surely more innovation would occur if people were free to fork technologies in the same way you can fork a repo on github. A counterargument might be that the disruptive innovation might never have occurred in the first place, but I think it’s highly unlikely that humans will stop pursuing disruptive innovations simply because they’re not granted a monopoly by the state. I think it’s probable that in the absence of IP, disruptive innovations would tend to be undertaken less by garage tinkerers and more by established businesses that would be better equipped to evaluate their potential and commercialize them.

3 – They cause resources to be diverted into enforcement and litigation that add little to no value to the consumer.

Patent litigation is expensive and so are business strategies that rely heavily on it. If there’s a potential state-granted monopoly on the line, such expenses may be worth it, but in the absence of such opportunities for monopoly, I think those resources would tend to be used in pursuit of other competitive advantages, including more research and development.

For a much more thorough consequentialist case against IP, take a look at Boldrin and Levine’s Against Intellectual Monopoly. 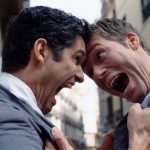 One of the first things people realize upon becoming acquainted with libertarianism is how much libertarians fight amongst themselves about questions that seem highly esoteric and about which very few normal people would care. Esoteric though they may be, understanding these questions is central to understanding why we libertarians believe what we do. Many of these debates are decades or centuries old and no simple chart could hope to capture the nuance in the arguments. To make it even more confusing, it’s often the case that libertarians come to very similar conclusions through completely different thought processes.

That being said, one of the best ways I’ve thought of to sort libertarians is by their answers to 2 questions, with the answers to each question generally falling into two camps. The two questions are:

A) A rigorous and consistent application of the non-aggression principle (NAP), usually in the context of Lockean or neo-Lockean property norms. The NAP has been stated in many ways, but it usually goes something like this:

B) The latest name for the centuries-long struggle for freedom which should be understood in its proper historical context. These libertarians may or may not care all that much about the NAP.

Although these two conceptions of libertarianism aren’t mutually exclusive, one or the other is usually more important to any given libertarian. I call the former group Brutalists, referring to the architectural style that emphasizes simplicity and function over beauty and elegance (the term brutalist is not derogatory and does not imply that those people are “brutes” or brutal in any way ). I refer to those in the latter group as Humanitarians because they, like their ideological forbears, tend to emphasize the humanitarian values that can be better achieved by free people serving each other in markets than by government force.

As many readers will undoubtedly recognize, the Humanitarianism / Brutalism distinction is drawn from a controversial article by Jeffrey Tucker entitled Against Libertarian Brutalism. I think Tucker’s analysis is insightful but incomplete because he lumps too many disparate views of libertarianism into his brutalism category (which is probably why his article was so controversial). I hope that this article can at least partially remedy this.

Why do you support it?

A) a sense of morality or justice

B) consequentialist arguments about what is most likely to result in less conflict, more prosperity, etc. for a society.

I label the former category Moralists and the latter Consequentialists. I’m fully aware that these distinctions can be messy, but I still think they’re useful. The former category consists of moral realists, primarily of the deontological variety. The latter consists of moral realists espousing consequentialist ethics, moral subjectivists, moral nihilists, etc. Unsurprisingly, the latter group is more likely to be persuaded by economic arguments than by appeals to morality.

Since libertarians have an affinity for finding their ideological views on charts, here’s one for the breakdown I just described. I’ve given a name to each quadrant (none of the names are meant to be derogatory, if you’ve got a better label than NAPertarian, let me know in the comments). 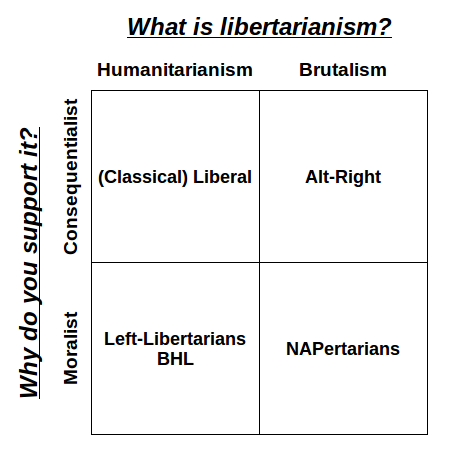 So now we’ve got four kinds of libertarians.

Before I get a bunch of Trumpkins and alt-righters having aneurysms in the comment section, I’m not describing or attacking your movement here (maybe a post for another day). I’m only describing how I see it fitting (or not fitting) within the spectrum of contemporary libertarian thought. If a consequentialist-brutalist seems like a bit of a contradiction, that’s because it kinda is, which is partly why I don’t really consider alt-righters libertarians. When they do claim to be libertarians, they typically endorse a very limited and ideologically tolerant version of what libertarianism is (brutalism) because it can technically be construed as compatible with their particular consequentialist worldview. But as the chart shows, theirs is the only quadrant that tends to reject both moral arguments and humanitarian values. It’s no wonder a lot of libertarians have a hard time seeing the alt-right as part of our movement.

What About the Minarchists?

The statism vs. anarchism divide is the one everyone wants to talk about, but I don’t think it’s actually that important of a divide. Very few stay minarchists their whole lives and even if they do, who cares. Some people just can’t get comfortable with what a totally stateless society might look like, but otherwise want to be as free as possible. I’d say that quite a few minarchists tend to fall in the classical liberal quadrant, although many of them, upon becoming anarchists, seem to move quickly down to the NAPertarian camp, at least initially.

Personally, I started out several years ago fully in the NAPertarian corner and I’ve gradually zig-zagged my way to the opposite corner as a consequentialist/humanitarian (liberal).