“Love Perspective” is an original column appearing every other Thursday at Everything-Voluntary.com, by Serenity. Serenity is the mother of 4 boys and both a recovering mainstream parent and statist. She seeks to share what she has learned along her journey to voluntaryism, radical unschooling, and living a counter-culture lifestyle. Archived columns can be found here. LP-only RSS feed available here.

I read an article this morning by Dr. Laura Markham, and a quote near the beginning really struck a chord with me,

“Do you even have children?!!! Obviously not, or you would know this kind of parenting is impossible, and would raise criminals!”

I have been accused of not having children by faceless people on the internet who genuinely and truly disbelieve my assertion that children do not need to be hit or even punished in order to be loving, kind, empathetic, worthwhile people. And I cannot even begin to count the number of times I’ve seen meme pictures making the rounds which proclaim the problem with today’s spoiled rotten-ungrateful-worthless punk-lazy-video-game-addicted-children is that they have not been punished by a belt or wooden spoon or paddle or [insert weaponry of choice here]. For example: 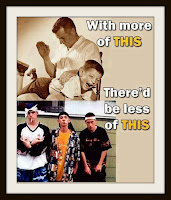 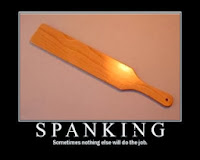 Sadly, I once believed that, too. My first son was a super compliant child who was very fearful from an early age; it just seemed to be in his nature to be compliant. I still remember the first time I smacked his bare bottom, though. I was trying to get out the door for work and was, of course (due to my own poor time management), running late. I needed to change his diaper, and he was fighting me tooth and nail. By that stage, I’d worked out a way to sit spread-eagled on the floor and pin his hands down under my calves and his feet under my thighs to reduce the squirming and fighting which accompanied each diaper change. However, he managed to escape my restraints and stood to make a getaway. I pulled him back and without even thinking, raised my hand back and smacked his bare bottom. The shock on his face was a horrifying moment for me, and then he, of course, proceeded to cry from the stinging pain. I laid him back down and finished the diaper change with tears in my eyes as I noted the raised red whelp on his sweet little baby bottom. He was only 13 months old.

I wish I could say that was the last time I ever struck one of my children, but it wasn’t. It was the first time I ever understood, “This is going to hurt me more than it hurts you.” I really did believe physical punishment was the last resort when every other effort to control, manipulate, bribe, and coerce my children into compliance failed.

Son #2 is a strong-willed child with strong negotiation skills. I daresay his verbal maneuvers would give F. Lee Bailey a run for his money in any courtroom. He is not compliant – ever – unless he can see how it benefits him. My stepson, who is only 7 months younger, never learned his lesson on anything – what he did yesterday, he would repeat again tomorrow and beyond. Around age 2, the boys started getting routine time outs, nose in the corner, loss of toys, etc. When those didn’t work, we upped the ante to spankings. When one spanking didn’t work, we went to two. When two didn’t work, we went to three. When three didn’t work, we dropped his drawers and went bare bottom. When that didn’t work, we created a paddle very reminiscent of the ones my parents and teachers had had when I was a child.

Unfortunately, no amount of physical pain could deter my boys from “misbehaving.” No loss of field trips or visits to Grammy’s house or loss of toys changed their behavior. And that is what finally made me realize the futility. I had completely run out of ways to effectively parent them, primarily because the only way I knew to parent them was the way I had been parented; the way my teachers and elders had treated children, and the way mainstream society encouraged. All I knew was making them suffer for every mistake, for making them hurt for every wrong choice with the hope that they would somehow stop and think the next time they were making a “bad” decision.

I’m now working double overtime trying to correct those years. As the expression goes, “When the only tool in your toolbox is a hammer, every problem looks like a nail.” I’ve finally added more tools to my parenting toolbox, and I can now view “problems” in a different light. I am also reaping the fruit of those years as I have an appointment next week to discuss son #2’s probation on two different episodes where he acted violently toward others.

I was fortunate enough to get another chance to parent in a different way with the birth of son #4. This child has never been spanked. He is the most considerate, loving, gracious child I have ever known – and I know it has to do with those traits being what we have shown him. He is unconditionally loved and respected. He is full of compassion and has amazing humor and confidence.

So before you say, “I was whipped as a kid, and I made sure I never did that again!” think long and hard about it. You were hit and put into a state of terror and fear by those you loved and trusted most in this world. You were only behaving out of fear of repercussions, not because you knew a bad choice could cause someone pain or suffering. Imagine if you had been treated with real respect – respect earned by being shown respect. Imagine if you knew your parents would never strike you or allow anyone else to because they would talk with you like an intelligent being and help you work through your challenges and strong emotions.

I’m living proof that change is possible. It is not easy, and it does not happen overnight. But it is possible, and it is one of the most worthwhile causes I have ever undertaken. You can leave a better legacy for future generations by doing better today.

“You were only behaving out of fear of repercussions, not because you knew a bad choice could cause someone pain or suffering.” Isn’t that why we all behave? We are, at our center, still animals. Intelligent animals, but animals nonetheless. A cat doesn’t fight a bear because the cat thinks it’ll hurt the bears feelings; the cat is smart enough to know that will probably be the last bad decision it ever makes. Most people aren’t car thieves because they think the owner of the dealership will get upset; they don’t wanna go to prison for stealing that nice-looking Corvette.… Read more »

Don’t Make Enemies over Politics
Swapping Politicians Pointless Change
Capital Punishment Places Too Much Trust In An Untrustworthy Institution
Promises of Politicians Impossible
Note to SCOTUS: Section 230 is an Acknowledgement of Reality, Not a “Liability Shield”
Please Don’t Go
Acrostic on Excerpt about Time
Contra Hobbes: Peace and Political Government are Opposites
Who Does Protectionism Protect? Not You
How the State Violated Free Speech during the Pandemic