It may be apocryphal, but the origin of the game is said to have originated with the defeat of Henry III in 1264 by Simon de Montfort at the Battle of Lewes. After his defeat, Henry could give no commands save on Simon’s authority.

When we are children, this may make sense. Adults are older, more experienced, more aware of dangers that could hurt us, better informed on nutrition and so on. Their authority serves to keep us alive and well.

But some influential experts in child psychology have recommended that even children should be treated as autonomous beings with minds of their own. The child psychologist Haim Ginott, in his ground-breaking book Between Parent and Child, offered “specific advice derived from basic communication principles that will guide parents in living with children in mutual respect and dignity.”

While acknowledging that parents need to set limits, communicating such limits requires respect for the child’s feelings, a focus on behaviours rather than the child’s character, and a fostering of independent decision making.

As we mature, we become more independent, eventually making our way in the world. This involves rejecting authority to some extent. For some, this independence breeds an hostility to authority well captured in a slogan popularized in posters in the radical sixties – Question Authority.

Benjamin Franklin said, “It is the first responsibility of every citizen to question authority.”

Theodore Roosevelt (after he left the presidency, of course) said, “To announce that there must be no criticism of the President, or that we are to stand by the President, right or wrong, is not only unpatriotic and servile, but is morally treasonable to the American public”.

Albert Einstein said, “Unthinking respect for authority is the greatest enemy of truth.”

It makes sense to respect some authority. We are not omniscient. We cannot know everything, nor can we be experts in every field. We, of necessity, respect the authority of doctors, dentists, and other medical specialists. After my pulmonary embolism, my doctor put me on a blood thinning drug. I am not about to question his expertise, though I did read up on the disease and the drug. This is not a failure to question authority so much as an acknowledgement that he knows more about the ailment and its treatment than I do. He went to med school. I did not.

This acquiescence to authority is important in many areas of life. Take something as mundane as the automobile. We take our cars to be fixed by knowledgeable and respected mechanics because we cannot fix them ourselves. Most of us have only a vague notion of how a car works.

We rely on experts because we live in a society with a highly developed division of labor, with many people specializing in many things. We rely on the expertise of experts every day.

Yet even in these specialized fields, some questioning of authority is appropriate. There are alternative medicines such as naturopathy. There are those who question the efficacy of vaccines.

Most importantly, it is important to maintain our moral compass in the face of authority.

But while there must be a balance between questioning authority and acknowledging expertise, and while questioning of authority is built into the fabric of American life, there is also an undercurrent of unquestioning obedience.

In a famous experiment at Yale University in the sixties, psychologist Stanley Milgram set out to test how far people would stray from morality at the behest of authority.

Milgram was influenced by the Eichmann trial in Jerusalem. The architect of the Nazi’s final solution had been caught in Argentina by Mossad operatives and spirited away to Israel to stand trial. Political theorist Hannah Arendt covered the trial and wrote about it in her book Eichmann in Jerusalem.

“Arendt contended,” writes Milgram in his book Obedience to Authority, “that the prosecution’s effort to depict Eichmann as a sadistic monster was fundamentally wrong, that he came closer to being an uninspired bureaucrat who simply sat at his desk and did his job.” Arendt coined the phrase “the banality of evil” to characterize her observation.

Milgram goes on to note that the film, Dr. Strangelove, “brilliantly satirized the absorption of a bomber crew in the technical procedure of dropping nuclear weapons on a country.”

His experiment aimed to see if authority and the absorption of a test subject in an exacting routine could lead to the subject crossing moral boundaries.

The experiment had student volunteers participate in “a study of memory”. He paid volunteers $4 an hour, pretty good pay at the time. The actual experiment was conducted in a lab. On one side was a learner. He was strapped into a chair with an electrode  taped to his arm.

On the other side was a desk with an instrument panel consisting “of 30 lever switches set in a horizontal line. Each switch was clearly labeled with a voltage designation that ranged from 15 to 450 volts. The labels showed a 15-volt increment from one switch to the next.”

It all looked very official and the test subject was seated at the desk and told by the experimenter, authoritative looking in a gray lab coat, that the subject was to be the teacher in this experiment to test memory. The “teacher” was to read a series of word pairs, then he would read one word and the learner was to repeat what the correct matching word was. Sort of like the game Concentration.

If the learner got the answer wrong, the teacher was to administer a shock. The experimenter assured the teacher that “Although the shocks can be extremely painful, they cause no permanent tissue damage,”

At each wrong answer, the teacher was to increase the voltage by one step. As the shocks became increasingly larger, the learner’s reactions would change from a mild twitch to expressions of pain to screams of pain and even begging the teacher to stop. The learner was not actually being shocked, but a confederate of the experimenter, an actor who pretended to be in pain. But the subject teacher did not know this.

The cries of the learner confederate increased in stages. with little discomfort shown below 75 volts. But “painful groans were heard on administration of the 135-volt shock and at 150 volts the victim cried out, ‘Experimenter, get me out of here! I won’t be in this experiment any more! I refuse to go on!’ At 180 volts the victim cried out, ‘I can’t stand the pain,’ and by 270 volts his response to the shock was definitely an agonized scream.”

At 300 volts the learner refused to go on and the teacher was advised to treat non-compliance as a wrong answer and shock the victim anyway.

The tests were conducted in variations to test whether the proximity of the victim had any bearing. In Experiment 1, the victim was not visible nor audible, but “at 300 volts the laboratory walls resound as he pounds in protest. At 315 volts, no further answers appear and the pounding ceases.”

The results of this experiment boggle the imagination. Each experiment had 40 subjects. In experiment 1, no visibility, no sound except pounding at 300 volts – fully 26 people went all the way to the highest voltage – 450 volts. With experiment 2, no visibility but victim’s screams could be heard – 25 people went the limit. Experiment 3 – victim in same room visible and audible – 16 applied the maximum voltage. And in experiment 4, where the teacher had to physically force the victim to receive the shocks – twelve people – you read that right – twelve people – compelled the victim by physical force to receive the maximum shock.

Twelve people resisted the victim’s screams of pain and demands to be let free and forcibly held his hand on the shock plate. Twelve people obeyed an authority figure rather than their own conscience. Twelve Eichmanns in waiting. Milgram truly proved that Arendt was right. The most banal functionary can be a dictator in waiting. A person capable of carrying out monstrous acts at the behest of an authority figure. The table below shows the results of the experiment. 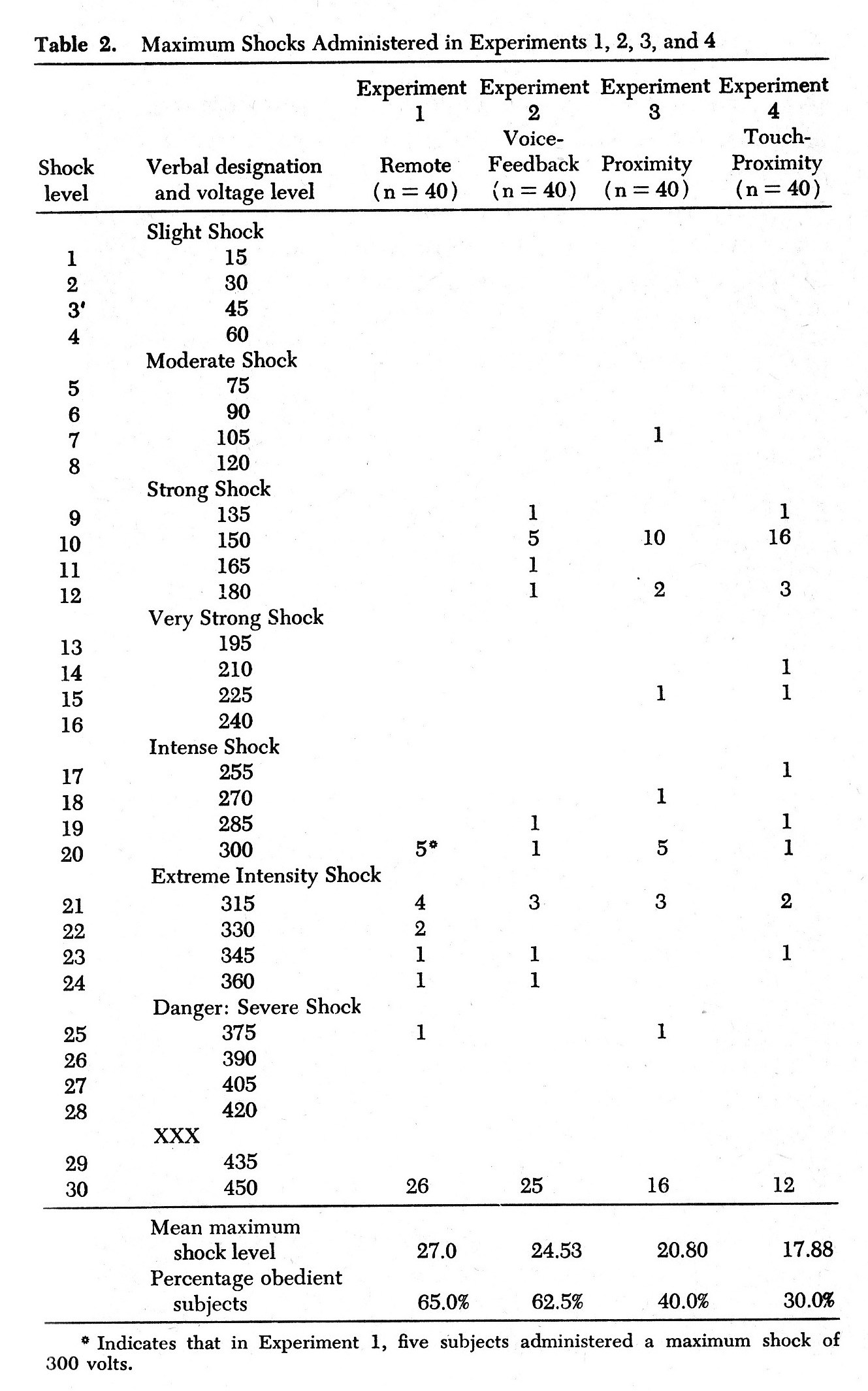 And lest my fellow smug Canadians believe that this is an American problem, that Milgram’s experiments happened in the United States, we in Canada are possibly even more prone to acquiesce to authority. In 1980, an American ex-patriate professor at Dalhousie University, Edgar Friedenberg, published Deference to Authority: The Case of Canada.

“Canada doesn’t want the American political system, doesn’t need it, and couldn’t make it work,” he says, “But life in Canada would be much freer, and political institutions more stable, if Canadians could get the message that is already grasped at some level by most Americans: that authority is, in every sense, inherently questionable.”

Politics is Cruelty
Youth Gun Safety: A Smart Parent’s Guide to Keeping Kids Safe
Elections: Is There Light at the End of the “Big Lie” Tunnel?
It’s Never Been More Important to Skip College
Is It Corruption?
Senseless Leftist Obstinacy (Vermont Style)
US’s Constitution Was a Mistake
Liberty > Life
COVID-19 and the End of Government Schooling’s Main Value Proposition
How Freedom Is Lost