I am discussing a fundamental of my world view in this column.  I am a voluntary follower of the philosophy of Daoism.  If I were to say, “I am a Daoist,” some would take that to mean that I practice a religion, but I specifically reject the idea of a Daoist religion for myself.  To be sure, there are religious Daoists, but I am not one of them, even when I practice, for instance, the ritual Tao Tai Chi.

In some future column, I hope to treat the freeing notion of distinguishing between philosophy and religion. I will discuss today’s topics with you, however, by examining the nature of the “Yin Yang,” and then how it may apply to practical choices of governance and the longing for a status quo. 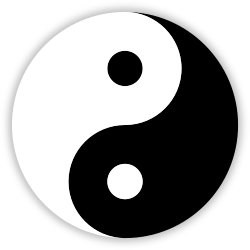 Could it be that the paradoxes of life are these Yins and Yangs of eternal self-reference?  But, of course.  I was told in no uncertain terms recently that there will always be government, and I found that pronouncement to be very discouraging — until I perceived that rules and voluntaryism were the components of government, which exist in perpetuity and define one another.  An individual volunteers for observance of the rules by which that individual will live.

Yes, but what about government mandated by law, and enforced through the threat of violence.  It is my view that, reduced to fundamentals, each of us chooses the environment of rules in which we live.

One of the interpretations of the Yin and Yang is the shady side and the lighted side of the hill.  That is the meaning of the symbol at the head of this segment.  No matter how you turn the hill, no matter how you manipulate the hill’s environment, half of it will be illuminated and half will be in shadow.  The same is true of compulsory government and voluntary government.  Furthermore, the same is true of government and freedom.  The saving grace is that I, as an individual can (in fact, must) choose how I will orient myself to the Yin and Yang of rules and freedom.  I decide that which I will accept and that which I will resist.  I decide when I will walk in shade and when I will walk in light.

It is self-evident that no number of men, by conspiring, and calling themselves a government, can acquire any rights whatever over other men, or other men’s property, which they had not before, as individuals.

The word state, in its origin, means fixation.  So state is the Yin or Yang of change.  Lysander Spooner tells us above that we cannot fashion a third condition, which is new, out of the old.  If you or I have no domain over another man, we cannot create that domain by agreeing that we have that domain.  In the world of natural law, a thing either exists or it doesn’t — it cannot be made existent by agreement.  Agreements must be composed of a recognition of that which is doable versus that which is impossible.  In natural law, for an example, one can have pain defined by a variable amount of ease, and one can have ease defined by a variable amount of pain — you cannot fictionalize through agreement with another a third state which has neither pain nor ease.  You can agree, however, with yourself or among others, how much dominion the pain/ease condition will bear on all other matters.  But that agreement can only apply to its adherents, not by reference to parties outside the agreement.

Many a person has uttered the useless phrase, “but that is how we have always done it.”  Now, I will admit that the thought process may be useful when it aids a decision to let a sleeping dog lie, but it cannot be constructive evidence for continuing a wrong or even an obsolete good.  The present is independent of the past in terms of volition, that is to say how we exist and go forward.  The past is education about what is likely to happen, about direction, and about speed.

Almost any political debate rests on lavish use of this fallacy*.  You may argue for term limits or the converse unlimited terms, for instance.  But either position is one wanting to make one thing or the other static.  And either position is an attempt to create a third, unrealized state — good government, with the absence of bad government.  Either position is based on an illusion that people will behave in predictable ways, once nailed down.  Either side see the status quo, either an old one or a new one to be a self-evidently good state because it is or will be.  Is too!  Is not!  Will too!  Won’t!

The life of a voluntaryist is one on the cusp of the Yin and Yang.  By this logic, we are all voluntaryists determining where on the cusp line of volition and obedience we are.  This realization itself is a freeing notion.  The nature of the Yin and Yang is within one’s self, under the self’s domain.  We cannot delegate fictional agreements to others, as we must accept them or deny them.  And we cannot derive facts from previous facts, we can only judge probabilities. Read more from “Finding the Challenges”:

Neighborhood Auto Shops Can Make a Lot of Money
“Privacy”: Some Animals Are More Equal Than Others
Liberty is The Only Reason You Need to Own Firearms
Your Flight Is Delayed; Thank the Feds
Destroy What You Know
Can Elon Musk Save Twitter?
Seats of State
Alito’s Challenge to Libertarians
Leftists Are Toxic Lunatics
Glenn Loury’s Collectivist Immigration Policy