Stockholm syndrome is a psychological condition of traumatic bonding in which a victim comes to empathize with an abuser so much that they will identify with and defend them. It is evident in many who consider themselves compassionate and patriotic, as evidenced by the following statist hogwash. Here it is in all of its president-worshiping red, white, and blue glory: 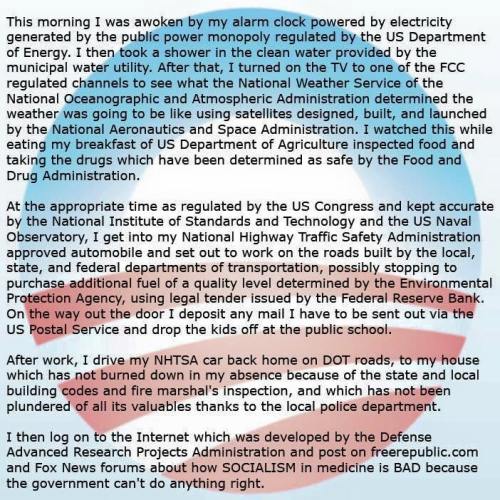 There are several false assumptions and logical fallacies at work there, so rather than address them one by one, I decided to just write a better version:

This morning I was awoken by my battery-powered cellular phone made by capitalists overseas, which was available at a very reasonable price even though government threatened both the manufacturer and me with violence if we both didn’t pay taxes to trade for it. The government threatens me with violence if I try to collect the rainwater on my own property, so I took the safe route and paid whatever the government monopoly charges for the rainwater they appropriated from me and my neighbors so I could take a shower in the home I’m told I own, but will be violently taken from me if I don’t pay property taxes to government, who considers itself the real owner.

As I looked out my window, I thought about how nice it is of private airline companies and private observation stations to provide data and observations to the National Weather Service. If all you want is distributions of that data, you can rely on the NWS. Alternatively, you can enjoy the free, private weather channel app on your phone or you can enjoy the privately engineered graphics used in various television broadcasts. If you really want to be serious (like aircraft companies do), you can insist on data and forecasting from private sources, as it is more accurate and comes with customized, rigorous, statistical probability analysis that takes into account micro-climate considerations absent from the simple data distributed by the NWS. While I was disappointed to see the NASA couldn’t manage to stay within their astronomical budget and filed for bankruptcy, I was encouraged to see that private companies like SpaceX are competing to provide better services to me and my neighbors without stealing our money.

For taste and medical reasons, I prefer to pour raw milk on my breakfast cereal, but the government won’t let my neighbors sell it to me. I don’t have time or energy to fight that battle myself, so I decide to just work around it, along with similar hassles like life-saving drugs that are withheld from the market, the approval of dangerous drugs, forced vaccination, subservience to big pharma and Monsanto, prohibition, corn and sugar subsidies, protectionist tariffs and embargos, and the general ongoing war to deny freedom of choice for things like soda cups larger than 20 ounces and food containing trans fats.

I was coerced to disclose and register the details of the private purchase of my car and pay taxes on it whether I drive it or not. But it’s nice to have a car to get to work, since the government train system in my city is far too expensive and inconvenient, despite being funded with money stolen from people whether they ride it or not. I get pulled over by a policeman on a motorcycle who says he’s giving me a ticket for not wearing my seatbelt as a government school bus with no seatbelts passes by filled with children. I’m glad there are private construction companies who specialize in building flat surfaces to drive on, but I’m stumped trying to think of a reason why the politicians should take credit for building the roads, when they simply take money from the drivers and give it to the construction companies who supported their election campaign.

The car I really want is a Tesla, but the government won’t let them sell cars in my state, even though their cars are virtually silent, have zero emissions, and perform better than most racecars. So, I fill my current gasoline car with fuel from a business I trust. I would rather not use increasingly worthless debt notes from a privately owned bank with the ironic and misleading name Federal Reserve, but if my neighbors and I try to use something of real value instead (like gold), the government will just steal it all with some kind of official order and require payment of taxes in inflated fiat currency instead.

On my way to work, I stop by the FedEx store to ship a package to a friend because in addition to offering a lower level of service, the US Postal Service is bankrupt despite their ability to rely on tax money to fund operations. Somehow I manage to get to work on time while relying on clock technology developed centuries ago before the US government even existed.

I’m also forced to fund the harmful prisons euphemistically referred to as “public schools”, but I am glad that we can afford to teach our children at home, even though it requires significant additional sacrifice.

I was glad to find that my house had not burned down or been robbed in my absence. I don’t believe in fairy tales about magical protection of the approval of absent, disinterested officials who demand I obtain permits to build on my own property, but I do have an insurance policy with a private company to protect me from loss in such cases.

While at home, I pay a private company to enjoy access to the multiplicity of privately owned computers connected together for mutual benefit called the internet. While the men who envisioned the packet-switching and routing technologies that made it possible were hired by the government using stolen money to implement them for government purposes only, people eventually built their own computer network service companies and helped people connect their home computers to their growing series of networks that created and followed the same protocols for mutual interoperability.

I choose to purchase catastrophic health insurance with a reasonable deductible for health emergencies, but I can see why some may choose a different kind of arrangement. Some people say Americans cannot afford to pay for medical care, but they seem confident that we can pay for it all in addition to more government bureaucracy to administer it. I find that dubious, given the fact that the government not only spends more than it steals from citizens, but it has sold current and future generations into debt slavery for the many trillions of dollars it has in debt and unfunded liabilities it accumulates while funding multiple unjust wars of aggression and claiming the right to send our children to fight and die against their will.

I don’t rely on media puppets to tell me what to think, and I consider it reasonable to suspect increased government intrusion into our lives would be problematic.