“Win-Win World” is an original column appearing sporadically on Thursdays at Everything-Voluntary.com, by Russell L. Roth. Russell is a 30-year marketing veteran and graduate of Jay Snelson’s “Science of Human Interaction” course (he calls it “Win/Win 101”). He has owned and operated businesses in advertising, real estate and internet marketing. He holds a degree in Studio Art from the State University of New York and is seeking a music publisher for his portfolio of original Country/Folk fusion songs. A native of Central New York state, Russell currently resides in southern California with his wife, Valerie. Archived columns can be found here. WWW-only RSS feed available here.

When my kid brother told me he decided to be a libertarian some years ago it made me proud. Even though he was incapable of addressing the logical dilemma, “if a little government is better than a lot, why isn’t no government best of all?”, it was good to hear him espouse libertarian values.

Like many others of that ilk, my brother Harry (not his real name) still clung to the notion of a rudimentary government: police force, military and courts… yada, yada. This I considered workable, as all that was needed for a complete and positive transformation was the realization that ALL government is coercive by its very nature. Reducing it to a shell of its former self does nothing to change this basic fact. This is a big step, yes, but it was all that stood in his way.

What worried me more was Harry’s apparently visceral aversion to Objectivism. He attempted to poke holes in her reasoning at every turn, either unable or unwilling to grasp that Rand believed the same thing that he did; that even she could not bring herself to urge the abolition of the entire state. In any event, as I said, it was good to hear him speak in libertarian terms. His rehabilitation had taken a critical first step.

We lost touch soon after, being adults living 2,500 miles apart, with different families and commitments. Several years passed. Then recently, through the somewhat dubious miracle of social networking, we found one another once again. Harry’s thinking had taken an ominous turn. Now he was railing against “the plutocracy”, as he saw it. Worse yet, he posted that he could not understand all the “bad press” surrounding the term “financial redistribution.” Of course I made a heroic attempt to explain, as one would to a child, that redistribution of wealth was evil because it involved forcibly taking property from those who earned it and giving it to those who hadn’t. (I use sarcasm here because it continues to shock me that so many of us do not comprehend this seemingly simple point.)

We bantered back and forth for several days. On his page Harry continued to grouse about the widening gap between the rich and the poor, and the 1% of the population that seemed to have gotten all the breaks. He continued to insist that the state is all that stands between the abused poor and the ruthless robber barons whose goal in life is to extort and cheat them out of every penny and labor-minute possible. Yes, he actually used the term “robber baron”.

He did still agree that politicians are a big part of the problem. He saw them as corrupt (which they are, but not for the reasons he was thinking) and in cahoots with the corporations and “big money”. Yet he failed to offer any explanation as to how this condition serves the state in its stand on behalf of the abused poor.

Then one day Harry posted the following content on his personal networking page. 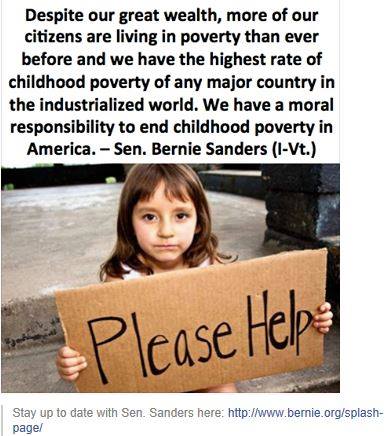 I know what you’re thinking. I should have stood back and let him continue to steep in this stupidity; that nothing I could say could change his mind or help him, at least, think more rationally.

But I couldn’t let this go unchallenged. Once again a politician was trying to fan the flames of resentment amongst groups of the citizenry in order to justify higher taxes. What made it worse was that Sanders is obviously quoting from one or more studies but the posting doesn’t say which studies, so it’s much more difficult to check it out independently. Secondly, every time I hear a politician use the term “moral”, or a variant thereof, I want to run like hell in the opposite direction. For I know the term “sacrifice” isn’t far behind.

So on Harry’s post I asked, “According to what reputable study?” (See below for my subsequent posting in response to this particular issue.)

Harry’s reply? Rather than quoting the source and methodology of the study, which any thinking person interested in the truth would have done, my brother unleashed a volley of invective targeting me and Objectivism in general. I won’t amuse you or embarrass him with direct quotes, but let’s just say he accused me of being a “tool” for the top one percent of the income earning population and stated that no one was interested in hearing my views. Although he obviously seemed to feel the exact opposite about the perceived relevance of his own perspectives.

I confess, I believe in fighting fire with fire regardless of the opponent. So I responded by pointing out that if I were an Objectivist tool he was just as equally a socialist tool. I dismissed his beliefs as hate-the-rich and simplistic. In conclusion I assured him that every time he rendered his unsolicited opinion I would respond with my own point of view and if he didn’t like it he was free to unfriend me. Our elder brother who, it turned out, was monitoring our exchange, chimed in with, “Does the phrase ‘useful idiot’ mean anything to you?”

Never let it be said that the Roth boys pull their punches when it comes to expressing their ideological views.

Well, as you likely guess, my little bro took my advice and unfriended not just yours truly, but our eldest sibling as well.

Such is what almost inevitably transpires when illogic is challenged by uncomfortable fact. Those without a rational leg to stand on sooner or later invariably initiate name calling, ridicule and finally, avoidance. They get downright nasty when presented with inconvenient truths, like a cornered raccoon. Then when this fails to intimidate, they run and hide. This is one manifestation of the phenomenon that Jay Snelson referred to as “intellectual immunity”. Most people don’t like their premises challenged.

Whatever one wishes to call it, there is only one viable response to those afflicted with this malady. As Rand said, one must treat people as they deserve to be treated, and let the chips fall where they may.

I bear no ill-will toward my socialist tool of a brother. I simply have no respect for his view that the rich are the enemy, particularly since he failed miserably at defending his view with facts and rational discourse when he had the opportunity. However, the sadness of the situation is not lost on me. If I have lost a brother, so be it. I can do nothing about it except hope against hope that one day he will eschew raw emotion in favor of rational thought. Until then, I’ll be online and available to answer any questions or concerns he may have about free market anarchy – if any.

Not content with simply trading philosophical jabs with my brother, I subsequently did the research he himself should have done prior to posting the above Bernie Sanders quote. Here is my response posting in its entirety.

JUST HOW POOR ARE THE POOR IN THE US?

Many international poverty studies have found that the USA suffers from dramatically high child poverty rates – nearly the worst – among developed nations.

Before you reach for your checkbook or call your Congressman, there are some things you should know.

For example, developed countries commonly use relative measures of poverty that categorize any household below a certain percentage of the national average income as impoverished — regardless of their standard of living. Others define poverty using specific quality of life indicators, but the set of indicators could be arbitrary, and the data gathered by household surveys to determine the extent of poverty could be unreliable. Thus, claims that child poverty is more pervasive in the United States than in other developed countries are at least suspect.

The highly reputed National Center for Policy Analysis issued a study of various methods used (use the link below to see the study), and made the following conclusions.

Using a relative measure can place children in a high poverty group in a particular country. But that country could have a high overall standard of living, like the USA… meaning that the “poor” in the US are actually richer than the “poor” in, say, France or Denmark.

In fact, the study states, of the officially-defined “poor” households in the US,

So the next time someone tries to tell you we have the highest rate of childhood poverty of any major country in the industrialized world, have them tell you which study they’re quoting, and explain the study’s methodology. If they can’t, or won’t, ask them to shut up.

In addition, check out the Cato Institute for reputable studies and articles that explode the liberalist myth concerning the USA’s top 1% income earners.

Russell is a 30-year marketing veteran and graduate of Jay Snelson’s “Science of Human Interaction” course (he calls it “Win/Win 101”). He has owned and operated businesses in advertising, real estate and internet marketing. He holds a degree in Studio Art from the State University of New York and is seeking a music publisher for his portfolio of original Country/Folk fusion songs. A native of Central New York state, Russell currently resides in southern California with his wife, Valerie.