It may seem strange to devote an entire article to one little “Tweet” from “God Emperor Trump” (a.k.a. the Orange Fuhrer), but one in particular is definitely worthy of a little psychoanalysis—a fitting term here, since we will be analyzing a psycho. 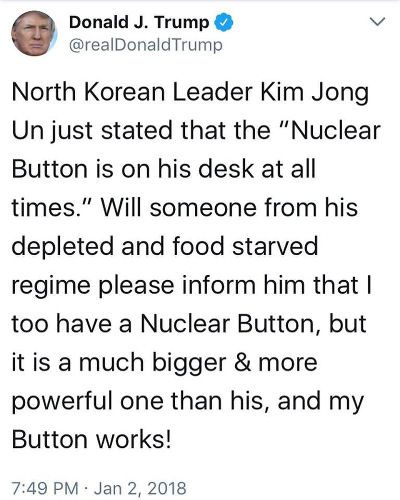 There are several separate issues, factual and philosophical, worth addressing here.

To state the obvious, high level political parasites around the world have easier and more effective ways to communicate than Twitter. The purpose of this “tweet” was to boast and bluster to the American people. That means that Trump thought the American people would be impressed by this. “Oh, he’s so bold and daring! Our hero!” And, sadly, a number of Americans do seem just dense enough to support such lunacy. But did Trump really imagine that Americans in general would be impressed by he and his North Korean counterpart acting like bratty eight-year-old boys on a playground?

Again, this shouldn’t really need explaining, but given how thoroughly many Americans have been trained by war-mongers to cheer for death and destruction, it’s worth a few words. What is obviously implied in Trump’s snarky (and insane) little “Tweet” is this: “I have the ability to effortlessly exterminate tens of millions of people in your country.”

Of course, I can hear the Trumpites now: “He was just responding to a threat with a threat of his own!” In fact, I’ve seen several people say exactly that. And again, statist indoctrination has probably warped enough minds that a lot of Americans would see it that way.

The rational and moral response to violence, or threats of violence, is the use of defensive force against the actual aggressor(s), not against anyone and everyone who happens to share the same religion, nationality, or general geographic location as the aggressor(s).

3 – Trump is the mirror image of Kim Jong Un.

Like many political “leaders” (a ridiculous euphemism for power-happy sociopaths), these two jokers need to feel needed, which requires an enemy for them to pretend to valiantly fight against. They both need either a war, or at least the fear of a war, to keep their respective subjects terrified and obedient, and demanding that their own megalomaniacal tyrant protect them. And if you want to compare, between Trump and Kim Jong Un, the real-world acts of international aggression and violent invasion of foreign nations, be my guest.

Trump is the head of the largest terrorist organization in the world—the U.S. military—which sticks its nose (and its bombs and bullets) in places all over the world. It has murdered millions of foreign civilians, in many different countries. This is not debatable. Yet Trump still has the gall to pretend that the head of a rag-tag band of impoverished goose-steppers over in Asia is being a mean bully to him. It’s the same as some bratty little sadistic narcissist kid on a playground trying to instigate a fight while playing the victim, so he has an excuse to beat up on someone else.

That’s not to say that Kim Jong Un isn’t himself a delusional, power-happy tyrant. Of course he is. And if he had the means to (he doesn’t), I’m sure he would play the imperialist war-monger game too. But basically all he has to prop up his two-bit dictatorship is the ability to publicly huff and puff, posturing and blustering to put on a show to try to impress the poor saps who his regime currently has subjugated. In other words, he is Trump, but with far less potential for actual death and destruction.

(As an aside, if the violent actions of a nation’s rulers, or its military, justify the mass murder of the people of that nation, then all Americans deserve to die. Keep that in mind before you start babbling about how anyone in North Korea is somehow an accomplice and deserves whatever they get for going along with such an irresponsible “leader.”)

The following is true of most people in positions of political power, but it is all too painfully obvious in the case of Trump: those who seek dominion need dangers, threats and conflicts (real or invented) to serve as excuses to use power. If they don’t—if they sit around doing nothing, saying everything is pretty much fine—then they feel like the worthless, unnecessary little leeches that they are. Who would give a crap about Donald Trump at all if he didn’t have some battle or crusade (however imaginary and bogus they may be) to wage? The Orange Fuhrer wants power, glory and adoration, and that requires some major conflict for him to handle. So if there isn’t a real one, he will create one. And no, this is not at all unique to Trump, nor is it at all a new phenomenon. In fact, here is how it was expressed over two thousand years ago (translated, obviously):

“When the tyrant has disposed of foreign enemies by conquest or treaty, and there is nothing more to fear from them, then he is always stirring up some war or other, in order that the people may require a leader.” – Plato

So yes, when you see such a twit tweet, there is some reason to be alarmed. No, not by the paper tiger in North Korea. Only by the unstable sociopath in the White House. Ironically, a number of people were very vocal about supporting Trump for President precisely because they were scared that Hillary Clinton would be a blood-thirsty tyrant, ready to start World War III at the drop of a hat. Which, of course, she would have been. Just like Trump is. (In the show that is U.S. “politics,” the only puppets who ever get anywhere near the throne are those who will be good little war pigs for their masters, regardless of what they might pretend to be in order to get elected.)

So are we doomed? Well, things ain’t looking great right now. However, the American people are not quite as stupid as the media might make you think, and politicians can’t make war all by themselves. If the people don’t fall for the rhetoric, don’t give in to the fear-mongering bullshit, and don’t become emotional, blood-thirsty imbeciles, then the war-mongering plans of the parasites just fizzle and evaporate. So don’t fall for the scare tactics of jackasses like Trump, and try to stop the people you know from falling for it. In other words, don’t be one of the useful idiots that this quote, from the founder of the Nazi Gestapo, describes:

“Why, of course, the people don’t want war. Why would some poor slob on a farm want to risk his life in a war when the best that he can get out of it is to come back to his farm in one piece? Naturally, the common people don’t want war; neither in Russia nor in England nor in America, nor for that matter in Germany. That is understood. But, after all, it is the leaders of the country who determine the policy and it is always a simple matter to drag the people along, whether it is a democracy or a fascist dictatorship or a Parliament or a Communist dictatorship … Voice or no voice, the people can always be brought to the bidding of the leaders. That is easy. All you have to do is tell them they are being attacked and denounce the pacifists for lack of patriotism and exposing the country to danger. It works the same way in any country.” – Hermann Goering

Larken Rose is an anarchist author best known for challenging the IRS to answer questions about the federal tax liability of citizens, and being put in prison with no questions answered. He is the author of The Most Dangerous Superstition.