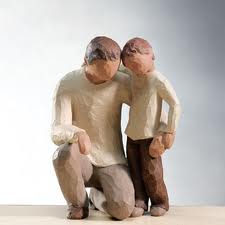 My husband Ted did not come to the unschooling life as quickly or as easily as I did. It was kind of a long road for him, with some serious doubts and struggles along the way. So it’s been very cool to watch as he has become increasingly confident in the unschooling philosophy and his ability to practice it. In fact, there are plenty of times now that I find I’m the one learning from him. Like the time he talked to Thomas about being a work in progress.

A couple of nights ago, Ted demonstrated the power of the unschooling, or peaceful parenting, approach when it comes to sibling issues. Thomas and Faith had been playing outside when suddenly things started to go south. Faith did something that annoyed Thomas, and he launched into a series of teasy insults precisely aimed at pushing her buttons. He was wildly successful in his endeavor, and Faith came careening into the house knocking over pretty much whatever got in her way as she rocketed upstairs to the solitude of the calmful room.

Now, about 3 minutes before this scenario, I had just finished tidying up the house. So I don’t need to tell you what my first reaction was. As Ted came in to check on Faith, I hurled a quick, “Don’t even think about cleaning this up for her!” in his direction before heading off to find some solitude myself.

I’ve lived the unschooling life long enough to recognize a less-than-helpful first reaction, so I took some time to get myself centered and figure out where to go from there. But as it turned out, I didn’t need to. Before long, I overheard Ted gently speaking to Thomas. He didn’t say much. But what he said had a real impact.

“Look, Bud, ” Ted began quietly, kindly, “I want you to see the power of your words.” He then took Thomas on a short tour through the path of destruction. Without another word, Thomas leaned over and began to clean up the mess. I think he was really surprised when Ted stopped him.

“That’s not why I showed this to you, Bud,” Ted explained. “I’m less concerned about the mess than about your relationship with your sister. Looks like she’s really upset.”

That’s all it took. Thomas got it. When Faith rejoined the family later that evening, the two of them worked things out. They did it on their own. They didn’t do it because they were shamed, or punished, or forced to offer an apology they did not want to give. Because Ted had the wisdom to offer some well-timed guidance instead of some heavy-handed consequences, Thomas and Faith were able to take responsibility for repairing their own relationship.

And just in case you’re wondering, yes, Faith did clean up the mess. With Ted right by her side.