Biology teachers often start their courses by reviewing the scientific method.  Stripped down to essentials, this means:

2. Run an experiment to test the hypothesis.

3. Tentatively accept your hypothesis if the experiment works; otherwise, go back to Step 1.

This story isn’t entirely wrong; genetics really does begin with Mendel’s plant hybridization experiments.  If you thoroughly peruse a typical biology textbook, however, much of the content isn’t based on experiments.  Take anatomy.  Do biology textbooks teach students about the circulatory system by describing experiments?  No. Instead, they present and discuss a tidy diagram like this: 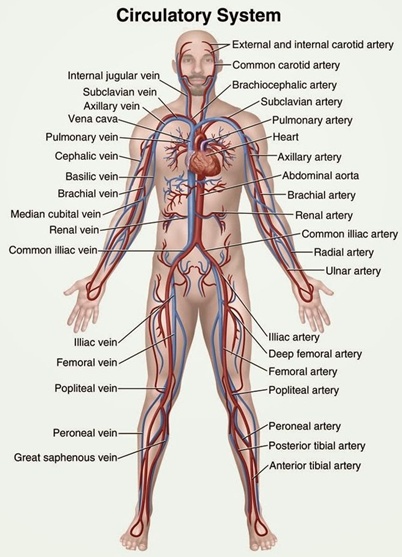 Are the textbooks glossing over a pile of experiments from which these diagrams derive?  Again, as far as I can tell, no.  These diagrams are based not on experiments, but on something totally different: painstaking observation.  We don’t know the heart pumps blood because we randomly assigned half the animals in a sample to have their hearts removed.  We know the heart pumps blood because a bunch of smart people looked.  The same goes for a vast body of anatomical truths.  Where’s the experiment testing the hypothesis that the stomach digests food?  Or the experiment testing the hypothesis that biceps attach to the radius in the forearm?

My point, of course, is not to criticize biology but to understand it.  Naive philosophers of science notwithstanding, biology is packed with useful non-experimental knowledge.  In principle, you could experimentally remove animals’ stomachs and show that digestion stops.  But you could use the same method to confirm the hypothesis that the brain digests food, because removing the brain also leads to the cessation of digestion (not to mention death).  And in any case, what’s the point of these experiments?  The prevailing descriptive approach already provides fine answers.  Methodological purists who cry, “Science is experimentation” aren’t just silly.  If we took their dogmas seriously, we’d have to throw away a vast body of precious knowledge.

The contrast between rhetoric and reality is even stronger in my own field: economics.  Economists are vocal proponents of the simplistic scientific method.  If they can’t present their work as experimental, they strive to label it “quasi-experimental.”  But if you read an introductory economics text, virtually none of the content is based on experiments.  Instead, good economics texts are packed with truisms based on calm observation of humanity: incentives change behavior, trade is mutually beneficial, supply slopes up, demand slopes down, excess supply leads to surpluses, excess demand leads to shortages, externalities lead to inefficiency.  These lessons are as undeniable as “the heart pumps blood” and “the stomach digests food.”  But they’re nevertheless supremely insightful and useful.  Designing social institutions without considering incentives is as absurd trying to stuff food down people’s lungs.

But haven’t economists learned quite a bit from experimentation?  Of course; my own department is full of experimental economists.  My point is that economics, like biology, is packed with precious non-experimental knowledge, too.  It’s still science; indeed, it’s some of the best science ever done.  We shouldn’t let the genuine triumphs of the experimental method overshadow the rest of the field.  And we should staunchly resist anyone who uses methodological dogmas to veto well-established truths – or selectively pretend they don’t exist.

Whether you’re in biology or economics, writing textbooks won’t get you tenure.  But the non-experimental knowledge contained within these textbooks could easily be worth more than all the experimental papers published in their respective field the last fifty years.  What’s the final verdict?  For biology, I’m happy to defer to biologists.  For economics, however, I’ve been around long enough to confidently rule in favor of the textbooks.

Global Food Shortages: How Does Your Garden (or Pantry) Grow?
The Corruption of Money, a Key Source of The Corruption of The World
In Defense of Ideology
Lying to Congress Isn’t a Crime Because Their Laws Don’t Apply
Daylight Saving Time: Finally, Some Government Action I Can Get Behind
A Taxing Day
Reflections on the Ukrainian Refugees
BLM Versus Collective Guilt
War is the Crime; Its Perpetrators Seldom Face Justice
Musk May Help End Liberal Narrative