Something I often witness in the world of child-rearing is that many practices and products are in place at the convenience of the parents, but are in turn, dis-serving the child it is aimed to support. In a time where ageism has unconsciously seeped into the fabric of society, I guess it isn’t a wonder why we have such a difficult time connecting to the innate functions and needs of our children. One way I see this showing up is in the products that are mass marketed to parents and have caught on as sought after components to raising a baby. In my own opinion, (and some compelling research) these items are tacky and unpleasant, at best, and can undermine a baby’s innate intelligence and interrupt natural development, at worst.

The most empowering thing (well, one of the..) I realized as a mother is that we often times overcomplicate raising children, and we don’t have to. In fact, everyone, including your child, benefits when you don’t. Not to mention you save time, money, and frustration in the process. Here are 6 items that you can do without (mostly) because they can do more harm than good:

I want to get this out of the way first because it will probably be more controversial (so hopefully you keep reading). In short, anything too confining for long periods of time isn’t optimal for child development, because children are not meant to be confined. Many of the things I list will be addressing the issue of over confinement of children. The stroller has children taking on a passive role. Have you ever seen a toddler in a stroller? They can look pretty lifeless. This isn’t the natural state of a child. Once children can walk they can walk along side you, and before then they can be carried in arms or in a carrier. Look I get it. They’re heavy, your back hurts, prolapse, etc. I am not saying to ban strollers always forever and ever. They have a time and a place. I am simply saying that they are way overused and I think it looks like we are carting around a bunch of injured and immobilized people. I didn’t buy a stroller until my son was 16 months old and even then it only stayed on our front porch and I used it a few times a week for several months to push him around the block for nap time. We never took it out in public and I never missed it. I say that to prove it is possible to be out and not ever use a stroller. Yes, it is true that I had a couple of advantages such as only having one kid and a partner at the time who would be the one to carry him. With that said, I was out plenty of times with him alone and never used a stroller. Now he is 2.5 and walks everywhere. Again, I am not saying we should ban strollers, nor am I judging you for using them. I just want to offer a different perspective and raise awareness in how we use them. Katherine Martinko writes in her article titled, ‘Why Strollers are Making Kids Passive, Uninquisitive and Fat,’

“Kids learn how to navigate and maneuver with agility, develop muscular strength, and burn calories. Walking also forces kids to make independent decisions constantly, which in turn teaches them that they have unique desires; according to researchers, this is a crucial step for socio-emotional development.”

Another important thing to note is a young baby’s need for touch and body contact. Studies actually show that babies who are touched and held more are less likely to develop emotional, behavioral, and social problems than children who had this need met. Lack of touch also raises cortisol levels (the stress hormone). I don’t think that just because one uses a stroller means that they don’t touch their baby, but over a prolonged period of time, the frequent use of devices that detach us from our children when we’re supposed to be in contact (think of cribs, too) can have an effect.

Some things I understand are easy to buy into, but nothing is harder to see for me than a rapidly growing baby foot trapped in some bulky shoes, or a baby trying to walk in tennis shoes. Ok, so a lot is harder to watch, but you get the point. I know that parents are concerned with safety and believe shoes are a must, but if that is you then I would recommend opting for thin, no arch sole shoes instead. A really good option are the Sayoyo Brand shoes, and if you live in a colder climate where cold is your concern then check out these Zutano’s.  My absolute favorite baby and toddler shoe of all time are from Little Pitterpat. They are 100% Vegan and have the cutest designs, in my opinion. My son has had two pairs of these. The have an organic cotton line, and are nonrestrictive, meaning they allow the feet and toes to spread out as they are meant to. Right now you can get 10% off a pair of these shoes if you enter the code EARTHMOM. Just go to the “apply shop coupon code” in the shopping cart under “how will you pay.”

Personally, I would recommend no shoes at all until they are walking, but even then, we opted for our son to be 100% barefoot. I know that’s not everyone’s cup of tea, and I know that shoes make a cute outfit, but atrophied feet isn’t cute. Wearing confining, raised sole shoes while the foot is growing and a human is learning balance and walking can cause a slew of issues such as weakened foot muscles, bow-leggedness, poor posture, and poor agility to name a few. To read more about foot health and why my son doesn’t wear shoes, check out a previous article I wrote where I interviewed my son’s father- a barefoot, long distance runner- on this topic. [Read it here].

Items like these display our fundamental lack of trust in our children’s natural abilities to accomplish milestones. Not only their ability to learn to walk on their own, but also to entertain themselves. I’m not sure how we thought humans learned to walk for the entire history of humanity, but I promise it wasn’t with the assistance of a walker. Walkers are for the physically impaired, and our children are far from tha. Quite the opposite, actually. They were born with all the mechanisms they need to know how to walk without assistance. Walkers allow mobility beyond what a child is actually capable of, and therefore they cannot navigate themselves as well and are prone to accidents. Dr. Allan Green, pediatrician says,

“They find delight in accomplishment as they achieve their goal of a toy out of reach. Later, the focus of their work will turn to pulling themselves upright. Babies who use a walker skip some of this magnificent developmental journey. With their toes in an unnatural position, they glide across the floor with ease, moving upright before their time.”

There’s a pretty consistent rule that I like to follow when it comes to babies. If they can’t do it on their own then don’t do it for them (there are exceptions, sure). You see, babies are pretty simple. Eat, sleep, poop (basically). Everything else comes with time and on their natural developmental journey. We don’t need to hold up their hands to walk them (and we shouldn’t), we don’t need to shove a spoon in their mouth to feed them (they will eventually do this on their own), and we don’t need to place them in big bucket seats to have them sitting up before they are physically capable of doing so by themselves. I will admit, I had a Bumbo gifted to me and I used it a few times before I was really thinking about this concept. I’m not a saint. There is a reason that physical therapists have spoken out against this baby seat. Colleen Harper, P.T. told the Chicago Tribune,

“No equipment enhances a child’s motor development; equipment is a ‘babysitter’ so that a parent can cook dinner, eat dinner or take a shower,” Harper said. “A gross motor skill like sitting is achieved through movement and practice. Children fall out of Bumbo seats because they do not yet have the requisite strength, balance, and coordination needed for sitting.”

Bumbo claims that sitting in their seat places the pelvis in a type of tilt that supports lumbar extension, but Physical Therapist Mary Weck says it does the exact opposite.

“It puts the baby’s pelvis in a posterior tilt, which facilitates lumbar flexion, not extension. That puts the baby’s chest behind the pelvis. Then the head has to come too far forward. It’s no longer positioned directly above the chest.”

You can read the full article in the Chicago Tribune [HERE.] 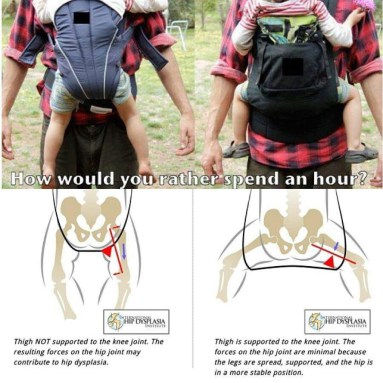 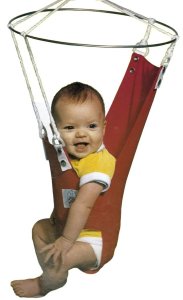 If everyone could see the miraculous capabilities and intelligence that is innate to children, contraptions such as these would quickly and easily be seen as undermining and offensive. The problem with these jumpers is similar to that of walkers and poor baby carriers. They provide a false sense of motor development, which in turn hinders true motor development, and also promotes poor posture because the weight is supported by the crotch, hips, and underarms, which has the baby leaning forward instead of upright. To jump, the baby has to push off with her toes, so it is likely that she will use her toes when trying to walk, which is improper posture. Poor posture has been linked to things such as depression, gastrointestinal issues, headaches, breathing problems, etc.

Fighting off all the excess that we’re told we need can be difficult, but totally possible. It comes down to being informed and gaining awareness of what it takes to raise healthy children. Then, everything we are bombarded with that doesn’t fall into that category will easily and effortlessly fall away. You won’t even see or consider it anymore. Parenting becomes cheaper, less stressful, and you get to relax into the knowing that you don’t need to constantly entertain and push your child to reach milestones. They will get there on their own time. 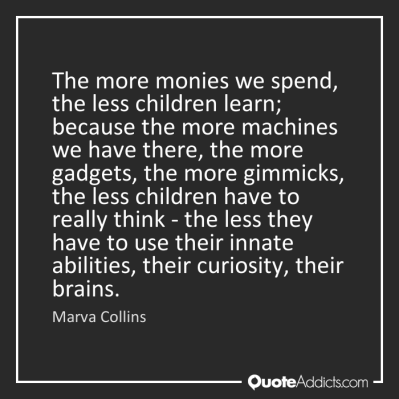