A late congrats to Sean in Hawaii for getting traffic tickets dismissed with prejudice, and thanks for sending over the documentary proof.

Sean defended against these false charges on behalf of a minor, one of the charges was not having a valid driver’s license: 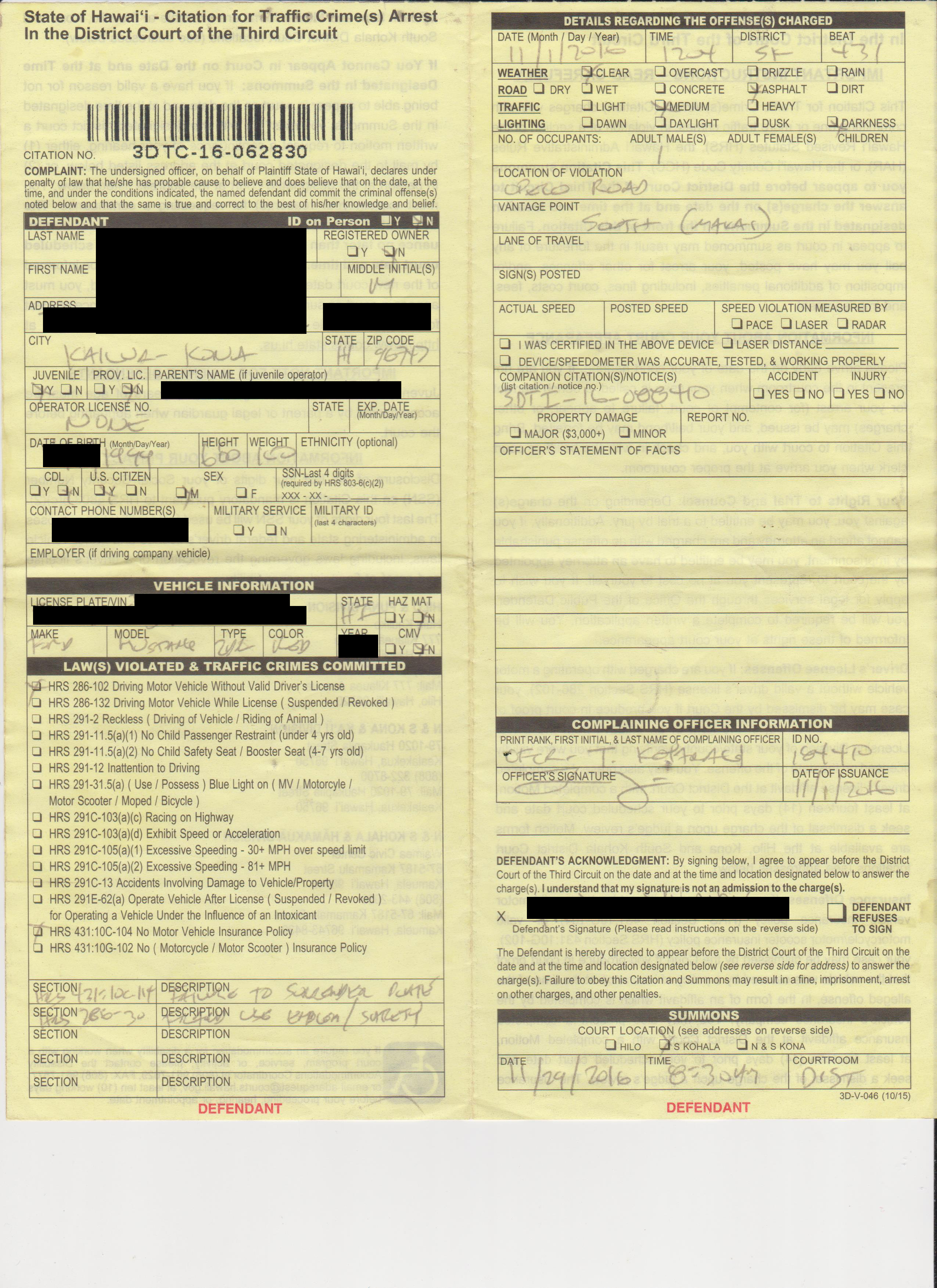 Sean filed the motion to dismiss and discovery/Brady request.  Instead of providing the evidence their claims were based, the prosecution filed a motion for nolle prosequi, to dismiss with prejudice.  The prosecutor wrote, “[I am] unable to prove this matter beyond a reasonable doubt.” 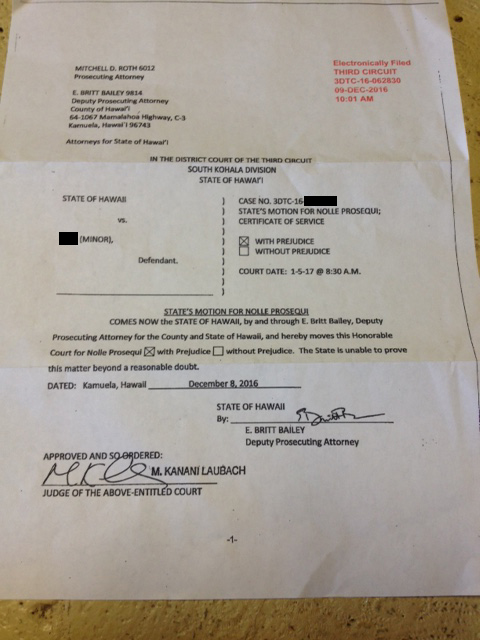 The judge granted the motion, dismissing with prejudice.  With prejudice means the prosecution may not refile the charges for any reason, even if they somehow conjured up evidence to prove the charges beyond a reasonable doubt.

Sean made the same challenges as we always do, asked for the same evidence and competent witnesses.  We challenge the opinion political rules, so-called “laws”, apply to us just because we’re physically in Hawaii.  This is the basis of jurisdiction and is an essential element of the charge.  We also want the names of the witnesses with personal knowledge of this evidence.  If the prosecution’s witness does not have personal knowledge, then the prosecution is required to make that disclosure, it’s Brady material.

There is no such evidence, so the prosecution cannot meet their burden.  While critics will claim the dismissal had nothing to do with Sean’s defense, claiming there are many reasons why the prosecution would seek dismissal; I think they all lack merit.

The prosecution did not seek dismissal without prejudice, instead with prejudice, on a code violation, an almost guaranteed conviction.  This is an alleged code violation, non-compliance with the driver’s license statute.  There is no disputing the minor given the ticket has no license.  This is a strict liability prosecution, all the prosecution has to do to get a conviction (if there is proof the code applies) is to show the DMV record showing the defendant does not have a driver’s license.

The defendant still doesn’t have a license, and never disputed that.  All they did was dispute the prosecution’s claims the constitution and laws applied to him because he was physically in Hawaii.  Because if the prosecution cannot prove the code applies, then they cannot “prove this matter beyond a reasonable doubt.”

When the foundation of your case is the laws apply to the defendant because he is physically in Hawaii, then your witness, who made the initial claim, has to have personal knowledge of that in order to testify.

A witness may not testify to a matter unless evidence is introduced sufficient to support a finding that the witness has personal knowledge of the matter. Evidence to prove personal knowledge may, but need not, consist of the witness’ own testimony. This rule is subject to the provisions of rule 703, relating to opinion testimony by expert witnesses.  Rule 602, Hawaii Rules of Evidence.

You can claim you don’t have to prove that, but that contradicts the rules, as well as being unfair.  The cop has to testify he saw the defendant violate the law.  If he is testifying the laws apply, then he is required to have personal knowledge of the matter.  There are no exceptions for the prosecutors who feel they don’t need to prove their claims are true.  It is prosecutorial misconduct:

Not only does it contradict the above rules, but is evidence of a double standard.  Not that I expect it, but there is no way I would be permitted to argue without evidence and a logic basis.

What couldn’t the prosecution admittedly not prove beyond a reasonable doubt here?  If they could prove the code applied, then it would be easy to prove the defendant drove without a license.  So proving the defendant drove without a license is easy, but not possible to prove the license was required in the first place.   When confronted with their lack of evidence, they moved for dismissal.

So did they want dismissal because it was “just too much trouble”?  Yeah, prosecuting people without evidence, and just using logical fallacies is probably real tough.

Are there other explanations for the dismissal, yes of course.  We have to go based on the evidence though.  The evidence, without assumptions, points strongly to the prosecution’s lack of evidence proving the constitution/laws applies.

If you disagree, then please present your evidence and logic basis.

Don’t Make Enemies over Politics
Missouri v. Biden: Putting America’s Lysenko Under Oath
So Long as There are Nukes, We Had Better Hope We Live in a MAD World
Who Will Make You Safe?
Rothbard Contra the Demagogue
Don’t Care about Fake Laws, Crimes
The US “Intelligence Community” Can’t Be Trusted to Police Itself
Imperial Delusion is the Enemy of Peace and Prosperity
Are Bosses like Rulers?
Swapping Politicians Pointless Change