This is another disparate group of influences, R. Buckminster Fuller, Edward Tufte, Douglas Hofstadter.  The first is from the 60s, the second from the 90s, and the third from the first decade of the 21st Century, in the order that they came into my life.  But all three think outside of the boxes which have contained so many of us.

He was a native, like my Mother, of Milton, MA, but twenty-seven years older.  He was a navy man, like my Grandfather.  He was revered in the urban planning field, although he had none of the instincts for socialism which plagued that following.  I was briefly in graduate school to study urban planning when I discovered Bucky Fuller.  He also had some false starts before becoming himself, maybe it was his experience with that which made me flee so soon from central planning. 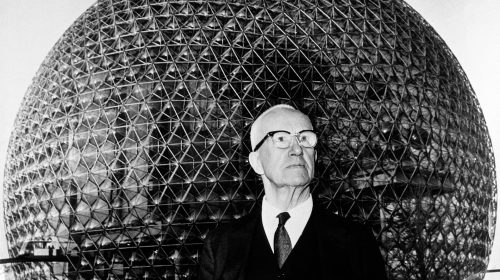 I had the wonderful opportunity to see one of Fuller’s geodesic domes at the Expo ’67 site, in Montreal, QC, Canada, in the summer of 1968.  In 1971, I saw the Gateway Arch in St. Louis, MO.  I suppose that RBF may have been the most famous architect in America after Frank Lloyd Wright.  Not because he created styles that are with us in residences and public buildings today, but because he took architecture in a very different direction.  His mind was obviously consumed with self-organizing phenomena.

I remember very clearly, not verbatim, but conceptually a thing that he said which sticks with me today:  the everyday man has been serving, has been owned by, the king, but the direction of history shows that more and more has been spread from the king to the common man.  Such that most of us have things like smart phones and good food to eat — things that the richest man in the world could not have owned just a few generations ago.  It was this optimism by Fuller that made me the optimist I am today. 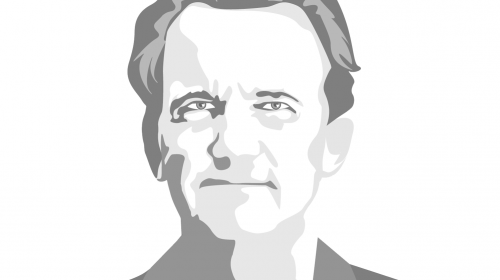 Like Buckminster Fuller, I have been a tinkerer all my life.  I began tinkering with computers in the 1970s.  I was most impressed with their potential, not with their effect at that point in time.  Their potential was in reaching user goals, in getting things done, in allowing new approaches.

I very quickly learned that it was in terms of improving human communication that the computer would become the ultimate human tool.  Communication is made of information, communication is of no small degree.  An information system exists with every human endeavor, therefor it’s primary component is people.  The glue that holds the system together is communication.  Computers have been evolving to provide ever greater communication, self-ordered as information, among people.  The geeky parts like hardware, software, data, and procedure are critical too, but they are incidental, able to be shaped to serve the fundamental relationship between sentient beings, beings in communication with one another.

Edward Tufte was the first person I became aware of who could see that fundamental relationship.  He could see that the great purpose of information was knowledge, and beyond that, wisdom, but within that, practical and correct decisions.  To me, the first compelling case that Tufte made was the story of how data was misrepresented in the events leading up to the Challenger disaster of 1986.  Tufte has said “The minimum we should hope for with any display technology is that it should do no harm.”  The slides viewed in this tragedy were flawed, with life and death criticality.  I soon ascribed to the goal of eliminating usability problems in information.  The second famous case that Tufte pursued was that of the Florida butterfly ballot which affected the course of history.

Tufte also said, ” … nature’s laws are causal; they reveal themselves by comparison and difference, and they operate at every multivariate space/time point.”  In this I saw further evidence of the connectedness of reality 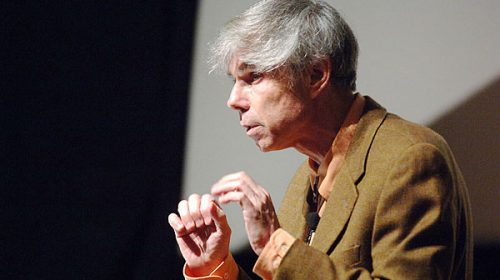 I saw Douglas Hofstadter speaking from the stage in Memorial Hall at the University of Kentucky.  His topic was Endless Beauty.  For examples, he played recordings of Billie Holiday.  They were “This Year’s Kisses” and “Gee, Baby, Ain’t I Good to You?”  He said in a WIRED magazine interview, ” … take Billie Holiday, singing with some of her accompanists in the 1930s – playing and improvising. Now, if all that incredible poignancy turns out to be something that can be mass marketed on a chip, it will destroy my image of something very deep and sacred to the human spirit. I’ll just have to eat my words and say, “Well, I guess all that complexity was just another kind of circuitry we can manufacture.”  For an individualist this is gold.  Hofstadter had confirmed my conviction that beauty and uniqueness are found everywhere, but cannot be replicated mechanically.  They can be simulated but not replicated.

Even if you find that things in your life are tedious, repetitive, and humdrum, it is true that your responses to those things are unique and can be changed by you.  Instead treat tedium as an endless generator of unique instances.  Look for the differences … and the similarities.  The differences are infinite, the similarities are astounding.  Dwell on probabilities and possibilities, not on the way that events can overwhelm.

Here are some of the observations about the world that Hofstadter has fashioned:

The nice thing about having a brain is that one can learn, that ignorance can be supplanted by knowledge, and that small bits of knowledge can gradually pile up into substantial heaps.

One of the basic tenets of Zen Buddhism is that there is no way to characterize what Zen is. No matter what verbal space you try to enclose Zen in, it resists, and spills over. It might seem, then, that all efforts to explain Zen are complete wastes of time. But that is not the attitude of Zen masters and students. For instance, Zen koans are a central part of Zen study, verbal though they are. Koans are supposed to be “triggers” which, though they do not contain enough information in themselves to impart enlightenment, may possibly be sufficient to unlock the mechanisms inside one’s mind that lead to enlightenment. But in general, the Zen attitude is that words and truth are incompatible, or at least that no words can capture truth.

It turns out that an eerie type of chaos can lurk just behind a facade of order – and yet, deep inside the chaos lurks an even eerier type of order.

Meaning lies as much
in the mind of the reader
as in the Haiku.

How gullible are you? Is your gullibility located in some “gullibility center” in your brain? Could a neurosurgeon reach in and perform some delicate operation to lower your gullibility, otherwise leaving you alone? If you believe this, you are pretty gullible, and should perhaps consider such an operation.

The key question is, no matter how much you absorb of another person, can you have absorbed so much of them that when that primary brain perishes, you can feel that that person did not totally perish from the earth… because they live on in a ‘second neural home’?… In the wake of a human being’s death, what survives is a set of afterglows, some brighter and some dimmer, in the collective brains of those who were dearest to them… Though the primary brain has been eclipsed, there is, in those who remain… a collective corona that still glows.