When people defend against bureaucratic attacks, they tend to be intimidated by prosecutors.  After all, they are professionals, they have advanced degrees and much more experience in the courts than most.  Don’t let that intimidate you, most times they have no evidence and rely on fear and logical fallacies.  I’ll cover another in this article, the common strawman. 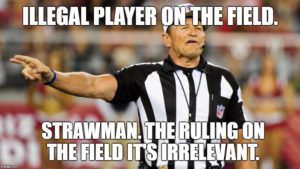 Below is from a pleading filed by a prosecutor in Ohio, Gene Barrett.  This is his second response to a motion to dismiss for prosecutorial misconduct, he is accused of arguing without evidence.  More of the opposition is in the video below.

Barrett is knowingly raising an issue never raised, he’s claiming the defense is arguing there is no jurisdiction without his consent.   He then cites a court opinion that the argument has no merit.  Barrett then claims victory.  This is a typical strawman which is:

By exaggerating, misrepresenting, or just completely fabricating someone’s argument, it’s much easier to present your own position as being reasonable, but this kind of dishonesty serves to undermine honest rational debate.

The actual position raised is: the prosecution has no evidence to support their claim the constitution (a written instrument from 1803) applies to me just because I’m physically in Ohio.  This makes Barrett’s entire argument irrelevant.  None of his citations, none of his legal analysis have anything to do with the actual issue raised.

Barrett is not just lying here, he is obstructing justice and it is prosecutorial misconduct.  It is also a violation of the Rules of Professional Conduct:

A lawyer shall not bring or defend a proceeding, or assert or controvert an issue in a proceeding, unless there is a basis in law and fact for doing so that is not frivolous…

While a few dishonest critics will cry I am bringing high school debating rules into court and court is based on “legal logic”, such criticism does not negate how dishonest Barrett’s opposition is.  Did Barrett assert an issue that is false, that does not have a basis in law and fact?  Yes, any idiot can see that.

This is also why most of the time prosecutors keep their mouths shut in court and don’t respond to our paperwork.  They have no evidence, they are just men and women forcing us to pay them.  They are criminals, and criminals have no need for petty things like proof and logic.

So don’t let these lawyers intimidate you with their legalese, it’s easy to recognize their dishonest “legal logic” for the trash it is.  If they had evidence to support their claims, then they would just present their evidence.  They would not raise strawman arguments, argue for a double standard or just chant “frivolous” over and over.  Those with evidence to support their claims just present the evidence.

Govern Yourself So You Violate No One Else
Be Cure to Government’s Disease
The Ironclad Argument Against Racism
Fossil Fuels Save Lives
Why Elon Musk Shouldn’t Buy Twitter
Yes, Corporations Have Free Speech Rights Like Individuals
The State Took Her Home Because She Missed $900 in Property Taxes
Shame Ukraine, Russia Suffering
The Collapse of “Peace and Security” For Freedom and Responsibility
Our Age of Character Assassination