There are two arguments critics raise when trying to discredit my work regarding jurisdiction: 1) it requires no evidence to prove the claim is true; and 2) is easily proven if accused of violating the “law” within a certain territory.  The first claim is so silly it should not have to even be addressed, though I still will as both are untrue.

The documents below and in the video are from a traffic appeal in New Jersey, Mark in New York, provided me with the transcript.

Also from the Cornell Law School:

The term jurisdiction is really synonymous with the word “power”.   Any court possesses jurisdiction over matters only to the extent granted to it by the Constitution, or legislation of the sovereignty on behalf of which it functions.  (Emphasis mine.)

Jurisdiction is based on the constitution applying to people in a certain territory.  Yes, so-called federal jurisdiction is not so limited, but is still allegedly acquired because someone was born physically in the United States.  As far as federal law applying to people who have never physically been to the US, it’s just a blunt assertion of power.  Knowing this we can now debunk the above claims.

First, critics know the evidence must be presented to prove jurisdiction.  If we file against the IRS, then we have to prove the court has territorial/personal jurisdiction, it is not a privilege the judge will extend to us.  After all, that is something only federal prosecutors are given.  It’s been held many times by the Supreme Court:

There is also Rule 3.1 of the Rules of Professional Conduct:

A lawyer shall not bring or defend a proceeding, or assert or controvert an issue therein, unless there is a basis in law and fact for doing so that is not frivolous, which includes a good faith argument for an extension, modification or reversal of existing law.

And Rule 11 of the Rules of Civil Procedure as well as crimes such as obstruction/abuse of process and prosecutorial misconduct:

Unless you are raising a theoretical issue of law, you need evidence and a logical basis to support your claim.  Some argue that the applicability of this written instrument is a theoretical issue requiring only the say so of those who inflict it on others.  This is wrong as practical application is never theoretical as I’ve already covered.  Below are statements from an appellate judge in New Jersey who also rules that jurisdiction must be proven with evidence and witnesses.

The second part is equally false, that being territorial/personal jurisdiction is proven by only showing the alleged offense occurred in a territory over which the constitution/law give the court power to act.  This presupposes the prosecution’s claim the constitution, a written instrument, applies to everyone just because they are physically in that geographic area.  Presupposing your foundation claim (element of the charge) is true is not proving anything, it’s an example of a logical fallacy, such as circular logic and proof by assertion.  In court the objections are lack of foundation and assumes facts not in evidence.

The appeal documents show a judge allowing a prosecutor and judge to get away with arguing without evidence.  All three lawyers just assumed, over Mark’s many objections, the constitution applied just because he was physically in New Jersey.  The prosecution was not required to show any proof, even though the judge affirms it was the prosecutor’s burden.  The first document just identifies the proceedings and confirms where I am drawing the documents from. 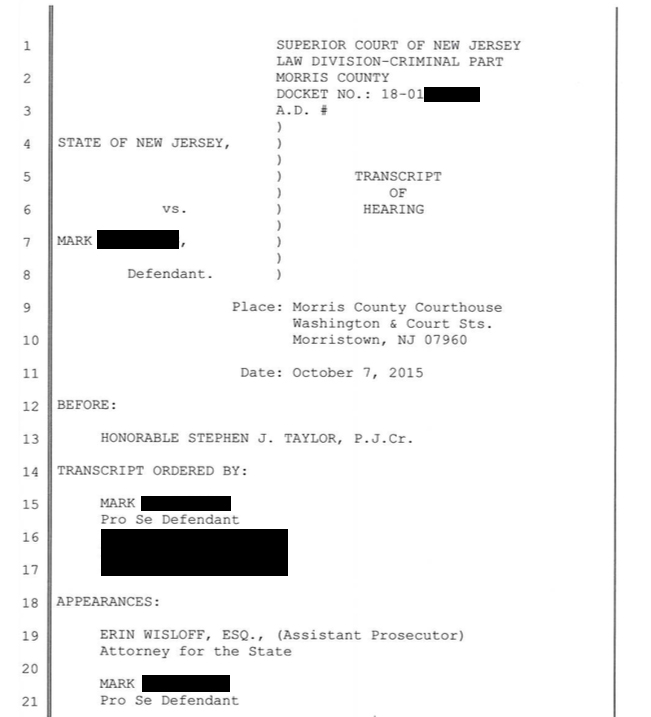 The judge agrees with Mark that jurisdiction must be proven at trial (it still has to be shown before trial). 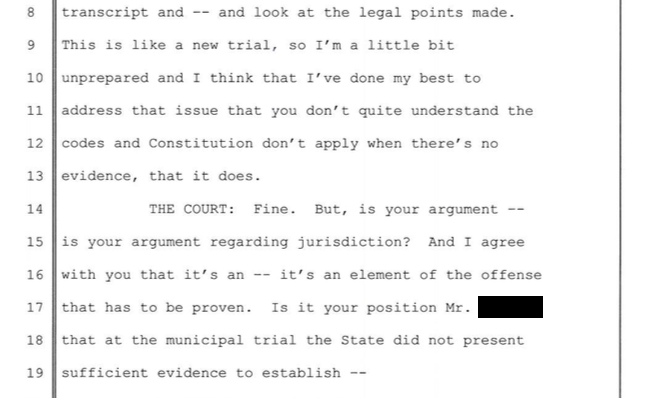 The judge agrees it’s an element of the charge, as an element of the charge, it’s supposed to be proven with evidence from a competent witness, one with personal knowledge.  Instead, all three lawyers just assumed, as irrefutably true, the constitution (written instrument) applies to Mark because he’s physically in New Jersey.  The judge even quotes the code as if anyone has presented any evidence the constitution and laws apply in the first place: 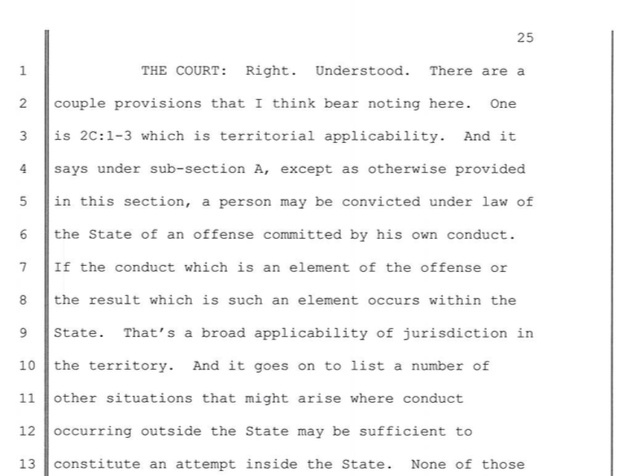 The judge knows the evidence must be from the prosecution and their witnesses, but seems oblivious to the fact that he, like the previous judge, is presuming an element of the charge.  He even knows the prosecution’s witness was declared incompetent to determine the constitution and code apply to Mark.  Despite Mark’s objections and the lack of evidence against him, the judge ruled in favor of the prosecution.

This is in stark contrast to the judge in Indiana who did require the prosecution to comply with the Brady request and also provide the evidence requested.  When the judges try to apply the rules to the prosecution, we usually get a withdrawal and dismissal.  When they refuse to though, and instead presume an element of the charge is irrefutably true, then we get false convictions like the one with Mark.

Irrefutably true claims are evidence of a rigged game.  But, if you disagree with my analysis, if I have my facts wrong, or I’ve made leaps in logic, please feel free to call into a live broadcast and correct me.