Congrats to Corey in California for taking a principled stand against the predators in Blythe, California and getting a dismissal.  Despite a criminal trial set, the police officer who wrote the ticket decided to not show up.  No motion or notice to the court or Corey.

And thanks for Corey for sending me the documentary proof so I could post: 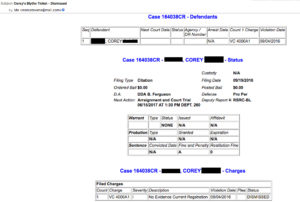 I’m already aware that tickets are dismissed and cops blow off criminal trials for a variety of reasons.  What cannot be reasonably disputed is the cop was incapable of making an actual case and proving jurisdiction against Corey.

This was a criminal proceeding instituted by the cop who just didn’t show.  If Corey did that the judge would charge him with failure to appear and issue a warrant for his arrest.  Good thing there are different rules for the King’s men.

At no time has the cop, despite almost a year to do so, provide any proof of his claims against Corey, that is, facts proving the constitution and code apply to Corey just because he’s physically in California.  This goes to proving jurisdiction, personal and subject matter.

Critics will claim the cop doesn’t have to prove this claim.  Sure, that is true in practice because they’re criminals.  It’s obviously a rigged game when one party (on the same team as the judge) gets to argue without evidence.  Not only that, but have the argument treated as irrefutable, no defense permitted.

If arguing without evidence was not dishonest, then why can’t we do so?  Why is only one side permitted to do so?  Because they are the side with a prison system at their disposal.

If one of the road pirates charges you, fight them tooth and nail, hold them to their burden of proof and expose them as the criminals they are.

Compulsory Schooling Laws Under Scrutiny in Michigan Following Deadly Tragedy
My Input on the Constitution
No, President Biden, We’re Not Your “Customers”
My Gitmo
Politics is Cruelty
Youth Gun Safety: A Smart Parent’s Guide to Keeping Kids Safe
Elections: Is There Light at the End of the “Big Lie” Tunnel?
It’s Never Been More Important to Skip College
Is It Corruption?
“For the Children”: The Last Refuge of Anti-Encryption Scoundrels