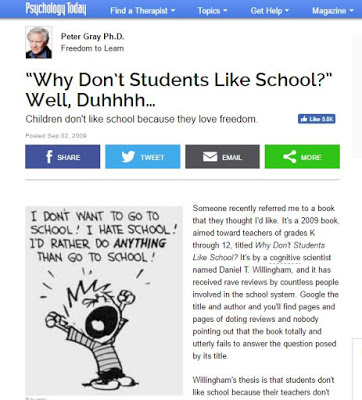 To read Dr. Gray’s full article, click on the picture ^^

Above is the start of the article that I read recently. I made the following short observation on Facebook about compulsory behavior.

The experience of school teaches the same thing as prison does, that survival is dependent on maximum control of the hierarchy. The warden/principal must make sure that all aggression goes down the structure, not up. Neither bullies nor rapists are of any real concern, to the upper tiers, since the lower in the hierarchy a victim stands, the higher the penalties for upsetting the order.

This is an excerpt from Dr. Gray’s premise:

Ask any schoolchild why they don’t like school and they’ll tell you. “School is prison.” They may not use those words, because they’re too polite, or maybe they’ve already been brainwashed to believe that school is for their own good and therefore it can’t be prison. But decipher their words and the translation generally is, “School is prison.”
— Peter Gray

In fairness I should point out that he has engaged in the logic fallacy of presenting an open spectrum of infinite possibilities as only 3 distinct possibilities, all of which favor his premise. He effectively says that ALL children hate school, or they will gloss it over, or they are brainwashed.  But there are at least two more possibilities, the fallacy itself does not make the statement false, and champions of public school may also resort to converse logic fallacies.

I also read about a prison riot this month in the Amazonian jungle of Brazil.  As of the linked article, among 26 fatalities, all were inmates.   I don’t mean to overdramatize my remarks about schools with illustrations from prisons, but the structural mechanics are the same.  The dead people will never learn again, but school children covered in mental scars probably won’t learn much either.

My family and I once lived in the district of the Columbine High School in Littleton, Colorado.  The school showed up on everybody’s map when it became the scene of a massacre in 1999.  If we had not moved earlier back to Kentucky, our younger daughter would have been a student there.  That event alone should teach us to break up the assembly line approach to schooling.  This is an idea we do not seem capable of grasping.