In the past year or so I’ve started to notice a new feature on my phone: with simple artificial intelligence the text messaging app is able to auto-generate simple, relevant replies to text.

So if someone says “hi”, you can say “hi” right on back. But it’s actually more sophisticated than it sounds. It can detect, for instance, if someone is asking you to do something. All I have to do is click on the response I want to send and it flies out to my recipient. 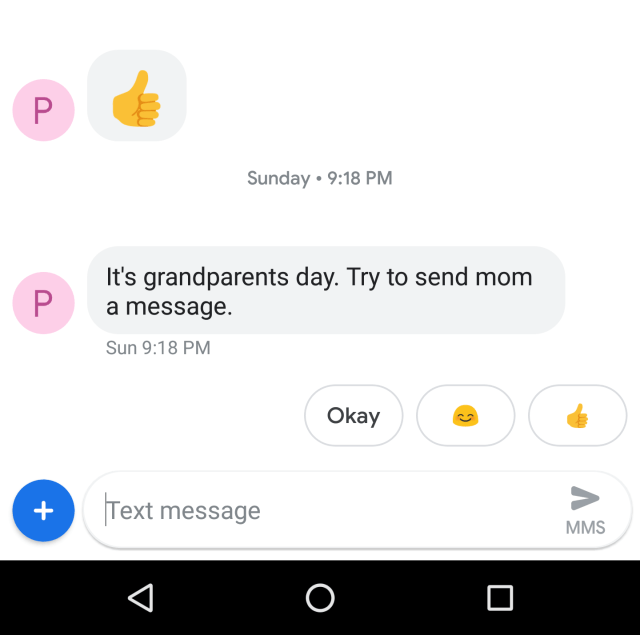 Besides being a nifty feature, this sort of small innovation could save lives.

We all know (to varying degrees) the danger of typing on a phone while driving. Most of us assume that texting and driving might only be ended by an all-out ban. But it’s still inconclusive whether these laws really prevent people from texting. These laws also wrongly impose punishments for “offenses” that don’t have victims (texting – while risky – has no victims; a proportional punishment is only in order for hurting people).

All three are valuable ways to think, but the solution on my Android phone (likely without designed intent) uses technology to take the second approach. By automatically generating most replies, it makes replying to messages far easier. Now to be clear, I’m not saying you should text and drive. But if you were dead set on doing it, this pre-generated, one-tap message would be the one to use.

Every second the messaging app saves you is a second you can keep your eyes on the road and watching out for cars and pedestrians. That’s real incremental progress toward safer roads and drivers – and safer messaging on the road.

This small feature illustrates again how user experience (UX) product designers – like the ones at Google who made this texting update – understand human behavior far better than politicians . Politicians mandate a certain way of doing things and force that mold onto others. Product/UX designers pay attention to what people want and design paths to channel those wants better.

We live in a great race between user experience design thinking and top-down central planning. In our world, both are popular ways to solve problems. I hope that the UX guys win – not just for the sake of human freedom, but also for the sake of real improvements in human safety.

James Walpole is a writer, startup marketer, intellectual explorer, and perpetual apprentice. He opted out of college to join the Praxis startup apprenticeship program and currently manages marketing and communications at bitcoin payment technology company BitPay. He writes daily at jameswalpole.com.