One aspect of the belief in “Authority” is the idea that one has a moral obligation to disregard their own morals/conscience. That comes naturally with the belief that someone else has the right to rule you. Marcie showcases it below through the common refrain, “as long as it’s the law, we should obey it.”

This engagement was interesting for a few reasons:

1. She seemed completely oblivious to the force necessary to enforce “law,” e.g. “I do not support violence.” How else will these “laws” be upheld?

2. She very easily accepts “laws” for what they actually are in the discussion, “the commands of ‘politicians.’”

3. The main point of this: You can set this up by asking a person if there is any “law” on the books which they think is unjust and should not be a law, then ask them if they, or “we” should obey it.

That’s how this one went.

Marcie says here that she thinks she should obey, and be punished for disobeying, “laws” which she does not even think should exist.

She is sacrificing her own morality and will because she has been taught that “Authority” exists and has the right to rule her. 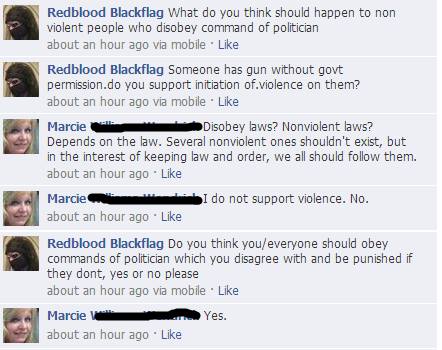 Eliott Travis is dedicated to drawing light to the self-contradictory and violent nature of the belief in “Government,” as well as contributing analysis of current events.