This is from a call of shame with a Canadian prosecutor, sorry there is no audio to post.  It’s about the very common, though very dishonest tactic of flipping the burden of proof.  The burden is on the one making the claim, but when you’re full of crap, you try to flip the burden onto someone daring to question you. 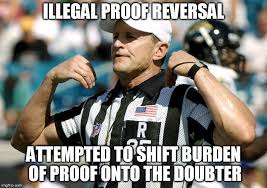 This involves a criminal prosecution, so before you can say principles of logic don’t apply in court, the prosecution, the one making the claims, bears the entire burden of proof.  That burden is beyond a reasonable doubt even if you claim basic logic is not used in the legal system.

This is because logic dictates the one making the claim bears the burden of proof:

Burden of proof (also known as onus probandi in Latin) is the obligation on somebody presenting a new idea (a claim) to provide evidence to support its truth (a warrant). Once evidence has been presented, it is up to any opposing “side” to prove the evidence presented is not adequate. Burdens of proof are key to having logically valid statements: if claims were accepted without warrants, then every claim could simultaneously be claimed to be true.  Source

That last sentence is very important and key to seeing why evidence is necessary, not just opinions supported by more opinions.   Or as I wrote in Government: Indicted, “It’s turtles all the way down.”

So the prosecutor did agree that he operates under the presumption that if one is physically in Canada, then the Constitution and laws apply, the government has jurisdiction.

When I asked him if he had any evidence (facts having a tendency to support/prove a proposition) to support his claim, he said:

I’d have to think about that…OK, I’m not prepared to answer that right now.

I asked him if he had any witnesses to prove his claim was true, witnesses with personal knowledge the Constitution applied to Max just because he’s physically in Canada.  The prosecutor claimed he didn’t need one, he’s only calling witnesses to prove Max did something contrary to the code.

I asked him to confirm he was calling a witness (cop) to testify Max violated the law.  Mr. Prosecutor said he was not, the witness would only be testifying Max did something contrary to the code.  I had to go back to my original point as I felt a stroke coming on if I continued.

This is where Mr. Prosecutor tried to flip the burden of proof, claiming Max had to prove, with evidence, the prosecutor’s claim was false.  Though I asked some questions he spoke over me and hung up on us. 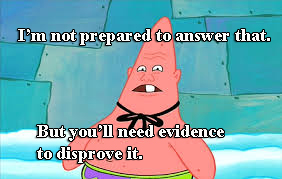 I did get to ask, Doesn’t the fact that you’re not prepared to provide any evidence to support your claim defeat your claim?  I reminded him that he said he wasn’t prepared to answer.

He insisted Max had the burden.  When you have a prison system at your disposal, there’s no need for logic and fairness.

In court we need to object to this, asking if the prosecutor bears the burden of proof.  They will admit they do, that’s just too obvious and well-known to deny, at least openly.  While it may be argued that the prosecution can make a prima facie case and the burden shifts, this is particularly true in civil proceedings, that is not the case here.

The prosecution cannot make a prima facie case with, “I’m not prepared to answer that right now.”  A prima facie case is not made by citing court opinions and argument, it’s made with evidence, a factual and logical basis to support the claim being made.

I’ve addressed at length many times the false claim that evidence is not needed to prove a written instrument applies and creates obligations; suffice to say arguing without evidence is misconduct and unfair.  When a factually unsupported claim is made and treated as irrefutable, then that’s proof of a rigged game.  This is also considered a serious due process violation.

What a pernicious tactic this is, think about it.  What they are saying is:

Evidence is not needed to prove it’s true, only if you want to disprove it.  And that is a big reason such people need a prison system. 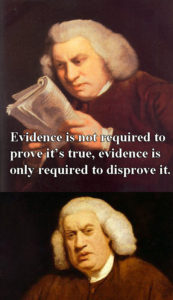 A prosecutor is claiming he has no burden to prove the foundation of his case, the foundation setting the relevance of everything else he presents.  He goes a step further claiming he can argue without evidence but we need evidence to disprove his argument.  This sounds like another very common fallacy, the double standard. 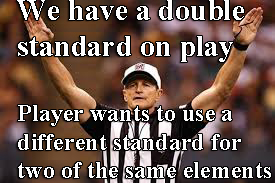 And you can be certain that no judge or bureaucrat is going to extend you the same courtesy and accept your factually unsupported arguments.  No, that is reserved for criminals called “government”.

So when you encounter these dishonest tactics, call them on it, in court object, and make it impossible for them to make what they are doing look good.  That is why in court they tend to yell and threaten us, and out of court they just hang up.

Stick to asking questions.  They claim to be fair, yet use unfair tactics and we need to ask effective questions to bring out the contradictions.