“If you don’t teach them, how will they ever learn?”

“If you give them freedom, how will they gain discipline?”

“Without schooling, won’t they just do nothing all day?”

These questions are only a sampling of the typical unschooler’s interrogation. I get it. Unschooling challenges everything we have been taught about learning, knowing, and growing.

At a friend’s birthday party this weekend, the topic of unschooling came up. After I had explained, thoroughly I thought, that we don’t replicate school-at-home, that we learn in and from our daily life in the city, that the children’s interests guide their learning, that we live as if school doesn’t exist, the person paused and asked: “So do you give them exams?”

The conversation was all the more poignant given the martial arts tournament Molly competed in earlier that day. During a walk around the city last fall, we passed a newly opened martial arts school. Molly was intrigued. She walked in, made an appointment for a trial class, and was instantly captivated. Since then, she spends three afternoons a week at martial arts classes. Her enthusiasm spread to her younger sister, and now Abby joins her for classes. 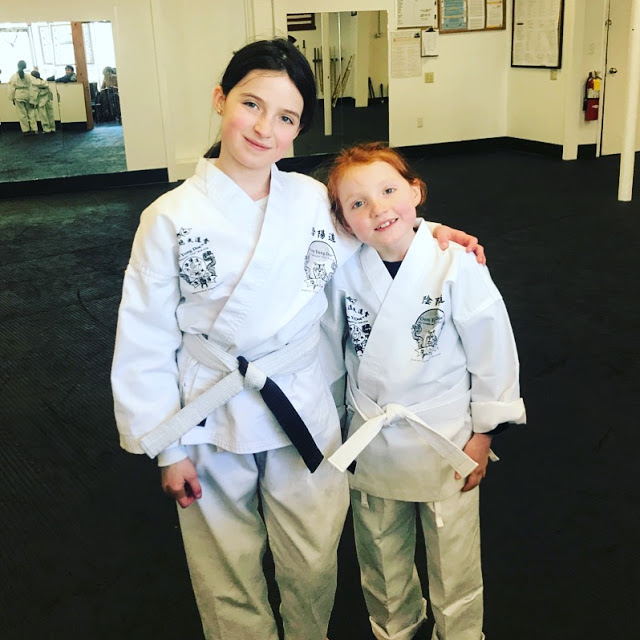 If you are unfamiliar with martial arts, as I was, it is a very disciplined, physically and mentally demanding activity. Respect, for oneself and others, is paramount. The training is rigorous and regimented. The focus is on control of one’s mind and movements. It is not a sport for slackers.

I have since discovered that many unschoolers gravitate toward martial arts. I am not surprised. Unschooling epitomizes self-discipline and self-direction: key qualities of martial arts training.

Unschooling may, at first glance, seem like a rejection of formal instruction and rigorous training. The reality is that unschoolers often choose very formal instruction and very rigorous training. The key word, though, is choose. They choose–based on their own interests–what to learn, when, how, and from whom. When they find something they are interested in, unschoolers often immerse themselves in it wholeheartedly. They commit to rigor and regimentation when it matters to them. Choosing to join the military and endure boot camp training is quite different from being drafted. Freedom is the opposite of coercion.

While Molly competed in her first martial arts tournament this weekend, I was struck by its tone and structure. Dozens of students, of all different skill levels, ranging from age six to over 70, competed before an awestruck audience. Sprinkled between their individual performances were master-level demonstrations of the highest skills in eight martial arts. Observing a highly diverse group of people of all ages and stages gathering together in pursuit of a common interest, with only themselves to compete against, was truly inspirational. It’s rare to see such intergenerational collaboration and respect.

Unschoolers unapologetically reject coercion, choosing freedom over force in learning and in living. Freedom comes with responsibility. When children are given freedom and opportunity, they will take responsibility for their own education and become astonishingly self-disciplined. They will immerse themselves in meaningful passions and commit to mastery of skills and content with unimaginable enthusiasm and grit.

So, no, we don’t give our kids exams. But that does not mean they are not tested.