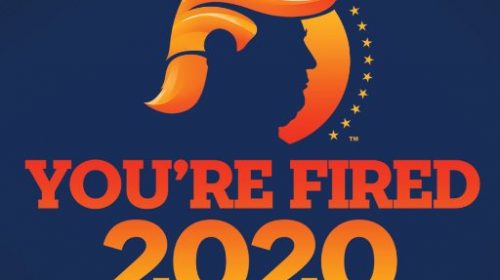 Firing a worker is usually a serious harm.  Sometimes it’s devastating.  But we can still wonder, “Is firing someone morally wrong – and if so, how morally wrong?”

If this puzzles you, ponder this: Ending a romantic relationship, too, is usually a serious harm.  Sometimes that, too, is devastating.  Yet few moderns attach much moral blame to someone who dumps their romantic partner.  Even if you’re married, we rarely claim anything like, “If you break up, your ex-partner will wallow in misery for years, so you have a moral obligation to stay.”  (Close family members might privately maintain otherwise if you have kids together, but even then…)

In my view, firing is morally comparable to ending a romantic relationship.  In the absence of a formal agreement to the contrary, both kinds of relationships are – and should be – “at will.”  Yes, informed observers might have some grounds to morally criticize the termination.  Ultimately, however, close relationships – whether professional or personal – are complicated, riddled with misunderstandings.  Hence, outsiders should not only affirm that people have a right to unilaterally break up; they should practice the virtue of the tolerance by remaining impartial in thought as well as in action.

To repeat, that’s my view.  The normal view, in contrast, is that romantic and professional relationships should be governed by diametrically opposed standards.  In matters of love, the heart wants what the heart wants.  On the job, in contrast, governments should protect workers from employer abuse.  And even if the law says otherwise, firing someone who’s performing their job adequately is morally suspect.

While this “normal view” is now widely-shared, it’s still closely associated with the left.  Back when “freedom of contract” had more appeal, the left strongly argued that employers’ “freedom to fire” was tantamount to “the freedom to oppress workers.”  Back in high school, my social science teachers often philosophized, “Sure, physical coercion is bad; but so is economic coercion.  If your employer can fire you whenever he likes, you’re not free.”  This outlook naturally inspired the left to advocate a wide range of employment regulations, especially anti-firing rules.  While most non-leftists also favor such regulation, the left has long been more intense about it.  Their attitude is more radical – and so are the regulations they seek.

Which makes sense.  If you earnestly believe that firing a worker is a kind of economic violence, you’re going to firmly support stringent legal scrutiny of this violence.

From this perspective, the rise of “cancel culture” is deeply surprising.  Over the last decade, many leftists have not just moderated their former stance against firing.  They have become enthusiastic advocates of firing people they dislike.  “He’s performing his job adequately, so you have no right to fire him” has strangely morphed into a right-wing view.  If you don’t believe me, just start making insensitive remarks about race, gender, and sexuality on social media and see how your career goes.  “I was perfectly civil at work; I only offended on my own time” is now a frail defense.  Even if your boss and co-workers adore you, plenty left-wing activists will still pressure them to sack you.

Again, I have no principled objection to firing workers for their political views.  Indeed, I’ve long defended the blacklist of Hollywood’s Communists; while I tolerate a wide range of opinion, totalitarians are beyond the pale.  While we have no right to jail them, they don’t belong in polite society.  But if, like most people, you embrace the view that firing a worker is “economic coercion,” the left’s newfound love of firing their enemies should disturb you.  Consider: Their revised stance amounts to something like, “Firing a worker who’s performing his job adequately is a form of violence.  And if anyone crosses us, we advocate – nay, demand! – that this violence be done.”

To be fair, many leftists have yet to revise their stance.  Perhaps because they’re afraid of experiencing economic violence at the hands of the many other leftists who have. 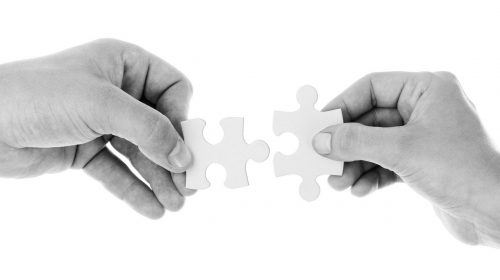 When considering a way forward, the discussion initially seems to be complicated because there are a lot of things that have gone wrong in the aftermath of George Floyd’s tragic death.

And that is the tendency to reduce discussions about race and riots to the same old “Left vs. Right” talking points.

Not only is this also wrong, but it’s a form of being wrong that condemns us to a cycle of repeating our past mistakes.

If our underlying framework for discussing solutions is wrong, then everything that follows will be wrong as well.

We don’t need to pretend that the battle between Left vs. Right is unreal or unimportant, but we do need to remember that this battle is a manifestation of a broader and more fundamental battle between Freedom versus Force, Creativity versus Coercion, and Central Planning versus Voluntary Markets that allow all individuals to opt-in and opt-out of services based on their basic human right to decide for themselves what their preferences and priorities should be.

As everyone searches frantically for a specific group or political figure to blame, lovers of liberty are being presented with an opportunity to take the conversation beyond the familiar mudslinging at personalities and parties.

The message here is apropos for our times:

If the incentives of a system are bad, even the work of those who mean well is compromised.

If the incentives of a system are good, we don’t have to place so much faith in our ability to always see things the same way.

The way we’re going to move forward in this world is not by finding a person who’s good enough to make bad systems work, but by investing in systems that incentivize even the bad people to make themselves accountable to creating value for others. And we know of no other system like that than the free market.

The world is more ready than ever to hear from voices who are willing to show them something that offers meaning, healing, and hope in times of conflict and crisis.

There is no better time for us to show those who are hurting how much the free market creates and delivers even when their enemies condemn and disagree. 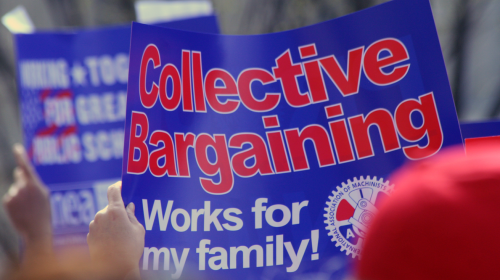 There’s nothing wrong with collective bargaining from the voluntaryist perspective. Where labor unions go wrong is in their use of coercion. When collective bargaining breaks down and employers wish to hire competing labor, that is well within their liberty to do so. When labor unions employ threats and violence against so-called “scabs” (those who break away from the union or come from outside the union to work), they are engaging in criminal behavior. When governments protect unions from liability for this, they are aiding and abetting criminals. (But what’s new?) Nobody has the right to use coercion against their competition, not businesses and not workers. If you can’t collective bargain without coercion, then you aren’t collective bargaining. You’re bullying, and you’re a criminal. And that’s today’s two cents.

Episode 309 has Skyler giving his commentary on the following aphorisms written by Jakub Bożydar Wiśniewski: “A bad economist believes that he knows what to do to make the world prosperous. A good economist believes that he knows what to do to let the world make itself prosperous.”; “A barbarian believes in coercion as a means to establish cooperation. A civilized person believes in cooperation as a means to eliminate coercion.”; “A civilized person believes that what matters is not whether wealth is equally distributed, but whether it is justly acquired. A barbarian believes that the latter depends on the former.”; “Achieving peace of mind is the dual process of maximizing self-awareness and minimizing self-consciousness.”; “A commercial culture is a tautology. A political culture is an oxymoron.”; and “A civilized person uses reason to evaluate his instincts. A barbarian uses reason to justify his instincts.” (Please excuse the audio anomalies that occur a few times throughout.) 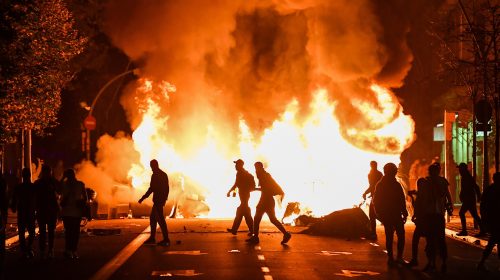 One of the many foundational reasons for the strong possibility of police brutality is the fact that people have either willingly or under coercion outsourced their own security to a group of people who claim not to have any duty to provide it. In actuality, security is the prerogative of each and every individual, not some legal mafia who are more interested in enforcing their prohibitions over peaceful and nonviolent activities in order to fill their bank accounts. The sooner society realizes this, the sooner it will do something to curtail, among other things, the possibility of riotous looting as a result of police brutality. And that’s today’s two cents. 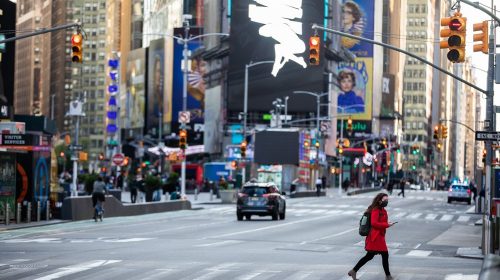 How much do lockdowns really matter?  Researchers recently noticed that behavior drastically changed before regulations did.  Malone and Bourassa offer a provocative comparison in 538:

This sort of mass behavioral change in such a short time is significant. It took over 50 years and hundreds of billions of dollars in prevention efforts to lower the percentage of people who smoke in the U.S. from 42 percent in 1965 to 13 percent in 2018. Americans reacted to the threat of COVID-19 in a relative blink of an eye.

A reasonable point, but multiple caveats are in order.

1. Lockdowns can easily prolong behavior they did not initially cause.  If the government stopped discouraging smoking, few people think it would mount a major resurgence in a year or a decade.  But almost everyone thinks that people would start returning to normal life in a few months… unless draconian enforcement stops them.

3. The welfare cost of prohibition is much greater than the welfare cost of large behavior changes.  Why?  Because the suppliers and demanders most reluctant to change their behavior have the highest consumer and producer surplus!  Thus, if only 20% of people would eat in restaurants if it were legal, the value of those few meals could easily be half the value in the market.  Check out this textbook graph: The triangle between the red “tax wedge” bar and the intersection of supply and demand shows the welfare loss of shrinking the market.  Double the quantity reduction, and you multiply the welfare loss four-fold.  In the real world, of course, the curves are rarely straight lines; instead, enthusiasts’ consumer surplus normally soars into the stratosphere.

4. The massive expansion of unemployment benefits and coverage greatly increases the sustainability of the lockdown; new limits on evictions and foreclosures do the same.  So if the question is, “How much do emergency policies matter?” rather than “How much do lockdowns matter?” there can be little doubt that the answer is “a lot.”  Most people simply don’t have enough personal savings to stop working for months without massive help from the government.  And even many people who do have such savings wouldn’t want to burn through their assets for a marginal increase in safety.

What this means is that crisis policies make a big difference – for good or ill.  People are taking many precautions voluntarily; but many other behavioral changes hinge on coercion and subsidies, especially after a few weeks of going corona-crazy.