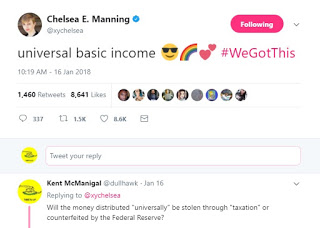 I opposed Manning’s unjust imprisonment for exposing the evil crimes of others.

I cheered Chelsea’s release from prison.

But I can’t support Manning’s entrance into politics– for more than one reason. First of all, she is advocating “universal basic income”. I asked her whether the money to be distributed will be stolen through “taxation” or be counterfeited and she didn’t respond. (I did get one response from a guy who posted that I was “too stupid to understand taxation”.)

But, anyway, it appears Manning is just another statist. Happy to use the state to violate individual rights, as long as she doesn’t feel it is her rights being violated at the moment.

Nope. My support ends here. Sorry, Chelsea, you’ve stabbed an awful lot of your supporters in the back with this move.

Kent you wrote that “pretending that reality is something other than it is probably isn’t healthy”. You referred to Manning as “she”. By doing so you are ignoring reality because despite the fact that Manning has decided to pretend that he is a woman and changed his name to Chelsea does not change the reality that he is a man. Biologically what defines a person as a male is the fact that they have an x chromosome paired with a y chromosome. Until it is possible to change a y chromosome to an x chromosome the REALITY is that one’s… Read more »

Yes, I agree. I was being “nice”. I’ve written before that I don’t believe people can choose the gender identity that they want, because biology is biology. (I was scolded severely*, but I stand by it) And, you can bet that if Manning demanded I use feminine pronouns when referring to Manning, I would only use masculine pronouns– because I don’t like being ordered. But when being “nice” in the absence of coercion I’ll probably refer to the person by the pronoun (as long as it isn’t some made up non-word) they would like.

Non-Cooperation as a One-on-One Strategy
When Probable Cause Fails, Leading to Assault by Cops
Rulers and Leaders
Suppressing Insane Ideas Doesn’t Stop Insane Conduct
Florida: So Much for “Parental Rights”
Censorship Not The Answer to Evil
Be Cure to Government’s Disease
Envisioning a Utopian Anarchism
Misinformation About Misinformation
Of Car Keys and “Gun Control”