Congrats to Lorenzo for defending himself against the predators in Florida and getting a dismissal.  While there is no direct evidence the failure of the judge and prosecutor to respond in eight months to the motion to dismiss and discovery request led to the dismissal, I don’t think we can totally discount that. 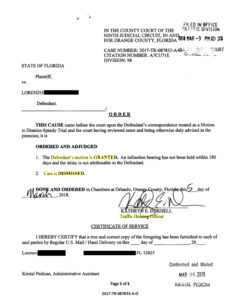 The direct evidence only proves the complaint was dismissed because there was no trial within the required 180 days.  But, there is still the question of why there was no trial.  The motion to dismiss is based on a lack of evidence proving personal and subject matter jurisdiction.  The discovery request only sought such evidence and witness with personal knowledge.

If the prosecution could meet their burden, they would just provide the evidence, even if to lie saying jurisdiction is a trial issue only.  Looks like they ran the clock to avoid the issue completely.

War is the Crime; Its Perpetrators Seldom Face Justice
Musk May Help End Liberal Narrative
My Guidelines for Government
Institutions
‘Law’ Always Benefits The Elites
Healthcare in a Free Society is Not an Insurmountable Problem
Neighborhood Auto Shops Can Make a Lot of Money
“Privacy”: Some Animals Are More Equal Than Others
Liberty is The Only Reason You Need to Own Firearms
Your Flight Is Delayed; Thank the Feds