I don’t believe in the legitimacy of “driver’s licenses“, but I have been helping someone, at their request, try to obtain one. For “pragmatic” reasons. Therefore my patience with the nonsense is a bit thin already.

Living where I do, the closest DMV office is in another town, about 20 or 30 miles away. The hours are inconvenient and subject to the whims of the office’s lone surly bureau-rat.

An appointment was set to take the driving part of the test. The “new” driver (who has actually been driving for decades, but wants to get “legal”) arranged to borrow a car for the test, because my old pickup is “too large” and unwieldy. The owner of that car met us at the DMV, after driving an hour out of his way to get there.

Things were set. We left the new driver and the car at the DMV and went to McDonald’s to wait. Then I remembered I have no cell phone service in this town. Oops.

When we thought enough time had passed, we went back to the DMV. We were then confronted with bureaucratic evil and stupidity. The license-seeker had been trying to call me for almost the entire time, without success–no cell signal.

Turned out the bureau-rat wouldn’t administer the test because of a burned out light bulb. An inconsequential light bulb. Which the license-seeker isn’t even responsible for.

The brake light in the top of the rear window has 4 bulbs. The one second to the end on the right was out. This third–extra—brake light was still perfectly functional without this bulb. The light bar was still perfectly visible from a distance–and in fact you had to be close to notice the small gap in the rectangle of light. But “No test for you!!”

So, everyone had to be inconvenienced again, just because of the arbitrary whims of a tax junkie. Hooray.

The bulb was replaced, the test was rescheduled, and passed with no further trouble.

And, as it turns out, that particular light isn’t even a required part of the car checklist, as you can see below from the scan of the actual checklist: 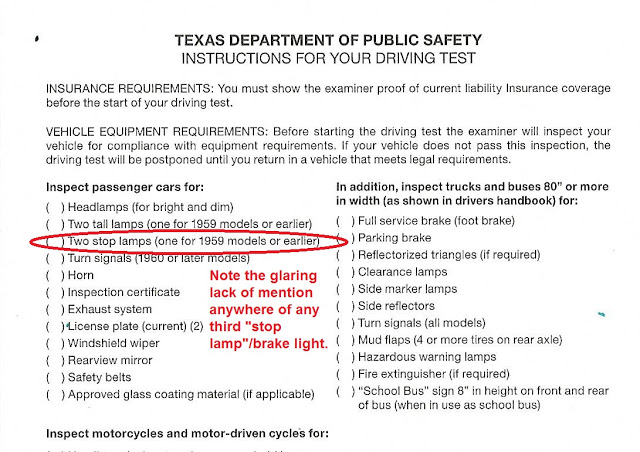 The BureauHarpy simply wasn’t in the mood to give a test that day, and lied to get out of it. I expect nothing better from people of that sort–it’s government.

I was reminded again of the time I decided I ought to get “legal” and get a driver’s license for the state I had been living in. I went in, but I didn’t have all the demanded papers and documentation (or even a “legal address” for that matter), and they wouldn’t give me a license. So I walked out, loudly proclaiming to the shocked faces on the waiting victims of bureaucracy: “Then I’ll just keep driving illegally. Doesn’t matter to me. Bye.” And I did. And it saved me tons of money over the years, even including the “fines” when I eventually got caught (years later, in an altogether different state).

Ah, the joys of statism. How can people even twist their minds enough to believe this stuff is legitimate?