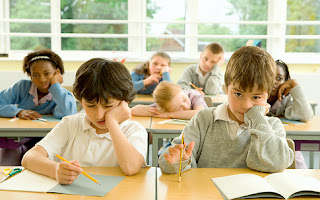 Almost every child, on the first day he sets foot in a school building, is smarter, more curious, less afraid of what he doesn’t know, better at finding and figuring things out, and more confident, resourceful, persistent and independent than he will ever be again in his schooling – or, unless he is very unusual and very lucky, for the rest of his life. Already, by paying close attention to and interacting with the world and people around him, and without any school-type formal instruction, he has done a task far more difficult, complicated and abstract than anything he will be asked to do in school, or than any of his teachers has done for years. He has solved the mystery of language. He has discovered it – babies don’t even know that language exists – and he has found out how it works and learned to use it. He has done it by exploring, by experimenting, by developing his own model of the grammar of language, by trying it out and seeing whether it works, by gradually changing it and refining it until it does work. And while he has been doing this, he has been learning other things as well, including many of the “concepts” that the schools think only they can teach him, and many that are more complicated than the ones they do try to teach him.
Read the full thing »

Vernal Equinox
Boston College Psychology Professor: “School Has Become a Toxic Place for Children"
Govern Yourself So You Violate No One Else
Be Cure to Government’s Disease
The Ironclad Argument Against Racism
Misinformation About Misinformation
Fossil Fuels Save Lives
Why Elon Musk Shouldn’t Buy Twitter
Yes, Corporations Have Free Speech Rights Like Individuals
The State Took Her Home Because She Missed $900 in Property Taxes