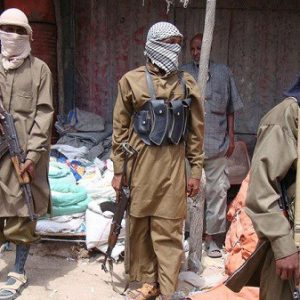 Armed Al-Shabaab fighters patrol Bakara Market, in Mogadishu, Somalia, Monday, June 29, 2009. Somali radical Islamic insurgent says weapons and ammunition the United States recently supplied to Somalia’s embattled government will only increase violence in the war-wracked country. Sheik Hassan Ya’qub, a spokesman for the militant group al-Shabab in the port town of Kismayo, was responding to an announcement by U.S. officials last week that the Obama administration had supplied arms and provided military training worth just under $10 million to the shaky official government. (AP Photo/Farah Abdi Warsameh))

Don’t Make Enemies over Politics
The US “Intelligence Community” Can’t Be Trusted to Police Itself
Are Bosses like Rulers?
Swapping Politicians Pointless Change
The Scourge of Conscription
Capital Punishment Places Too Much Trust In An Untrustworthy Institution
Promises of Politicians Impossible
Note to SCOTUS: Section 230 is an Acknowledgement of Reality, Not a “Liability Shield”
Please Don’t Go
Acrostic on Excerpt about Time