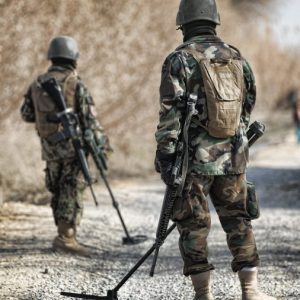 A significant offensive operation, which takes the independence and self-sufficiency of British-trained Afghan forces to a new level, has begun in central Helmand.

As the new year was seen in around the world, Afghan troops were opening a new chapter which sets the scene for their future autonomy and long-term role in the defence of their nation against extremism and terror.

Operation OMID PANJ (‘Hope Five’ in English) follows on from the successful Operation OMID CHAR which, at the time, was the largest operation in size, number of soldiers and duration to have been planned, led and conducted by the Afghan National Army.

But OMID PANJ takes things a step further, with the Afghans relying on even less support from British troops, who are present only in a supporting role. One of the key areas where significant development of Afghan capability is being demonstrated is their growing ability to find and render safe improvised explosive devices, the indiscriminate weapon of choice for the insurgency.

Being conducted in the Green Zone, north of the Helmand River, the operation is pushing the Afghan governmentÕs influence and security bubble further out. By the time of its conclusion, it will see a new patrol base established east of Gereshk between the River Helmand and the Bandi Barq Road. This rural area, filled with irrigation ditches, canals and small farm plots, interspersed with residential compounds, has suffered from significant insurgent intimidation due to its proximity to smuggling routes into Gereshk city.