“When police found a kindergarten boy who had walked off from school after attacking his teacher and classmates,” Elizabeth K. Anthony writes at The Conversation, “it didn’t take them long to start guessing about the cause of his behavior.”

Long story short: The cops concluded  the boy wasn’t getting enough of That Good Old Corporal Punishment at home, and told his mother exactly that.

“He’s bad because no one’s correcting it.”

“This is why people need to beat their kids.”

“As law enforcement officers  … we applaud the fact that you will please beat your kid.”

There are no happy endings to such incidents, but this case did result in a hefty settlement after a judge ruled that the police behavior involved was “assaultive in nature.”

For much of my own life, I assumed that “spare the rod, spoil the child” was not only how things were, but the only way they could be. My wife and I debated that belief in a spirited manner and she largely prevailed in banning corporal punishment for our kids. I learned to keep my opinion (or at least my hands) to myself. But I never questioned it.

Then I inherited the razor strop.

I assume my grandfather and his father used the strop for its intended purpose, sharpening the straight razor which I also inherited. And, yes, maybe for other things.

My dad didn’t need the razor or strop for shaving — disposable razors were fine with him.  But he used that strop liberally, on me, when my behavior didn’t measure up to his standards.

It’s just a strip of leather, backed by a strip of thick cloth, maybe two feet long and four inches wide. But in memory,  it’s a giant serpent of fire and pain that I lived in abject terror of throughout my childhood.

Was my father an evil man? I don’t think so.

On the other hand, 40 years or more after my final disciplinary encounter with the strop, I’m no longer convinced that his decision to inflict pain on me is the reason I’m not dead, in prison, or an alcoholic.

If the strop taught me anything, it was the false lesson that instant resort to violence “works.” I suspect I’m not dead, in prison, or an alcoholic in spite of, not because of, the strop.

I also suspect that violent punishment of children makes those children, and their parents, more inclined to non-defensive violence in general.

Corporal punishment becomes a shortcut that superficially “solves” problems without the time and effort required to understand and work through those problems for real. It’s the crack cocaine of dispute resolution — an instant high followed by the constant need for more.

If you’re a good person with good kids — and I bet you are — don’t make it harder on them, or on yourself. Parent peacefully.

Tom has worked in journalism — sometimes as an amateur, sometimes professionally — for more than 35 years and has been a full-time libertarian writer, editor, and publisher since 2000. He’s the former managing editor of the Henry Hazlitt Foundation, the publisher of Rational Review News Digest (2003-present), former media coordinator and senior news analyst at the Center for a Stateless Society (2009-2015) and also works at Antiwar.com. He lives in north central Florida.

“Statist begins at home.” PARENT EFFECTIVENESS TRAINING (P.E.T.) ONLINE ON DEMAND RAISE DISOBEDIENT, AUTONOMOUS, PEACEFUL ADULTS Neither Permissive nor Authoritarian but Responsibly Free Stay Home & Learn on Interactive Zoom with Workbooks This online P.E.T. course is provided “On Demand”, that is, when enough (4+) parents want to take it. I usually schedule the eight 2- to-3 hour sessions weekly on consecutive Saturdays at whatever New Zealand time is most convenient for all. The eight sessions thus run over eight weeks for a total of around 20 hours. The cost is $50NZD (single or couple) and includes 2 workbooks, the… Read more » 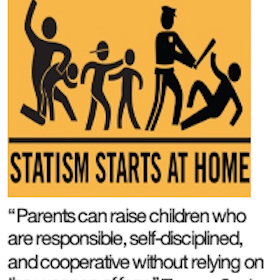 Why I Like Beatniks More Than Hippies
The Case for Legalizing Sex Work
More Young Americans are Using Cannabis and Hallucinogens; That’s Good News
School is for Wasting Time and Money
Decide What’s Most Important To You
The Soviet Dictionary on “Socialism” and “Capitalism”
Imperial Delusion is the Enemy of Peace and Prosperity
Political Atheism vs. Libertarianism
Does Private Property Amount to “Enslavement by Proxy”?
Don’t Wait: Get Into the Encryption Habit Now