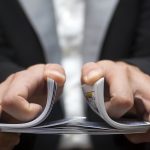 Magicians work in the art of deception. Their goal is to make you believe something is happening that isn’t happening. The reason this works for most people is the assumption that people approach viewing a magic trick with, that assumption being that what they’re doing is actually magic. Of course, everyone knows that it’s not actual magic, but the fun in magic is in being deceived, so people intentionally embrace this faulty assumption in order to be amazed.

If you approach a magic trick from the assumption that there is no magic, then your perspective of the trick changes and more often than not the deception becomes readily obvious. Rather than being a mystical art of unknown power, it becomes a puzzle to be solved, and you begin to see the misleading movements and the subtle slight of hand that compose the trick, rather than only the finishing prestige designed to leave you in wonder.

The same applies to the idea of the state. Politicians also work in the realm of deception, but theirs is a more nefarious kind. They seek to deceive you to gain power over you and control you, but the principle of assumption and bias is the same principle they operate from. They count on this assumption to keep you deceived.

The assumption of authority makes the “magic” of politicians seem amazing to the observer. They’re able to convince you that things you would normally find reprehensible and awful, normal and necessary. They put an exception in your mind for all the things they can do without consequence, but you can’t. They make you trust them and ignore their faults, because they are the authority.

However, as soon as you view the politician from the assumption that there is no authority, the deception becomes readily obvious. The horror of their actions becomes readily available and the truth becomes clear that they are just people, like you and I, with no special exceptions or privileges other than those built by your assumption of authority.

While we engage in the deception of magic tricks willingly and happily for the sake of entertainment, doing so in the magic show of the state is not only dangerous to ourselves, but to everyone else that is forced into submission to that authority. While one may be a whimsical escape from reality, the other is the source of unspeakable horror and oppression, all for a deception, built on belief in a myth.

This is no more important than now, as our fears and divisions are constantly prayed upon by those that seek power over you. They take the illusory system that has been built, the system of authority, and they manipulate it to their ends, relying on your assumptions and your belief. It’s time to step back and change the assumption, recognize the truth, and reveal the trick for what it is.