First, he supposedly showed that most Americans would shock a total stranger to death because an authority told them to do so.

Second, his experiment was widely perceived as emotionally abusive – so widely, in fact, that Milgram inspired the strict rules that now govern human experimentation.  These rules are allegedly so strict that Milgram’s experiment can never be replicated.

It’s an odd situation: one of the most famous psychological experiments – an experiment that changed the way people think about human nature – effectively prevented itself from ever being doubly-checked.

Recently, though, I was surprised to discover that Milgram’s famous experiment was re-done in 2009!  How is this even possible given modern regulations?  Experimenter Jerry Berger explains his approach in American Psychologist:

The author conducted a partial replication of Stanley Milgram’s (1963, 1965, 1974) obedience studies that allowed for useful comparisons with the original investigations while protecting the well-being of participants. Seventy adults participated in a replication of Milgram’s Experiment 5 up to the point at which they first heard the learner’s verbal protest (150 volts). Because 79% of Milgram’s participants who went past this point continued to the end of the shock generator’s range, reasonable estimates could be made about what the present participants would have done if allowed to continue.

In other words, since the vast majority of people willing to shock a protesting confederate are also willing to shock an unconscious confederate to death, there’s no need to actually continue to the final, gruesome level.  You can run almost all of the experiment without ever bringing the subjects face-to-face with their own extreme moral turpitude.*  Berger continues:

I took several additional steps to ensure the welfare of participants. First, I used a two-step screening process for potential participants to exclude any individual who might have a negative reaction to the experience. Second, participants were told at least three times (twice in writing) that they could withdraw from the study at any time and still receive their $50 for participation. Third, like Milgram, I had the experimenter administer a sample shock to the participants (with their consent) so they could see that the generator was real and could obtain some idea of what the shock felt like. However, a very mild 15-volt shock was administered rather than the 45-volt shock Milgram gave his participants. Fourth, I allowed virtually no time to elapse between ending the session and informing participants that the learner had received no shocks. Within a few seconds of the study’s end, the learner entered the room to reassure the participant that he was fine. Fifth, the experimenter who ran the study also was a clinical psychologist who was instructed to end the study immediately if he saw any signs of excessive stress. In short, I wanted to take every reasonable measure to ensure that the participants were treated in a humane and ethical manner.

This meticulous design won Berger a green light from human subjects review.  So what did he discover?  Milgram replicates nicely:

The percentage of participants who continued the procedure after pressing the 150-volt switch was examined. As shown in Table 2, 70% of the base condition participants continued with the next item on the test and had to be stopped by the experimenter. This rate is slightly lower than the percentage who continued beyond this point in Milgram’s comparable condition (82.5%), although the difference fell short of statistical significance…

How Berger and Milgram’s results compare: 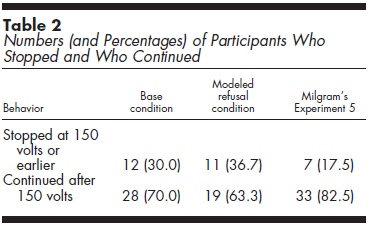 Can we properly rely on the truncated version of the experiment?  Yes.

I cannot say with absolute certainty that the present participants would have continued to the end of the shock generator’s range at a rate similar to Milgram’s participants. Only a full replication of Milgram’s procedure can provide such an unequivocal conclusion. However, numerous studies have demonstrated the effect of incrementally larger requests. That research supports the assumption that most of the participants who continued past the 150-volt point would likely have continued to the 450-volt switch. Consistency needs and self-perception processes make it unlikely that many participants would have suddenly changed their behavior when progressing through each small step.

seeing another person refuse to continue. In novel situations such as Milgram’s obedience procedure, individuals most likely search for information about how they are supposed to act. In the base condition, the participants could rely only on the experimenter’s behavior to determine whether continuing the procedure was appropriate. However, in the modeled refusal condition, participants saw not only that discontinuing was the option selected by the one person they witnessed but that refusing to go on did not appear to result in negative consequences. Although a sample of one provides limited norm information, it is not uncommon for people to rely on single examples when drawing inferences. Nonetheless, seeing another person model refusal had no apparent effect on obedience levels in the present study.

I’m glad to see prominent psych experiments face the harsh test of replication.  But the same biases that lead to the over-publication of shaky results (positive findings are more exciting than negative findings) also lead to one-sided publicity for failed replication attempts (debunking is more exciting than confirmation).  When you first hear about Milgram’s original findings, most of us are incredulous.  But in the end, it looks like Milgram was correct.  With a little high-status prodding, the typical person is ready and willing – though not eager – to do great evil.

* Berger also approvingly cites Milgram’s defense of his original design: “In his defense, Milgram (1974) pointed to follow-up questionnaire data indicating that the vast majority of participants not only were glad they had participated in the study but said they had learned something important from their participation and believed that psychologists should conduct more studies of this type in the future.”