With Memorial Day Weekend here, many Americans have hit the road early to avoid traffic to their favorite holiday destinations, or catch a Thursday flight to make a weekend stay at Grandma’s less rushed. For some German families, who celebrated a three-day weekend last week, taking their kids out of school to get a jumpstart on the holiday ended with police airport interrogations and looming fines.

As NPR reported on Monday:

German parents are getting busted for taking their kids on vacation when they should be in school. Police have launched investigations into more than 20 families that were caught playing hooky ahead of a three-day weekend that started on May 19, German newsmagazine Der Spiegel reported…According to the paper, 11 families that opted for an early holiday departure were caught in Nuremberg while 10 were interrogated in Memmingen.”

In Germany, children ages 6 to 16 must be in school during the week. In an effort to stop parents from giving their kids an extra day off for a holiday weekend, German authorities are using police force to uphold strict compulsory schooling laws. Homeschooling is illegal in Germany, and this latest incident of state power reveals a steady weakening of parental rights in that country.

In 2014, the Romeike case made international headlines, as the German Christian homeschooling family fled their home country in 2008 to seek asylum in the United States. In Germany, they faced fines and the possibility of losing custody of their children for choosing to homeschool them. When they settled in Tennessee, a district judge granted the family asylum on the grounds that they were facing persecution in Germany for their religious beliefs.

That decision was challenged and overturned by the Obama administration on appeal, which argued that Germany’s home schooling ban did not constitute religious persecution and could not be used as a basis for asylum in the United States.”

The case made it all the way to the Supreme Court, who declined to hear it. In an 11th hour turn of events, the Department of Homeland Security allowed the family to remain in the country indefinitely, but asylum was never granted. The Romeikes expressed their gratitude: “We thank the American government for allowing us to stay here and to peacefully homeschool our children—it’s all we ever wanted.”

Go to School, Or Else

While homeschooling is legal in all 50 U.S. states, parental rights in America are precarious. It is unlikely you will get stopped today at the airport if you’re flying out early with your kids, but you could face other types of government sanctions. The German crackdown on truancy is not so far-fetched for Americans.

In 2015, Pennsylvania dad, Mike Rossi, qualified to run the Boston Marathon. He decided to take his kids out of school for a few days so that the whole family could enjoy an extended marathon weekend in Boston. Upon their return to Pennsylvania, Rossi and his wife received this letter from the principal of their children’s public school: 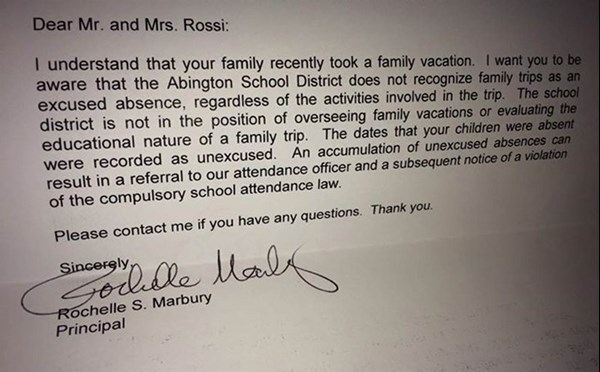 The American system of compulsory mass schooling was modeled after the schooling system in Prussia, or what is now modern-day Germany. The “father of American public education,” Horace Mann, and others were enchanted by the Prussian system of compulsory attendance, age-segregated classrooms, standardized teacher training, regimented curriculum, and the order and conformity that the system fostered. In 1852, Mann passed our nation’s first compulsory schooling statute in Massachusetts, replicating the Prussian model.

Perhaps it is time we stop copying the Prussians and instead create a truly American system of education that places families first.

My Guidelines for Government
‘Law’ Always Benefits The Elites
Healthcare in a Free Society is Not an Insurmountable Problem
Neighborhood Auto Shops Can Make a Lot of Money
“Privacy”: Some Animals Are More Equal Than Others
Liberty is The Only Reason You Need to Own Firearms
Destroy What You Know
Can Elon Musk Save Twitter?
Seats of State
Alito’s Challenge to Libertarians