Mammals are innately playful. Our large brains and complex social structures require that we learn vast amounts of information in childhood to help us thrive in adulthood. How do mammal children learn all of this?

But it’s not just any play. According to researchers, the most valuable play for normal human development is free, unstructured play. In a Scientific American article, scientists report that free play “is critical for becoming socially adept, coping with stress and building cognitive skills such as problem solving.”

Despite this alarming trend away from free play, most parents are not clamoring for its return. Despite these benefits, natural, free play – the kind most of us had as kids – is rapidly disappearing. According to a 2005 study in the Archives of Pediatrics & Adolescent Medicine, childhood free play declined by 25% between 1981 and 1997. The catalyst for this drop in free play, according to the study, was an increase in time children spent in structured activities.

Childhood play deprivation is not without consequences. Psychologist Peter Gray, who studies play and childhood development, writes that “over the past half century we have increasingly deprived children of opportunities for free play, and over that same period we have seen dramatic and continuous increases in all sorts of emotional disorders in children.”

Despite this alarming trend away from free play, most parents are not clamoring for its return. According to a newly released Gallup study, parents acknowledge that free play “fosters creativity and problem-solving,” but they do not prioritize these qualities.

In fact, the study found that “child-led, independent indoor play ranks near the bottom of the priority list for both children and parents.” Self-confidence, social skills, and academic skills were the top three priorities for parents with children ages 10 and younger. 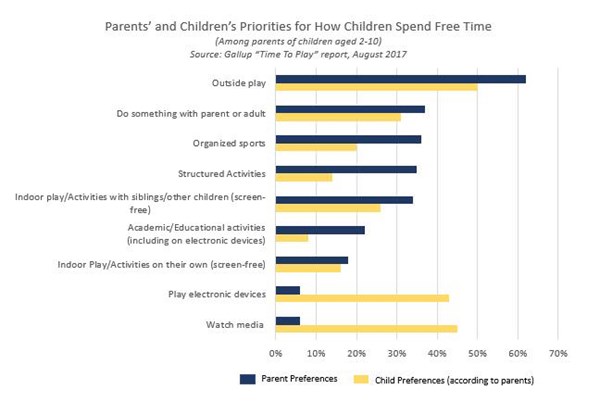 Parents in the Gallup study placed a high value on structured, purposeful play activities – such as organized sports and educational programming. In contrast, these parents reported that their children place a higher value on screen time – perhaps one of the few remaining outlets children have for unsupervised playtime.

The good news is that both parents and children in the study value outside play; but parents reported that weather (too cold, too hot, too rainy), and fear of sending children outside without adult supervision, were the top two barriers to more unstructured playtime outdoors.

As parents, we should fiercely protect and preserve our children’s free playtime.

The Gallup report concludes: “Many parents may not recognize the positive role that unstructured, child-led play can have on their children’s development, despite the scientific research linking this type of play to the development of problem-solving skills, social cooperation, resiliency and creativity.”

In the accelerating quest toward early academics, organized activities, and purposeful play, we may be losing sight of the innate and time-honored benefits of free, unstructured childhood play.

The mounting focus on childhood success and academic achievement at ever-earlier ages may result in children who are less creative, less collaborative, and less emotionally resilient than they were a generation ago. As parents, we should fiercely protect and preserve our children’s free playtime, prioritize unstructured, unsupervised play, and encourage them to go outside – even in the rain.

Non-Cooperation as a One-on-One Strategy
The State Took Her Home Because She Missed $900 in Property Taxes
Voting: Don’t Buy the Guilt Trips
No, Gas Prices Didn’t Spike Because of ‘Corporate Greed’
The Final Freedom
Heartless Immigration Restrictions Need Replacing
Mask Mandate – Liberty Can Hang on One Word
You Are Not a Slave, Act Like It
True Liberals Are Not Conservatives
Plagiarism