Back in July a Canadian prosecutor insisted we had to put our question of evidence in writing.  She refused to say she would be responsive, only that she should respond.  Not very professional in my opinion.

It took weeks to respond and another prosecutor with the Edmonton Depart. of Justice.  As you’ll see, the best this second attorney could do was evade the question by being non-responsive and using logical fallacies.  Let’s break this “response” down.

I did call this prosecutor up and he did not want to speak to me, he made an excuse about me not being a lawyer and hung up the phone.  My question is very easy to understand and is important to present first so we can see how the prosecutor was not responsive.  He responded, but was not responsive to the question.

Per your request on the phone today I’ve put my request in writing. I know you and the CRA believe that if I’m physically in Canada, then your constitution and laws apply and that is the basis of the government’s alleged jurisdiction over me. My question is: What evidence (specific facts) do you and the CRA rely on to prove your claim is true?

You were very resistant on the phone and would not confirm you would be responsive to my question, only that you would respond. Please be responsive and address this question of fact. It is not an argument, not an issue of law, I am not a sovereign citizen or freeman or any such type. Do not cite court opinions as opinions are not responsive, and at best an appeal to authority (please do not waste time citing the Meads case as that only dealt with issues of law). Do not give legal citations as they are non-responsive to a question of fact.

Also, please provide the names of any CRA employees you may rely on, and provide direct contact information.

What we got as an answer was this below: 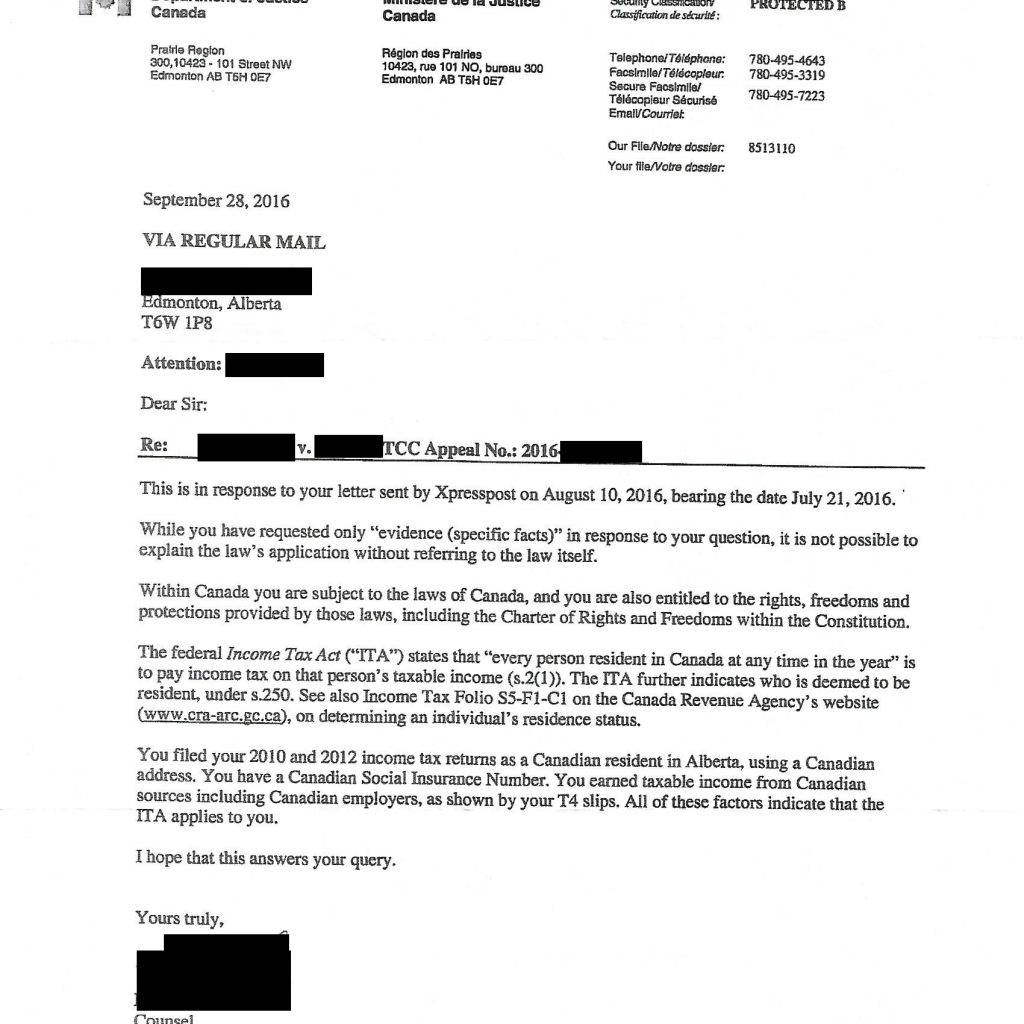 The prosecutor claims you can’t explain the law’s application without referring to the law itself.  This is another example of circular logic, the laws apply because they say so.

The second logical fallacy is proof by assertion.  All the prosecutor does is restate his claim, “Within Canada you are subject to the laws of Canada…”  We already know that’s your claim, just repeating it doesn’t make it true.

The rest of the sentence is merely a legal opinion and not evidence the constitution applies: “…and you are also entitled to the rights, freedoms and protections provided by those laws…”  The fact everyone in Canada is forced to pay taxes under threat of jail negates this legal opinion.

Despite only presenting a proof by assertion fallacy and a false legal claim, the prosecutor makes an unwarranted assumption  by citing the the tax code claiming it applies because:

The prosecutor just presumes his claim is true, not a single supporting fact is provided.  He then presents several things, some factual, some just opinions:

You filed your 2010 and 2012 income tax returns as a Canadian resident in Alberta, using a Canadian address.  You have a Canadian Social Insurance Number.  You earned taxable income from Canadian sources including Canadian employers, as shown by your T4 slips.  All of these factors indicate that the ITA applies to you.

Filing a tax return is compulsory, always done under threat of jail.  Forcing strangers to give you money under threat of punishment does not make written instruments apply to others and create obligations on them.  This alone negates the second part about the insurance number.  Also, how would getting the insurance number prove the constitution applied anyway?  That’s right, it doesn’t, it’s putting the cart before the horse.

I get money from people in Canada, does that prove the constitution applies to me?  No one I’ve spoken to in Canada with the CRA, DoJ, MP‘s and other government agents have been able to prove it.  Though some, including Robert Diab, a law professor, did admit there was no evidence, just “a blunt assertion of power.”

The prosecutor claims: “All of these factors indicate that the ITA applies to you.”  Except for his proof by assertion fallacy, he makes no attempt to use the return/Canada address/Canada source income to prove the constitution applies, he only refers to the ITA while assuming his claim about the constitution is true.

This prosecutor is defending the legal claims of unknown agents of the Canadian Revenue Agency.  He fails to disclose the name of his agents/witnesses; such disclosure is required by good faith, fairness and due process.  Is that a harmless oversight?  We won’t know until the prosecutor answers directly or is confronted about it in court.

We know they have no evidence, just blunt assertions of power covered up with logical fallacies.  So if you are defending yourself against them, it’s easy to discredit them.  Getting them to do the right thing and back off, that is much more difficult a task.

That thoroughly debunks this typical prosecutorial misconduct, it is certainly obstruction of justice.  Another prosecutor who failed to present evidence proving the constitution applies to us just because we’re physically in Canada.   But such failure has not stopped him from trying to destroy a peaceful man’s life.

If you think I’ve made an error in my analysis, or that you think the prosecutor was responsive and provided evidence a written instrument from 1867 applies to me or anyone else today, just because they are physically in Canada, then please present your proof.