Today I would like to say something about the value of enthusiasm and optimism, but the chances are high that you’ve already heard a million quotes about the virtues of whistling while you work or the value of doing everyday chores with a sense of pride.

Instead of giving you another quote about this topic, I’ll share an important distinction: Inspirational philosophy versus Inspired practice.

You’ve probably heard this distinction before too, but the chances of forgetting it are greater than ever before now that we have an unprecedented ability to shower the world with positive stories and sayings.

I’ll give you an example. While writing this post, I Googled “inspirational quotes” and here’s one of the first things that came up: 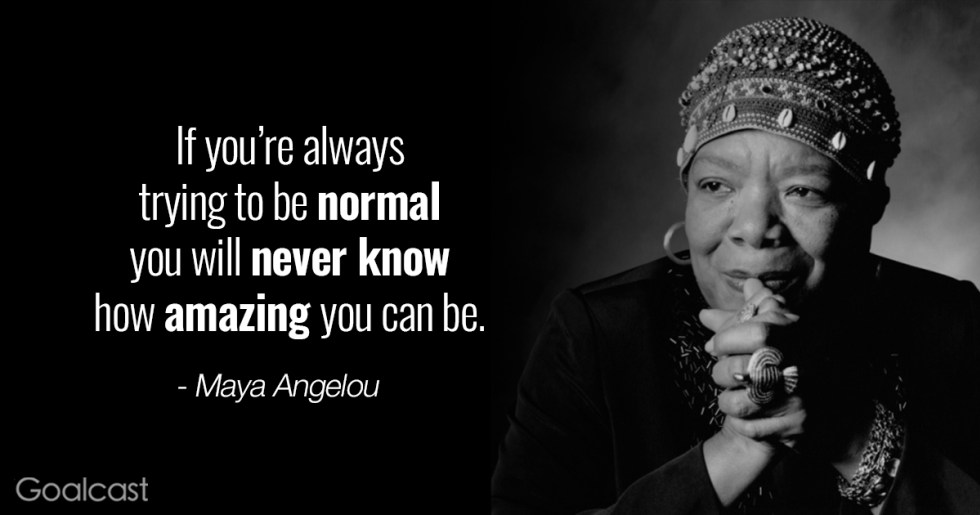 This is a quote from Maya Angelou that says “If you’re always trying to be normal, you will never know how amazing you can be.”

When you read that quote, did you think “When I take a walk this weekend, I’m going to really ponder that one. I’m going to identify my assumptions about what makes a person normal and then I’m going to honestly consider how much possibility I might be overlooking because of these assumptions”?

Or was your reaction more like “Sure, I agree with that. It’s common sense”?

I’m guessing that most people have the second kind of reaction.

When a profound concept first strikes human consciousness, it seems revolutionary. When that same concept gets repeated over and over again, it starts to sound redundant. As our ability to say “I’ve heard that before” increases, our ability to say “I need to spend some serious time thinking about that” decreases. There’s a quote for that too: “familiarity breeds contempt.” But I’m sure you’ve heard that one before. It’s hard to believe that you need to wrestle deeply with an idea if you’re constantly hearing about it in pop culture over and over again. Because of this constant exposure, we lose sight of the most important aspect of inspirational quotes: they are easier said than done and better done than said.

Everyone has seen a well-designed graphic telling them to live, love, and laugh, but fewer have seen the well-designed life of someone who finds a way to love and laugh through real problems faced in the real world.

I frequently hear people ask for advice on things like how to be a life coach, or how to be a motivational speaker, or how to make a living by being a force for inspiration.  If you’re one of those people, I have good news and bad news.

Here’s the bad news: We live in a world where it’s extremely difficult to be special if you want to share inspiring things.

I can’t even count the number of blogs, podcasts, TED Talks, seminars, books, and online courses promising you a thousand and one ways to hack your life, improve your health, increase your income, grow your audience, raise your level of consciousness, activate your chakras, accelerate your manifestations, and so on. Whatever you want to share has probably already be seen or heard a few dozen times this week alone.

So if you plan on getting into the “self-help business”, I offer the same advice I heard an old theater professor give to someone who said they wanted to be an actor: “If you have something else you can be happier doing, go do that instead. Don’t do this unless you know you can do it for fun. If you can show up and do this kind of work enthusiastically even if you never win an Oscar or get on the big screen, then you’ll always find a way to work and you’ll have a better chance of making a living if you’re lucky. But if you can’t devote yourself to this without a steady paycheck, find another career and do this for leisure when you have the time.”

The world probably won’t praise you if you share a tweet on enthusiasm, but the individuals who have to work with you every single day will appreciate it if you show up to your job like you actually want to be there. You probably won’t get a bunch of retweets for sharing that Steve Jobs quote about being a non-conformist, but you’ll break the status quo in half by acknowledging the people you see every day with dignity and empathy. You probably won’t have a crowd of fans demanding to hear your voice on the world’s most popular podcast, but there’s a crowded world out there of people who feel alone, afraid, and apathetic. Asking them how they’re doing and listening for two minutes would make you a rock star in their eyes.

George Washington Carver wrote, “when you do the common things in life in an uncommon way, you will command the attention of the world.”

If sharing inspirational material is more common than ever before, the way to do it in an uncommon way is by embodying inspiration as way of life.

You’ll command far more attention if you smile and say “hi” to only 1 out of every 5 people you see than if you share 1 positive quote for 5 days a week.

You’ll build a much more powerful network by being a team player at your day job than by sharing a dozen tweets about how to network.

I once received a promotion at a restaurant because every single day I would walk up to the bar and ask the bartenders if they had any trash they needed help throwing out. They almost always said “yes” because things were usually busier at the bar and having a full trash bin was nuisance. They praised my team spirit highly for this and it eventually led to a better position. This wasn’t part of my job description, but I did it because I wanted to help. I built a reputation as an inspiring co-worker not because I was trying to help people deal with their psychological garbage. I was just literally trying to help them deal with their physical garbage.

If you’re enlightened enough to be someone’s life coach, don’t just send them a pretty picture with a positive quote while you move on to the next life hack article. Help them chop wood and carry water. Be a decent human being towards them. Be a great person to work with. Be a great person to have around when there are boring but important things that need to be done. Be the kind of person who will help someone take out the garbage even if it’s not part of your job description.

That kind of thing is not as glamorous as being a celebrated coach, but it certainly builds the kind of character you’ll need if you ever plan on becoming one. And here’s the paradoxical thing: when you focus on inspiring people by inspiring yourself to serve them in whatever way you can, the character you develop will shine through your actions in a way that makes them pay attention to the inspirational stuff you want to share. And even if your words aren’t anything special, the energy behind them will be strong enough to reverberate.

Inspirational quotes are now commonplace and easy, but inspired living is still rare and difficult. If you want to be a self-help rock star, master the latter.

TK Coleman is the Education Director for Praxis. He has coached dozens of young people and top performers from all stages of life. He’s the author of hundreds of articles and is a frequent speaker on education, entrepreneurship, freedom, personal growth, and creativity. TK is a relentless learner, has been involved in numerous startups, and has professional experience ranging from the entertainment to financial services industries and academia. Above all else, TK is on a mission to help people embrace their own power and expand their own possibilities.