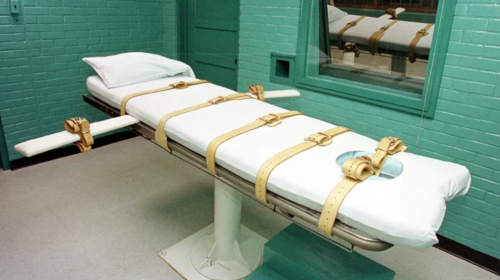 On April 1, The Supreme Court of the United States ruled against death row inmate Russell Bucklew’s appeal of his execution method. Nixing his claim that a rare medical condition would make the execution unconstitutionally “cruel and unusual” by virtue of being excruciatingly painful the Court (in an opinion written by Associate Justice Neil Gorsuch) held that the Eighth Amendment “does not guarantee a prisoner a painless death.”

SCOTUS has been the most prominent venue for opposition to the death penalty, but also the least effectual. Intermittent victories on procedural details produce false hopes that the Court will eventually find the death penalty as such an unconstitutionally cruel and unusual punishment. Then events like the retirement of Associate Justice Anthony “Swing Vote” Kennedy dash, or at least delay, those hopes.

The constitutionality of capital punishment has never really been in question. While some of the Constitution’s framers disliked the practice (“I should not regret a fair and full trial of the entire abolition of capital punishments by any State willing to make it” wrote James Madison, one of those framers and later President of the United States), it was common practice at the time of the Constitution’s ratification and has never in the round (as opposed to in particular details) been successfully challenged on constitutional grounds.

But it’s still wrong, and it still needs to go.

The claim of inherent jurisdiction over life and death — the claim of a “legitimate” power to kill disarmed prisoners, in cold blood and with impunity (as opposed to the currently violent, in defense of self or others, subject to requirement to justify the deed) — is the very definition of totalitarianism.  You can have limited government or you can have capital punishment. You can’t have both.

Over the last half-century, opponents of the death penalty in America have energetically chipped away at both its popularity and its political legitimacy.

Exonerations of death row inmates, and execution fiascoes resulting from Mengele-like experimentation with methods, have probably pushed us past the point of no return as state governments reconsider (and in some cases declare moratoriums on) capital punishment.

In 2016, two American political parties — first the Libertarian Party, then a few weeks later the Democratic Party —  enshrined opposition to capital punishment in their platforms.

In an era of ever-growing government power, this is one issue we seem to be moving in the opposite direction on. We should move faster. 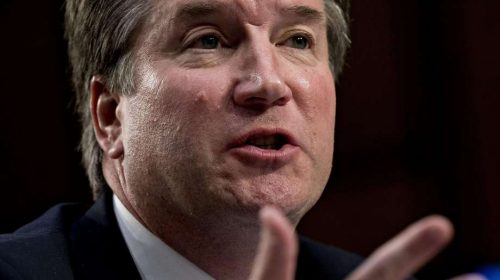 On September 28, Brett Kavanaugh squeaked through the US Senate Judiciary Committee’s vetting process on an 11-10 vote to recommend his confirmation as an associate justice of the US Supreme Court. The committee’s deciding voter, US Senator Jeff Flake (R-AZ), conditioned his final confirmation vote on the findings of a one-week FBI investigation into allegations that Kavanaugh committed one or more acts of sexual battery in his high school and college years.

I don’t want to minimize the relevance of those allegations. Obviously no one wants a rapist sitting in one of the country’s nine most powerful judicial seats . Nor do I believe that the allegations, if false, should weigh against a non-rapist’s aspiration to one of those seats.

But, as the TV pitch-men like to say, “wait — there’s more!”  More to Brett Kavanaugh. More to his life. More to his career. More to his qualifications. More to his demeanor. Setting the sexual battery accusations completely aside, the other stuff makes him an unattractive candidate for the job.

In the hearings, Kavanaugh tried to pass himself off as a regular guy who worked his way up the ladder on merit, not connections: “I got into Yale Law School,” he pointed out. “That’s the number one law school in the country. I had no connections there. I got there by busting my tail in college.”

Nope, no connections. It’s just coincidence that he’s a Yale “legacy” (his grandfather graduated Yale in 1928), that he attended high school at the exclusive Georgetown Prep (his father graduated Georgetown University), and that his father headed a large DC lobbying group representing more than 600 companies (the Cosmetic, Toiletry, and Fragrance Association, now known as the Personal Care Products Council). Surely Brett Kavanaugh would have risen to the top of his field even if he’d been born in a public housing project and attended public schools, right?

President Donald Trump was elected at least in part on a promise to “drain the swamp.” As a populist pledge, that would amount to smashing DC’s system of rule by entrenched, “connected” bureaucrats like Brett Kavanaugh.

With the exception of a couple of years as partner in a large law firm (doing political work even there), Kavanaugh’s spent his entire career in government and politics. Law clerk. Working on Kenneth Starr’s investigations of Bill Clinton. Bush campaign lawyer during the 2000 Florida fiasco. Associate White House counsel. Assistant to the President. White House Staff Secretary. Federal appeals court judge.

Kavanaugh is “in the club” and has been from birth. His arrogant and even angry demeanor in the Senate hearings seems less about the sexual battery allegations than about the gall and temerity of anyone to question his entitlement to a Supreme Court throne.

Brett Kavanaugh is the swamp. If Trump and the Republicans were serious about shaking up the federal government and breaking the grip of politically connected careerists on power, he’d never have made the presidential “short list” for SCOTUS, let alone have been nominated.

But they aren’t — and never were — serious. 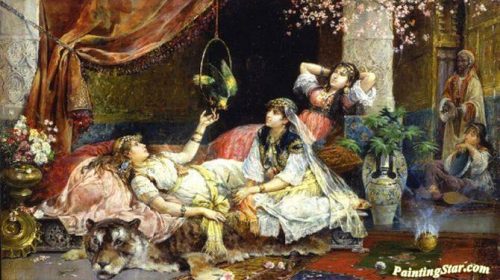 Boys will be boys.  Girls will be girls.  They will get into trouble, or they may get away with their peccadillos.  Most girls and boys will become women and men, respectively.  Some of the kids knew how to stay out of trouble, either by avoiding trouble, or less desireably by knowing how to fly under the radar.  But some adults build reputations by doing the things that are exclusive of trouble.  Some mentors avoid homosexual and pedophile scandals by NOT participating in the activities that lead to those scandals.

Some adult-aged children, however, cannot resist the halls of temptation.  If you want someday to be in an office that demands honesty, you cannot be partly responsible.  Your path is that of the saint.  You may not brush the flame, moth-like, and then pretend that you didn’t.  You need to dispense with drunken school parties, show biz, workplace hi jinks, and tail-chasing.  You need to be not like POTUS-32, 35, 42, 45.  You need to be unlike anyone who considers any workspace a sexual jungle gym.

We anarchists tend to think that government itself is bad, that a plethora of bureaucrats are bad, that politicians are creeps — and so they are.  But the worst part of any human endeavor are those who cannot follow objective, natural rules of not invading the lives of others, in narcissistically treating any circumstance as their Xanadu.

I myself did some underage drinking at the High School statewide Beta Club convention, but I never sought high office.  I partied on my own dime. 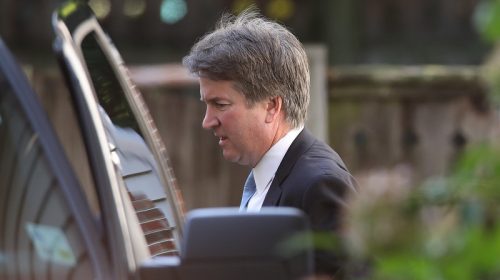 “How much evidence is required to destroy a person’s life?” conservative columnist Marc A. Thiessen asked in the Washington Post a few days earlier, weighing in on the same controversy.

Did he do that? I don’t know. You probably don’t know either,  nor do the 100 US Senators now weighing his confirmation.

I’m not going to express an opinion on the accusation, because I’m not qualified to offer anything but a gut feeling based on watching from afar.  Those 100 Senators, who really don’t have any choice but to express their opinions with their votes, are going to vote with their parties or on their own gut feelings as well.

But the hype … wow. In what universe does not getting a gig as one of the nine most powerful judges in the United States equate to having one’s life “ruined” or “destroyed?”

Brett Kavanaugh knocks down $220,600 per year as a judge on the US Court of Appeals for the District of Columbia. Absent impeachment proceedings, his job is safe, and even assuming such proceedings a 2/3 US Senate vote to convict on the basis of a decades-old accusation not related to corruption is extraordinarily unlikely.

If he is somehow forced or pressured off the bench, he’s a guy with options.  He’s a graduate of exclusive schools (Georgetown Prep and Yale) and a former partner at a $3 billion law firm (Kirkland & Ellis).

If he’s not confirmed, he’ll command five- and six-figure speaking fees, large book advances, talking head “analysis” gigs on cable news shows, etc. He could probably build a lucrative new career doing nothing but whining to conservatives about how he was robbed of a SCOTUS position.

Don’t worry too much for Brett Kavanaugh. He’s going to be fine.

Given his expansive views of government power to surveil, confine, and interrogate both Americans and foreigners, though, the rest of us might end up regretting his confirmation. 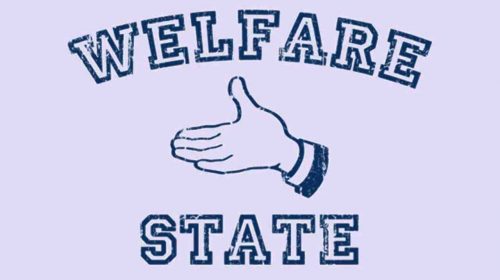 “Socialist governments traditionally do make a financial mess. They always run out of other people’s money.” — Margaret Thatcher

1: a social system based on the assumption by a political state of primary responsibility for the individual and social welfare of its citizens 2: a nation or state characterized by the operation of the welfare state system

The number of people on benefits is growing, while the relative number of people supporting those benefits is decreasing. There was a time when there were no benefits, and people were expected to exercise personal responsibility regarding their financial situation. Now, as much as 70% of American families receive more from the government than they pay in taxes. This is not sustainable, any more than it is moral.

Some may object to the inclusion of Social Security as a welfare benefit. After all, it’s your money, right? Wrong. SCOTUS ruled in 1937 (Helvering vs. Davis), “The proceeds of both [the employee part and the employer part of Social Security] taxes are to be paid into the Treasury like internal-revenue taxes generally, and are not earmarked in any way.” Social Security withholdings are just a sneakier part of the income tax. SCOTUS ruled in 1960 (Flemming vs. Nestor), “A person covered by the Social Security Act has not such a right in old-age benefit payments as would make every defeasance of ‘accrued’ interests violative of the due process clause of the Fifth Amendment.” Yeah, lots of legalese. It says more, but basically they don’t have to pay you, even though you paid them. I feel like I’m already spending too much time defending inclusion of Social Security as a welfare benefit, but here’s one more point: the first person who ever drew Social Security was Ida May Fuller. She paid in $22.54 over three years, and then drew $22,888.92 in Social Security benefits over the next 35 years. Clearly, benefits aren’t directly dependent on inputs.

If the recipients did this directly — without layers of bureaucracy between them and the victims — no one would be confused about the nature of this redistribution. Anybody could see it was theft, plain and simple. Tragically, legality confuses issues of morality for many.

Setting aside the issue of theft, a major problem with the welfare state is expressed well in the first definition: “a political state [assumes] primary responsibility for the individual and social welfare of its citizens.” Since when is it the role of government to be responsible for “the individual and social welfare of its citizens?” The very idea is nonsensical. As Southern Baptist preacher Adrian Rogers said, “The government cannot give to anybody anything that the government does not first take from somebody else.” Taking from some of its citizens would violate its responsibility to care for their welfare. And if it doesn’t take from them, it has nothing to care for the welfare of the others.