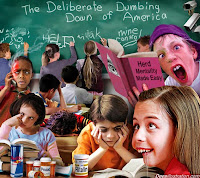 Traditionally, young people have energized democratic movements. So it is a major coup for the ruling elite to have created societal institutions that have subdued young Americans and broken their spirit of resistance to domination.

Young Americans—even more so than older Americans—appear to have acquiesced to the idea that the corporatocracy can completely screw them and that they are helpless to do anything about it. A 2010 Gallup poll asked Americans “Do you think the Social Security system will be able to pay you a benefit when you retire?” Among 18- to 34-years-olds, 76 percent of them said no. Yet despite their lack of confidence in the availability of Social Security for them, few have demanded it be shored up by more fairly payroll-taxing the wealthy; most appear resigned to having more money deducted from their paychecks for Social Security, even though they don’t believe it will be around to benefit them.

Why I Like Beatniks More Than Hippies
More Young Americans are Using Cannabis and Hallucinogens; That’s Good News
The Case for Legalizing Sex Work
Cracker Barrel’s Offering a New Sausage Option. The Response is Bananas.
We Blame the Parents
Jefferson on Not Trusting the State
Ozark
People Have Responsibility For Actions
How A Decentralized Education System Keeps Hubris In Check
What Happened to the Internet?