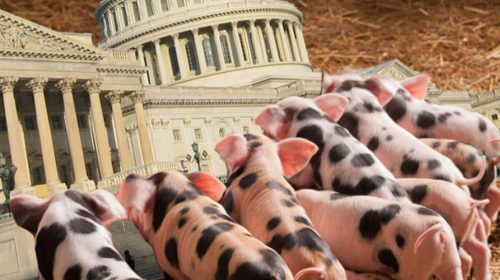 It’s that time of year: Citizens Against Government Waste just released its annual “Pig Book,” a compendium and analysis of pork barrel spending, aka earmarks, by the US Congress in 2019.

That sounds like a lot of money, and it is. But not nearly as much as one might think, in the scheme of things.

The federal government plans to spend more than $4.5 trillion in 2019. Those earmarks constitute a whopping one third of one percent of that total.

Critics of earmarks point out, correctly, that they’re used by members of Congress to direct federal spending to their own districts, not always with much “public good” justification (cue complaints about $500,000 for the Sparta Teapot Museum, $7.5 million for golf education, etc.)

True, all of it — but it’s baked into any political process. Whether formal earmarks exist or not, politicians will support bills that spend money in their districts, oppose bills that don’t, shill for their favored projects, and make deals to bring home the bacon.

And, it should be mentioned, earmarks do not directly increase total spending. They simply require that if Congress appropriates $10 billion for Purpose X, $1 million of that $10 billion be spent on Project Y.

The problem in that hypothetical isn’t the $1 million earmark, it’s the $10 billion appropriation.

The problem with the real numbers isn’t $15 billion in earmarks, it’s $4.5 trillion in federal spending.

If Congress has $9 million to spend on a fruit fly quarantine program and $3 million to blow on bad loans to ship buyers (among 2019 earmarks), Congress has too much money to spend on, respectively, Agriculture and THUD (Transportation, Housing, and Urban Development).

Congress DOES have too much money — money it takes from all of us via various tax schemes, and money it borrows in our names on the promise to bond-holders that it will beat us out of it, with interest, later.

Earmarks could be part of the answer to that problem.

If Congress specified in greater detail where and how EVERY dollar of EVERY appropriation must be spent, instead of just handing the dough over the executive branch under broad categories, we’d have a much better idea of where it was going — and be better prepared to protest, and bring pressure to bear against, wasteful spending.

It would also clarify “separation of powers” violations, such as President Donald Trump’s illegal and unconstitutional “emergency” misappropriation of  Treasury and Defense Department funds for his pet “border wall” project, making it easier to rein in presidential misbehavior.

Silly earmarks are fun to point out, but concern over them comes at the expense of addressing the bigger problem: The spending is too damn high.

Editor’s Break 096 has Skyler giving his commentary on the following topics: what he thinks the #BelieveWomen hashtag means; whether we should reduce the tax burden of the poorest 50% of society; the foolishness in taking your child’s “misbehavior” personally; and more. 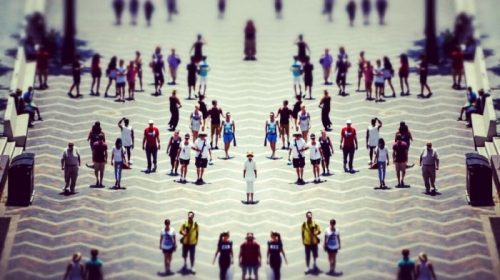 January 2019: I read this essay and added commentary for Episode 274 of the Everything Voluntary podcast.

Once a person adopts the label of voluntaryist (or the like) for their political identity, they assume, with good reason, the following premise: human suffering is terrible and should be prevented; aggression and coercion necessarily create human suffering. This premise leads the voluntaryist to hold a number of hypotheses with varying degrees of accuracy in some form or fashion within their minds at all times. Here are several of those hypotheses (in italics and prefaced).

Political aggression occurs when the production of law and order is coercively monopolized by a single person or single group of people (an institution, corporation, or firm in a given area which adopts the moniker of “government”). Monopoly incentivizes bad behavior and disincentivizes good behavior, leading ultimately to human suffering.

Economic aggression occurs when markets, the array of economic exchanges between people, are coercively interfered with by “government”. Political interference (or intervention) in markets skews or disables economic signals (prices, supply and demand), to the benefit of one group at one time, and the detriment of other groups at the same time or other times, leading ultimately to human suffering.

Parental aggression occurs when parents use the tools of coercion (punishments like spanking and time-outs) to correct what they identify as “misbehavior” on the part of their children. Punishment used to discipline is both a failure to understand a child’s real needs and produces trauma in childhood, leading ultimately to human suffering.

Educational aggression occurs when parents and teachers use the tools of coercion (punishments, rewards, curriculum) in the attempt to impart knowledge and skills onto children that they, the parents and teachers, deem necessary and important toward becoming an adult in society. Coercion based learning ignores the interests and passions of students and their evolutionarily programmed needs to inquire, be curious, to move constantly, be loud, and to play, leading ultimately to human suffering.

Not every hypothesis described above undergirds the premise that each person who has adopted the label of voluntaryist holds as true. Many voluntaryists haven’t even considered the effects of coercion in parenting and education, for example. But the premise as laid out above is typically held by those who identify as a voluntaryist.

The voluntary principle, the foundation of voluntaryism, states that “all human relations should happen voluntarily, or not at all.” It’s easier to understand the “should” in that sentence once you understand the voluntaryist premise. You may not value or desire the reduction and prevention of human suffering, in which case you are unlikely to identify as a voluntaryist. However if you do, then I recommend taking a hard look at the premises you accept as true, and how realistic are the hypotheses thereon based that you rely on for the attainment of this desire.

Editor’s Break 086 has Skyler giving his commentary on the following topics: why he shouldn’t have to apologize for the misbehavior of other white people today or in the past; how technology is necessary to make the state obsolete and bring about a free society; “gun free zones” are really “self-defense prohibited zones” and why the school shooting narratives are all wrong; and more.

Editor’s Break 073 has Skyler giving his commentary on the following topics: what good parenting is; why it’s important to mind your own business and how to balance that with community vigilance; how to deal with misbehavior, such as a toddler spitting on your face; the courage in sticking with your principles, especially when it means standing alone; whether or not we should be concerned with Russian propaganda and election meddling; and more. 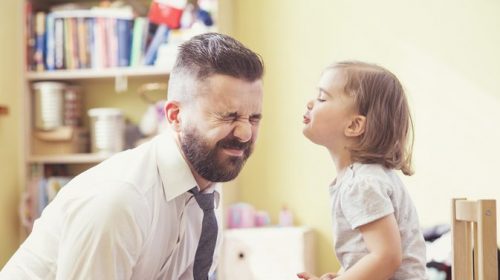 My three-year-old is full of life and has a great, fresh sense of humor. Her favorite word, if you ask her, is “fuck!” She uses it quite often, much to the delight of myself and her older siblings.

A few weeks ago, she started spitting. This doesn’t seem uncommon for little kids. They eventually discover the process and she found some joy in it. So much so, that she thought she’d share it with me, and spit right on my face.

I could have turned sour, and angry, and yelled at her, or slapped her, or spanked her, or put her in time-out, or some such other form of punishment to “teach” her that spitting on people’s faces is “wrong”.

But I didn’t do any of that, not even the turning sour or angry bit.

Rather, I playfully spit back, right on her face. What did she do?

She took stock, and then let out a giggle! And then spat on my face again.

I performed in kind. Then her again. Then me. Then her. Then me.

Then she stopped. Both of our faces covered in each others’ spittle. Just dripping with it.

She was done giggling, and was now wiping it off with a slight look of disgust, realizing her mistake.

She hasn’t spit on my face, or anyone else’s face, since.

I’d say the “problem” has been solved. It didn’t require any negativity or fear or shame. All it took was some playfulness, and she eventually realized that spitting isn’t all it’s cracked up to be. She satiated her curiosity (which is all it was in the first place), and moved on with her life.

Every “misbehavior” we see in children can be solved in playful ways. Punishments are never required, and always lead to unintended consequences, much to the detriment of the child, their associates, and the rest of society.

I stopped foolishly using punishment in the way I parent going on seven years now. If you feel like improving your relationship with your children and solving behavioral problems, let me know. I’m happy to help!