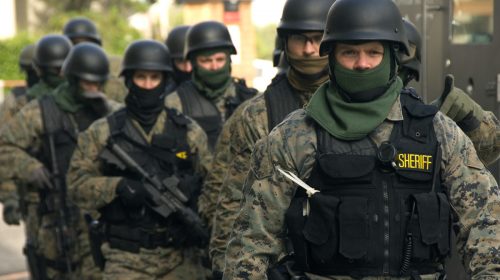 The claim often heard from those attempting to pass more gun control legislation is that all they’re trying to do is get the “weapons of war off our streets,” but it’s simply untrue that “weapons of war” are available to the general public. You’d last about three minutes in a conventional war with an AR-15, even with one of the most aggressive builds you can get your hands on (that doesn’t mean it’s impossible for guerrilla uprisings to defeat powerful enemies). The truth is that the only people with “weapons of war” on America’s streets are, increasingly, the police.

Thanks primarily to the Pentagon’s 1033 program which allows law enforcement agencies to get their hands on Department of Defense technology and the Bush-era War on Terror, American police have received a startling amount of heavy-duty, military-grade hardware. Between 1998 and 2014, the dollar value of military hardware sent to police departments skyrocketed from $9.4 million to $796.8 million.

And just as when “all you’ve got is a hammer, then everything looks like a nail”, militarized police have become more willing to use their new weapons when carrying out law enforcement tasks. For example, the number of SWAT raids in the United States grew dramatically from about 3,000 in 1980, to a whopping 50,000 SWAT raids in 2014, according to The New Jim Crow by Michelle Alexander.

To say that the militarization of the police is nothing new is to ignore America’s recent history as well as the long-standing model of a peace officer. As the police have militarized and the Pentagon backs major players in Hollywood, the focus has shifted from one who keeps the peace to one who enforces the law – and that’s an important difference.

Continue reading Weapons of War On Our Streets: A Guide to the Militarization of America’s Police at Ammo.com.