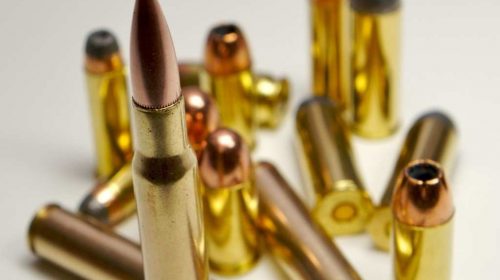 To understand how American citizens today can get their hands on ammo, which rolls off the same factory lines as those that supply the world’s largest militaries, it’s important to first understand how munitions technology developed. Starting in medieval Europe, on a battlefield where a mounted knight in armor could defeat almost any number of peasants, the development of more advanced and accurate ways to destroy enemy personnel and equipment by launching a projectile is one which combines trial and error, scientific ingenuity, and private enterprise. It’s a story of power and technology dating back to the 13th century, at the height of “the divine right of kings,” and tracks the subsequent diffusion of that power held by a chosen few as the individual became capable of breaking the state’s monopoly on violence.

The first recorded use of gunpowder appeared in Europe in 1247, although China had used gunpowder for centuries before that, mostly for fireworks. The cannon appeared nearly 100 years later in 1327, with a hand-sized version making its debut in 1364. The first ordnances were made of stone, and while it might have been theoretically possible for anyone to own one, this would have been outside the financial reach of anyone but the nobility.

Stone was quickly discarded as a source of materiel for one simple reason: It wasn’t effective against stone fortifications. Thus did the first ever arms race begin, as medieval armies sought ways to fire heavier and heavier projectiles. The first recorded example of a metal ball being fired from a hand cannon came in 1425, with the invention of the hand culverin and matchlock arquebus, which led to lead balls becoming the gold standard for projectiles. This is where we get the term “bullet” – boulette is French for “little ball.”

Ammunition remained largely the same for centuries: Little balls of metal virtually anyone could make. This was true until the invention of rifling in the mid-19th century. Even this invention was, at first, not terribly useful for military purposes. Not only did the barrels quickly become useless, but the barrels often could not be fitted with a bayonet. This made early rifles impractical for military use and mostly a bit of a toy. Not until the advent of progressive rifling (which came, depending on one’s point of view, fortuitously or not, in the middle of the U.S. Civil War), did rifles become practical for military, and also widespread civilian purposes.

Copper jacketed bullets arrived in 1882, but since then the development of both military and commercial ammo has largely been about degrees rather than revolutionary innovations like rifling. The same basic design for cartridges has been in place since the late 19th Century.

Advancing technology was likely a driver in the move toward ammunition produced for commercial purposes, rather than simply military use. While in the past, it was common to simply make lead balls in front of the fire as a family after dinner, making a modern rifle cartridge is far beyond the means of most people. Further, it requires safety procedures above and beyond simply molding lead balls.