If you live in a major city in the US, you’ve probably already borne witness to the scooter revolution.

For short distance trips down city sidewalks, the motorized, smartphone-unlockable scooters provided by companies like Bird and Lime are kicking butt and taking names. The scooters are easy to ride, easy to access (they’re just lying there on the side of the road), and easy to dispose of (again, you just leave them lying until a Bird or Lime employee comes by). Just grab and go – that seems to be what has made these scooters such a big hit.

With so many Birds and Limes already scooting around Atlanta’s Midtown district, I decided that I wanted to give one a try. I downloaded the app and headed eagerly over to a Lime scooter parked on the side of the road. I was giddy with excitement, dreams of zipping down Atlanta sidewalks scooting through my head. 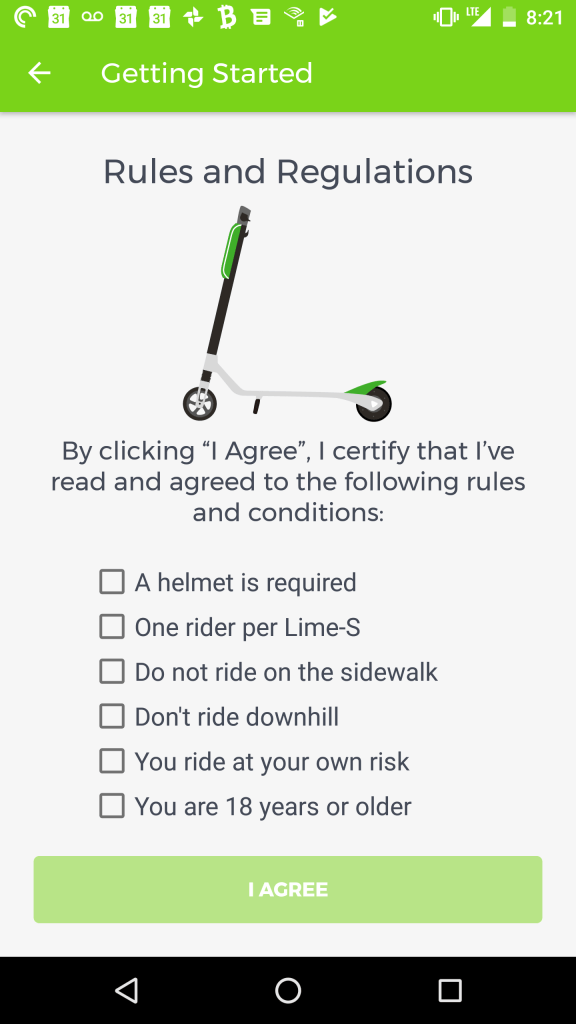 I was aghast. *No one* I had seen using these amazing scooters had been wearing a helmet. No one had been crazy enough to get off the sidewalk and onto the dangerous car-packed Atlanta streets. And since then I have seen at least a couple of couples sharing a scooter safely.

What’s more, if people actually followed these posted rules, they wouldn’t be using scooters as a way to get around in the first place. Bird and Lime and companies like them have swept the country because they have offered unmatched convenience for young people who want to get around in their cities. And the funny thing is, everything that makes Bird and Lime convenient (and successful) is either against safety regulations or against Bird and Lime’s own terms of use.

Two of these rules in particular (no doubt related to government regulations) reflect the very reasons we *haven’t* had a scooter revolution before now:

I didn’t take a ride that day, as I decided not to agree to terms of use I wouldn’t keep. But I was furious. These safety regulations (if followed) could stop these wonderful machines cold and kill the scooter revolution.

The key words there were “if followed.”

I may be a rule-follower, but I’ve been around long enough to know that the world needs rule-breakers. And while Bird and Lime may be taking the legally sound route of strict terms of use, their early adopters are taking the technologically-sound route of doing whatever the hell they want.

This is the great secret behind Bird and Lime’s success: no one is following the restrictive helmet and sidewalk rules, and few people ever have. Without much of a conversation, I think we have all realized that the safety regulations that would attempt to constrain the scooter revolution are ridiculous.

And this is why the safety regulations won’t succeed. In choosing to ignore them, we consumers have given fuel to a new industry that will soon be here to stay. Lyft and Uber had a rough few years of battling it out city by city against conservative local governments and corrupt taxi cartels, but they won because people prize convenience. Now the scooter revolution – also offering convenience – is here to mop up the remainders of old guard resistance against transportation innovation.

Judging by what I see on the streets, the war is already won, and with hardly a single political shot fired. The mundane (and even unintentional) mass civil disobedience of Bird and Lime users is a model of how entrepreneurship and creativity can change industries and cities for the freer. And that’s a reason to be hopeful.