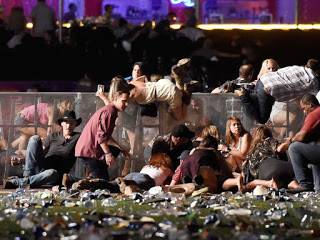 Just look at this picture and notice how safe those disarmed-by-law people seem to be. It must warm Nancy Pelosi’s heart-like blood pump.

It has been reported that “security” was checking attendees for weapons as they entered the Las Vegas concert area.

But the Mass Murderer Cheerleader Club is dancing in the blood of the dead and wounded, calling for more of what failed to save lives. As they always do. Anything these idiots propose would enable more evil losers to kill more people. It’s the inevitable result of everything they cry out for.

Do I believe they have “good intentions”? Maybe. Some of them do. But others know enough to know exactly what they are advocating. They know where their path leads, and they don’t care. They want it anyway.

In this case, the policies didn’t make anyone safer, but didn’t really contribute to the death and destruction, either. If you have a policy that doesn’t help, but can hurt, you are stupid or evil– maybe both– to keep implementing it. You are definitely evil to advocate doing more of it, harder.

Yes, that’s right: stricter “security” won’t stop things like this, but will only make them easier to commit. “Security” could have made everyone strip and attend the concert naked after being probed, chemo-sniffed, and rape-scanned by TSA machines. It wouldn’t have saved one life– unless you count those who would refuse to be treated this way to attend a concert and went elsewhere.

Sometimes there’s just nothing you can really do when some evil loser decides to kill people. But that’s no excuse to keep doing the wrong things; things that never help and sometimes hurt.

Anti-gun bigotry is wrong. It is evil. It kills innocent people. Don’t enable the bad guys by trying to restrict guns; fight back by refusing to be unarmed.

I know, pointing this out isn’t nice. Sorry, but I’d rather be good than nice.