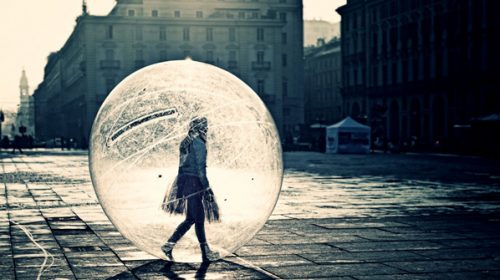 Einstein examined many of the principles of the physical world by doing what he called “thought experiments”. These were hypothetical idealized situations that he created in his mind in order to isolate and examine the nature of physical phenomena. Einstein did not invent thought experiments, but he used them quite effectively to develop some of the most unbelievable yet successful theories of science.

Let’s take an example. Einstein discovered the equivalence of gravity and acceleration (a founding principle of general relativity) by imagining a man trapped in a windowless spacecraft far from any gravitational bodies. The spacecraft is accelerating in space such that it produces a force on the man inside the craft equivalent to his resting weight on planet earth. Einstein then asked himself “What experiment could this man do in order to determine if he was actually resting on earth or accelerating through space?” After many attempts to contrive such an experiment, he concluded that there was no experiment that the man could perform in order to distinguish between the two situations of either resting on planet earth or accelerating through space. He concluded that gravity and acceleration were physically equivalent, an astounding revelation that went against common sense, yet formed the basis of general relativity. A simple thought experiment revealed a hidden fact about nature and spawned a whole new scientific theory.

So it seems that idealized hypothetical thought experiments do help us understand the nature of the real world. They are models that remove confounding causes and effects which muddle our ability to apprehend the fundamental nature of things. Thought experiments, like science and logic, can reveal a world that is simple in its fundamentals. Science has shown us that complexity emerges from the interaction of a few basic laws. So stripping the world down to uncover these simple fundamentals is paramount if you want to understand the real world. The thought experiment herein is designed to do just that.

The goal of the present thought experiment is to explore how much of existing social institutions, practices, and human relationships depend upon physical violence or the threat of it in order to function or exist. So let’s imagine that we could somehow eliminate any capability of one human being to physically harm another human being. We might do this by imagining every individual as having the ability (at will) to turn on or off an impenetrable bubble that surrounds their bodies and/or their personal property. Or perhaps we could imagine that humans have indestructible bodies and personal effects. Or that God has decided to protect everyone’s person and belongings. Whatever mechanism we choose to imagine (I’ll leave it up to the reader), the model trait is simply that no human being is capable of physically harming another human being or damaging/seizing their belongings. All other human capacities, capabilities, weaknesses, and relations remain intact.

Armed with this model, we now ask ourselves two questions: “What social institutions or common human interactions become ineffectual in such a world?” and “What kinds of institutions could humans develop in order to create a working civil society?”

In answering the first question, we might realize that police or even armies would be unnecessary because no one could physically harm another individual or seize their property. Self defense by counter violence would become obsolete.

It also appears that laws could not be enforced because threat of punishment could not be administered. In fact, no authority or government agency could impose itself on any unwilling individuals within any population. Only individuals who voluntarily cooperated or could be persuaded to cooperate by mutual benefit (not punishment) would follow any dictates from any other person, authority, or form of government.

But wouldn’t society collapse into pandemonium if laws could not be enforced? Let’s consider it. People still need to eat, have clothes on their backs, and places to live. These are human needs that we would collectively need to fulfill. Since we all would be incapable of robbing others to get what we wanted or needed, it would appear that voluntary cooperation, negotiation, persuasion, and trade would become a necessity if we all wanted to survive. Physical strength employed as domination and laws would have to be replaced by something else: the capacity to effect win-win trade between individuals, groups, and organizations. All coercive force would be absent.

Trade could certainly include the trade of physical labor or other services that could be rendered between human beings as well as the production of tangible items. People would still survive by means of their physical labor, strengths, or talents to produce goods and service which they could use to negotiate for other goods or services from other people. Any human capacity that could be turned into an asset for others would be an asset to the individual for his own survival. Physical strength, health, and intelligence would still be necessary for survival. The only difference is that physical strength and intelligence could not be employed for domination but would remain indispensable assets for human survival. All present human traits and capacities would still be needed and employed just as they are today.

Let’s look at human organizations. Freedom of association would be alive and well. Individuals who shared common belief systems or common values would still be free to form groups or organizations dedicated to a purpose. Multiple solutions to social problems or needs could still be effected through voluntary cooperation and mutual benefit. The commonality between all such organizations or solutions would be that they would have to rest on willing participants. Laws could not be used to effect political or social structures that force everyone into compliance of a single solution.

All “social duties” presently imposed by laws could not be effected. Our only social duty would be to effect willing cooperation of others to get what we all wanted or needed. In other words, we could only create a world made possible by people’s own decisions and choices about what is important to them individually. Those who now attempt to impose their moral vision on others would not be able to take up moral authority and dominate. Again, they would have to persuade by mutual benefit not threat of violence.

In a world of voluntarism, where violent enforcement is impossible and people are interdependent upon one another for survival, a person’s honesty and trustworthiness would be their currency. If anyone’s dealings with people proved to be dishonest or deceptive, no one would make any future deals with them and they could quickly find themselves destitute and unable to survive. One’s word had better be as good as gold, literally. Destitution would be the natural punishment for dishonesty or corruption. No one would associate or deal with a known dishonest person.

It appears to me that many social institutions we have today in our modern “civilized” world are just re-adaptations of the law of the jungle, where the fight for dominance is alive and well. We have not really left the jungle, we have have simply created and entered a new one. It is a jungle masked by technological progress, but having it’s basis in violence and domination nonetheless. The few still control the many. So until such things as impenetrable bubbles are invented or God decides to make physical domination impossible, we all just have to be persuaded to ascribe to two fundamental principles: non-aggression and voluntarism. These two foundational principles have the potential to maximize individual liberty and make police and governments obsolete.

Rebellion is Harder than it Looks
Gun Rights are Decent Political X-ray
“Red Flag” Laws Violate Human Rights
Don’t Let Politicians Use Pandemic as an Excuse for Dictatorship
Guns – Time to Try Something Different
Yale Study: Vast Majority of High Schoolers Unhappy at School
Coronavirus: Politically Created Panic is the Real Pandemic
Here Are 6 Ideas For Parents While Schools Are Closed
You Are Not Alone
The Politics of Panic are Far Deadlier Than the Coronavirus