3 for 3! Scar Gets Another Ticket Kicked Out in Tucson

A big congrats to Scar for getting a third complaint kicked out in Tucson, Arizona.  And thanks for the documentary proof below.  Scar also discusses this in great detail on the forum.

Scar sent this email to me:

Hey Marc, got my third dismissal today.  Although the judge didn’t grant the MTD, he granted a motion by the state to dismiss it without prejudice because they failed to disclose evidence.  I tried ask what evidence, but just am not quick enough with these liars and con artists… they really are terrible beings that shouldn’t exist on this earth.  I posted all about it here: http://marcstevens.net/board/thread-8282-post-65613.html#pid65613 and have attached the order.  Please remove my name and the case number if you want to post it.  Thanks for all you do

Scar filed the motion to dismiss and discovery/Brady request.  The prosecution could only allege a written instrument from 1910 (Arizona Constitution) applied to him because he was physically in Arizona.  However, as no evidence exists, the prosecution could not provide any proof or a witness with personal knowledge.

So the prosecution, as we’ve seen so many times before, filed their own motion to dismiss, which the judge granted: 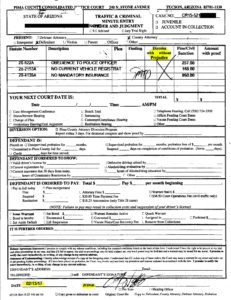 There is no credible direct evidence why the prosecution chose to withdraw their complaint.   We do have circumstantial evidence though from Scar if you read his posts on the forum.   A short summary:

Today just had the ninth forced appearance in court–a trial was scheduled and the state moved to dismiss without prejudice because they failed to follow some discovery/disclosure rule.  I tried to go back to my original questions and shoot for a dismissal with prejudice but I’m just not fast enough with with these liars and criminals…. like James Bond, I do have more important things to do… so will take it as a minor win… we all know there is no case to be re-filed, although it would have been more of a win to get the MTD granted and potentially seek damages for my nine forced appearances under threat of death.

Scar reported that judge Peyton claimed the prosecution failed to disclose the police officer’s name, that’s why they chose to dismiss.  I don’t find this credible because Scar had the ticket with the cop’s info:

I was trying to point out there is no evidence or qualified witnesses, but he is trying to spin it that “oh, the state just forgot to disclose the name of the cop to you and so they failed on a procedural error”.

It seems that if that were true, then the prosecution would have moved to reset the trial date or just re-file the complaint the same day.  There was no prejudice to Scar as he already knew the cop’s name.  Dismissal in such a case, usually held as a harmless error, is just so drastic.  The history shows this was a tenacious prosecution, several judges involved and nine forced appearances.  The prosecution was hell bent on prosecuting Scar regardless of their lack of evidence and competent witness.

This is not a matter of a judge holding the prosecutor to the rules regardless of prejudice or not, it was the prosecution who moved for dismissal.  They fought adamantly for almost a year to then drop it on a minor issue with no prejudice?

Pros: Your honor we failed to provide the cop’s name and we’d like to dismiss.

Judge: You mean the cop’s name that’s on the ticket, which the defendant has had for almost a year?

I guess the matter will be settled if the prosecution refiles the complaint.  If not, I would take that to mean there was no merit to the claim they withdrew because the prosecution failed to disclose the cop’s name.

Either way, Scar gave the prosecution and judges hell by focusing on the prosecution’s lack of evidence and qualified witness.  There is no evidence proving some written instrument from 1910 (Arizona Constitution) applies to Scar just because he’s physically in Arizona, and certainly no competent witness.